Learn How to Make Crispy Hash Browns at home. They ​​always turn out golden brown like the diner, are easy to prepare, freezer-friendly, and the perfect addition to breakfast.

Have you ever wondered how diners and breakfast restaurants get their shredded hash browns to turn out so crispy and delicious? Now you can make restaurant-worthy crispy hash browns at home! Using a few simple tips and secrets, you’ll never have to suffer through soggy hash browns or boring frozen potatoes again.

Learning How to Make Crispy Hash Browns is easy. Using the right kind of potatoes and a few preparation secrets, you’ll be pan-frying your shredded potatoes to golden brown perfection in no time. They’ll quickly become a staple at your weekend breakfast or brunch to pair with your bacon, scrambled eggs, cheesy omelette, pancakes, and sugar donuts! You can even use them in my Amish Breakfast Casserole!

What kind of potatoes are best for hash browns?

You’ll need a hearty, starchy potato before making homemade hash browns. Russet potatoes are the best choice because they’re full of starch and are great at crisping. Waxy potatoes, like red potatoes, won’t work because they contain too much moisture and won’t crisp as well.

How to make crispy hash browns in a frying pan

Peel the potatoes and grate them using a box grater or the grater tool on a food processor.

Lay the shredded potatoes on a clean kitchen cloth. Wrap the cloth around the potatoes and use your hands to squeeze all of the excess moisture out over the sink.

Now that your potatoes are ready for frying, heat some oil in a frying pan on medium-high heat.

Lay the drained potatoes in an even layer in the pan. Add salt and pepper on top and let them cook undisturbed.

Once the bottom is golden brown, flip the hash browns over to cook on the other side.

How to make Potatoes O’Brien

Take your hash browns up a notch by making Potatoes O’Brien. This classic side dish is made with fried potatoes, onions, and bell peppers. There aren’t any fancy steps here – just make the hash browns as-is, then throw in some peppers!

The secrets behind the crispiest pan-fried hash browns

Can you freeze hash browns?

Yes! To freeze the uncooked hash browns, spread the shredded potatoes on a lined baking sheet and place them in the freezer. Once they’re solid, transfer the potatoes to an airtight container or sealed bag and freeze for 3 to 6 months. They can be cooked right from frozen or thawed. 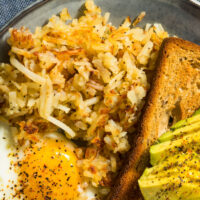 Print
Learn How to Make Crispy Hash Browns at home. They ​​always turn out golden brown like the diner, are easy to prepare, freezer-friendly, and the perfect addition to breakfast.
Prep Time: 10 minutes
Cook Time: 10 minutes
Total Time 20 minutes

Course:Breakfast
Cuisine:American
Keyword:crispy hash browns
Did you make this?I love seeing what you’ve made! Tag me on Instagram at @BrooklynFarmGirl and don’t forget to leave a comment & rating below.