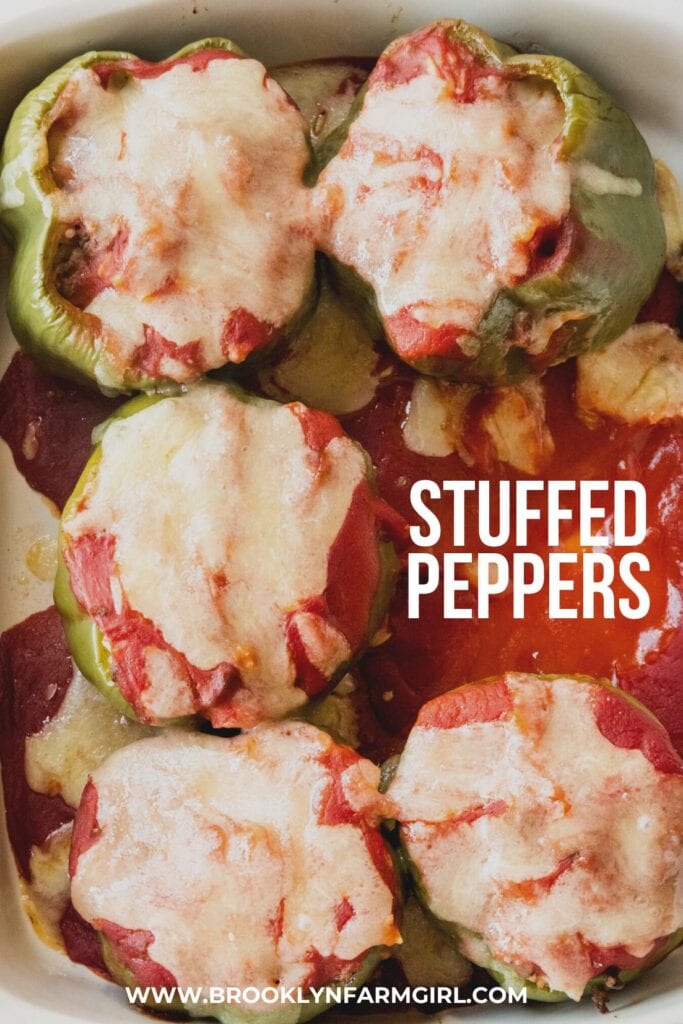 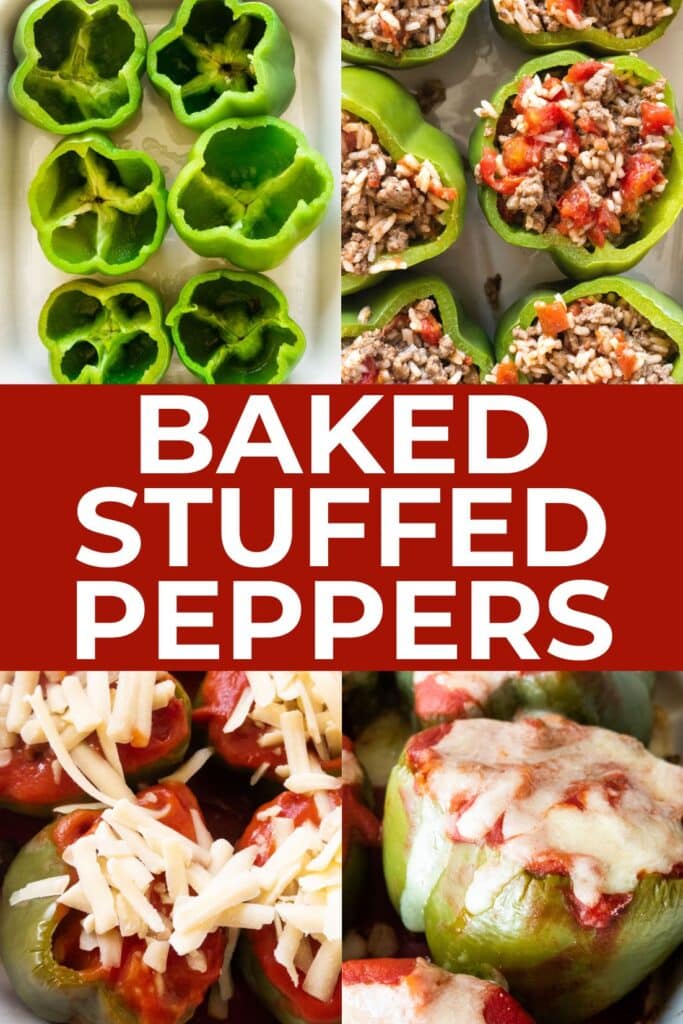 Stuffed peppers are such a memorable food from my childhood. My Mom used to make stuffed peppers at least once a month, usually for Sunday dinner. Now many years later, I’m making them for my own family.

This easy stuffed peppers recipe is super simple to make with basic ingredients, but is still filled with flavorful filling (ground beef, rice, onions, garlic, Worcestershire sauce and more) and comfort. Add shredded cheese to melt on top and you have my favorite stuffed peppers ready to serve for dinner!

How to Make Stuffed Peppers

Boil water in a large pot and add peppers. Drain and place in a baking dish. You’ll want to use either a 11×8 or 13×9 baking dish to make sure the peppers fit.

In a large skillet, cook the ground beef, chopped onions and garlic. Drain meat to remove fat and season as desired.

Add in the broth, tomatoes, rice, sauce, and mix while cooking.

In a medium bowl, mix tomato soup and water. Pour over peppers. I like saucy peppers, never dry, so this assures there’s enough sauce!

Remove from the oven and allow to cool for a few minutes. Serve and enjoy!

Store leftover stuffed peppers in an airtight container or wrapped in plastic wrap and keep in the refrigerator. If stored properly, they should remain good to eat for up to three to five days.

To reheat stuffed peppers, just place them on a microwave-safe plate and cook them in the microwave for up to two minutes. Once done, take it out and check the middle to see if it needs to be heated more.

Should peppers be cooked before stuffing?

Yes, you should cook the peppers before baking them. I find the quickest and easiest way to cook them is in boiling water for 5 minutes. This ensures the peppers are tender and not too crunchy or raw tasting.

Should stuffed peppers be covered when baking?

Yes, cover the stuffed peppers with foil and bake for 25 minutes. This will soften the peppers perfectly. After 25 minutes, uncover them, add cheese to the tops and bake until cheese is melted.

What cheese is best for stuffed peppers?

I have always had mozzarella cheese on my stuffed peppers since I was a kid, but you can also use shredded cheddar, Monterey jack, or parmesan cheese.  No matter what cheese you pick, I recommend a thick-cut shredded cheese as it melts better on the peppers.

Are bell peppers good for you?

Yes! Bell peppers are rich in antioxidants and vitamins. They are most known for being a good source of vitamin C. Bell peppers are great for the average diet. It definitely depends what you pair it with though. This recipe includes a good portion of protein which is another great component to a typical, healthy meal. Peppers stuffed with protein are a great combo.

Do you eat the pepper in stuffed peppers?

Yes, you can and should eat the pepper of a stuffed pepper! As mentioned above, bell peppers are great for you and full of vitamin C. However, you can also eat the stuffing with a spoon if you prefer.

If you love this recipe, make it in casserole form. Check out my Easy Stuffed Pepper Casserole. You can also check out my other stuffed peppers recipes and more: 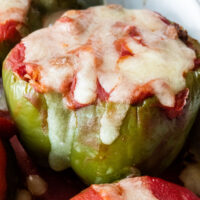 Course:Main Course
Cuisine:American
Keyword:stuffed peppers
Did you make this?I love seeing what you’ve made! Tag me on Instagram at @BrooklynFarmGirl and don’t forget to leave a comment & rating below.