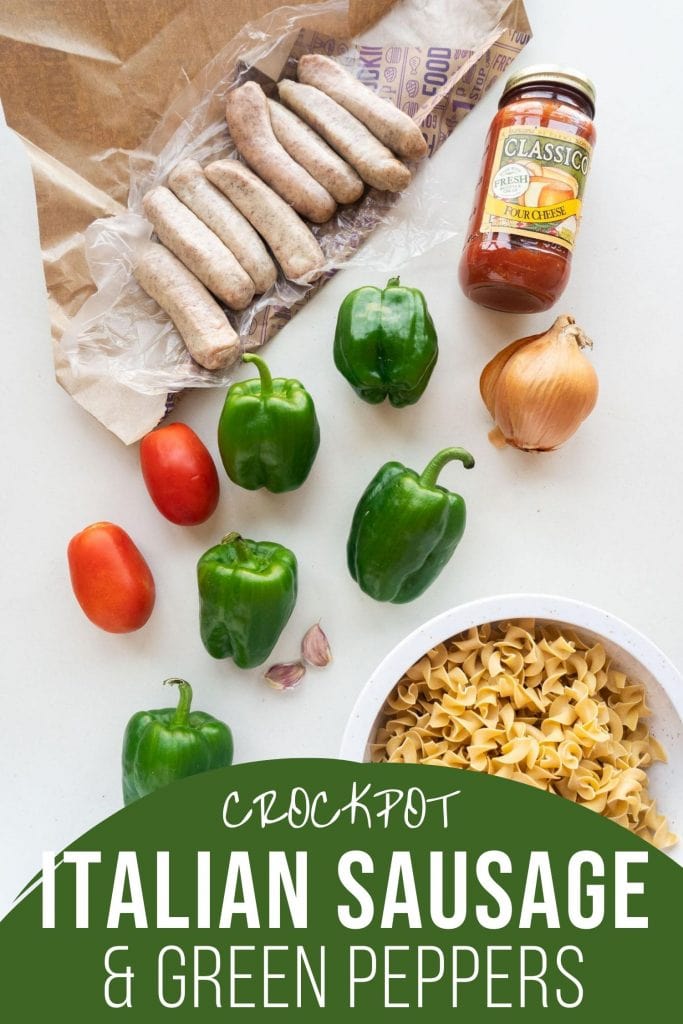 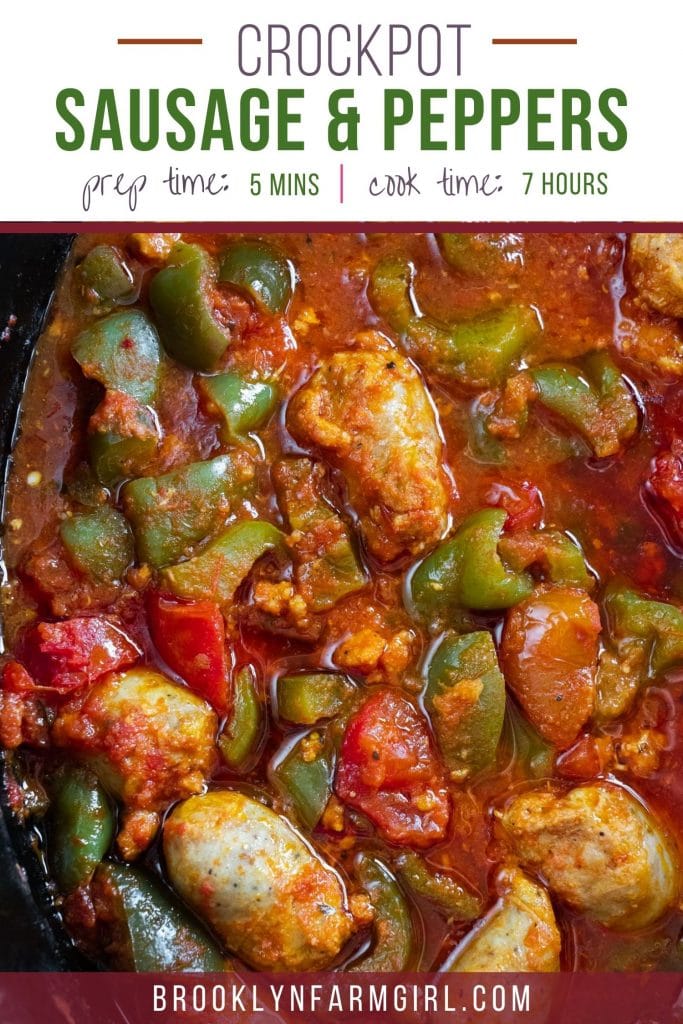 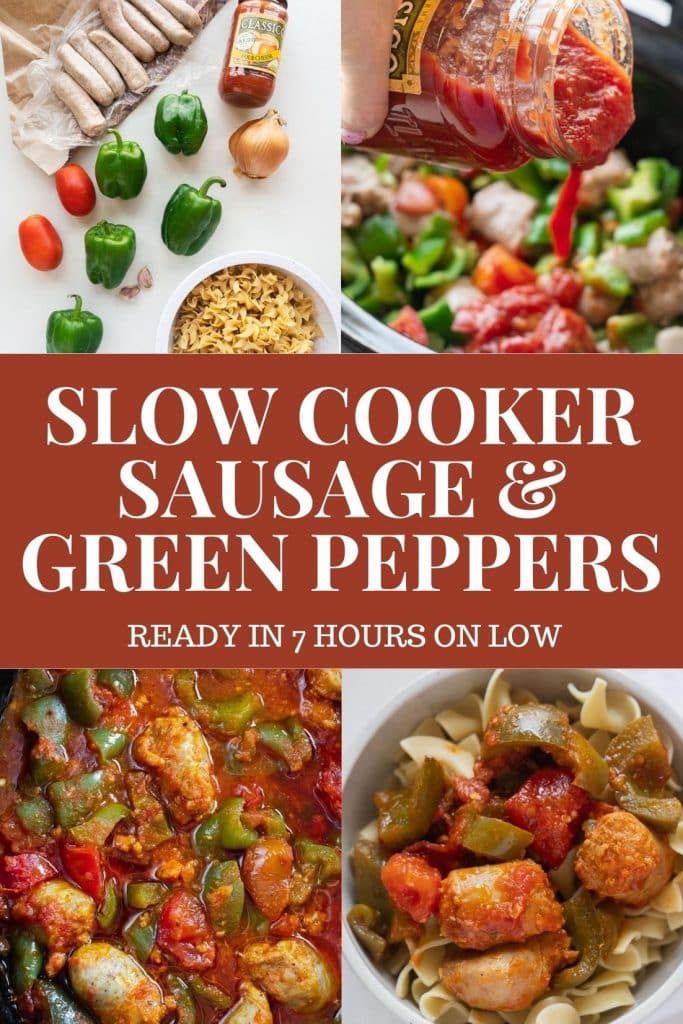 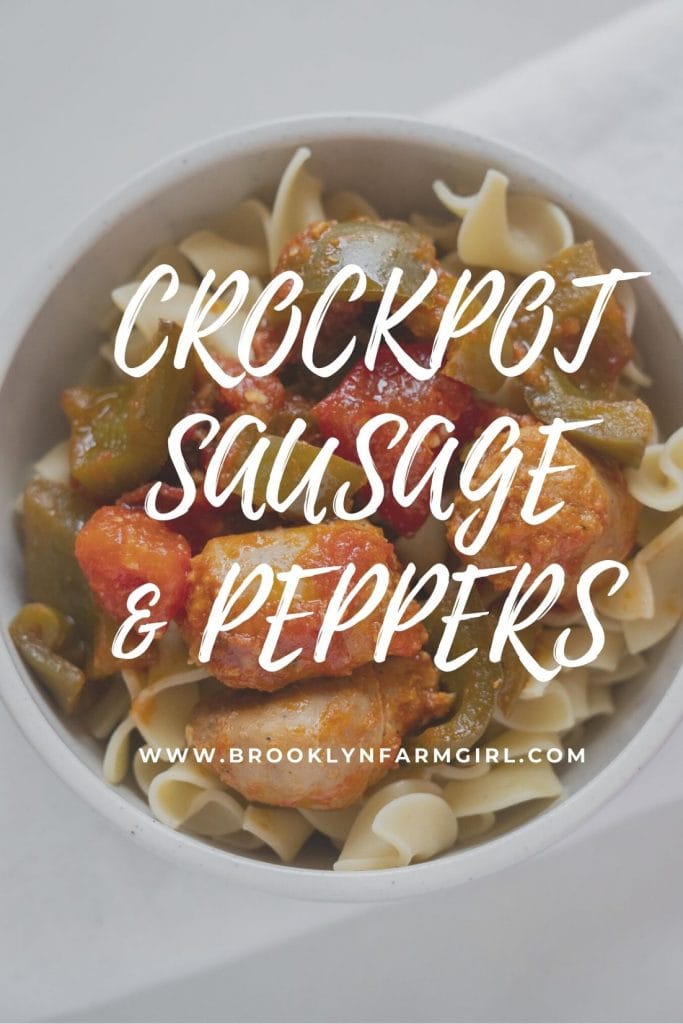 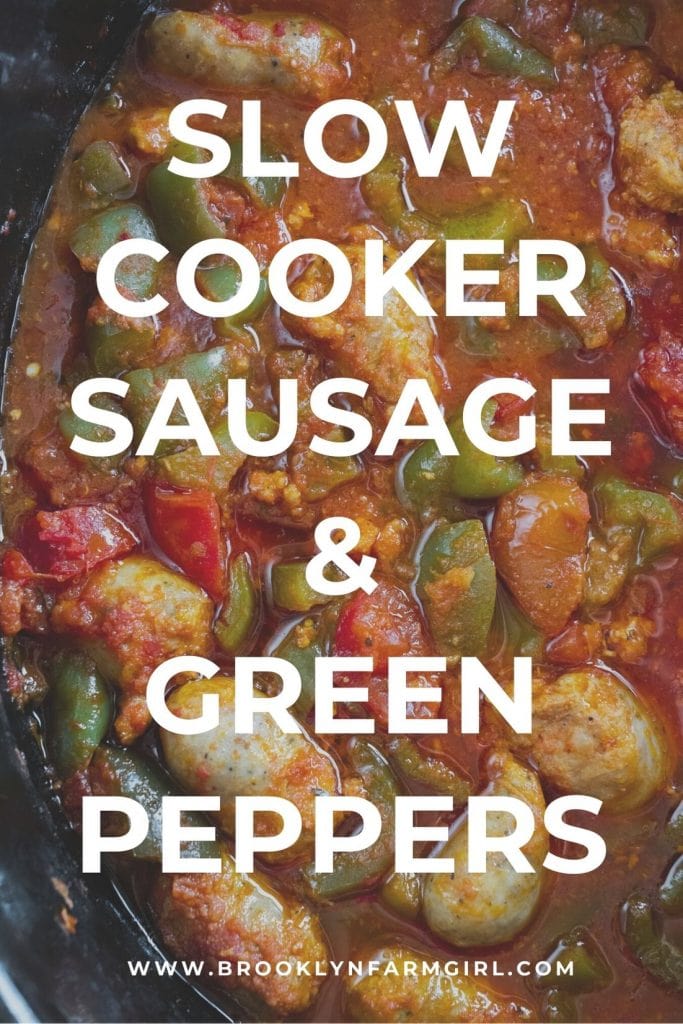 Easy to make Slow Cooker Sausage and Green Peppers served over pasta recipe. This crockpot meal is made with 5 green peppers, onions and Italian Sausage, ready in 7 hours.

What’s not to love about this Slow Cooker Sausage and Green Peppers Recipe? It’s made with Sweet Italian Sausage, green peppers, tomatoes and onion, all cooked in your favorite tomato sauce.

It’s easy to make – you just put in all the ingredients and let your crock pot do all the work for 7 hours. Once it’s ready, make some egg noodles and serve the sausage meal on top of that. And just like that, you have a delicious homemade dinner ready to eat!

Because it’s bell pepper picking season in the garden, I’m often left with a handful of peppers everyday. There’s so many green pepper recipes my family loves, but this is one of our favorite meals because it uses 5 green peppers!

If you wanted to double (or even triple!) this recipe to cook for a large group, you totally can. All you have to do is double the ingredient amounts, that means 10 green peppers! Alternatively, you could even make a double batch of this and freeze for later on. This is another great idea if you’re picking lots of peppers in the garden right now!

This is a simple list of ingredients to pick up at the grocery store (and your garden!).

Slice Italian Sasusage into 2 inch pieces. You can use sweet sausage, hot sausage or a mixture of both. Chop up bell peppers, tomatoes and onion. Mince garlic (I love using my garlic press!).

Pour pasta sauce on top of everything, mixing with a spoon.

When there is 15 minutes remaining on slow cooker, cook egg noodles according to bag. Place egg noodles on plate or bowl, and serve sausage and vegetables on top. (Want something else besides egg noodles? Read my suggestions below). Now enjoy this Slow Cooker Sausage and Green Peppers meal for dinner!

I’m a big fan of serving this meal over egg noodles, but here’s a few more tasty serving ideas! 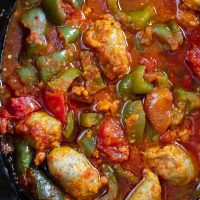 Other serving ideas:  Instead of egg noodles, serve over elbow pasta or white rice.   You could also serve on hoagie rolls for Sausage Subs!

Calories: 404kcal (20%)
Course:Main Course
Cuisine:American
Keyword:Slow Cooker Sausage and Green Peppers
Did you make this?I love seeing what you’ve made! Tag me on Instagram at @BrooklynFarmGirl and don’t forget to leave a comment & rating below.