Elevate your breakfast game with these Waffle Iron Hash Browns! This handy kitchen hack will show you how to take frozen hash browns and turn them into crispy, crunchy waffles. It’s the best breakfast ever!

Waffle irons are no longer JUST for waffles. They’re the perfect tool for making extra crispy Waffle Iron Hash Browns for breakfast! Grilling frozen hash browns in a waffle iron with shredded cheese and butter results in a crispy-on-the-outside, fluffy-on-the-inside side dish to pair with your eggs and bacon.

It’s no secret that I love homemade waffles and crispy diner hash browns, but when you combine the two, it’s magic! These hash brown waffles are lightly seasoned with just salt and pepper to keep things simple, but there’s plenty of room for additional seasonings and flavors. Yum!

The best part about making hash browns in a waffle maker is all you need are simple ingredients. No need to shred Russet potatoes or whip a fancy batter together. Keep everything easy with these 4 ingredients:

Quit babysitting your hash browns on the stove or waiting for them to roast in the oven. Quickly grilling them in a waffle iron is the better way! Here’s how it’s done:

Spray the waffle iron with cooking spray and preheat it while you prepare the hash browns.

Add the thawed hash browns to a strainer placed on top of a bowl. Squeeze the excess moisture out of the potatoes. This is the secret to crispy fried hash browns! Discard water and put hash browns into bowl.

Add the butter, salt, and pepper to the bowl and stir to combine.

Place ½ cup of the hash brown mixture onto each section (4) of the waffle iron.

Sprinkle some cheese on top of each section.

Then add more hash brown to cover the cheese.

Cook the hash brown waffles until the top is crispy and golden brown. Enjoy!

Play with the flavors!

Once you’ve mastered this no-nonsense recipe, you can play with the flavors by stirring in all kinds of flavor-boosters into the hash brown mixture. To make the experience even better, pile on plenty of toppings before serving!

Use any of these add-ins and topping ideas to make your waffle maker hash browns even better:

Making ahead and storing

To prepare the hash brown waffles ahead of time, be sure to place the frozen hash browns in the fridge overnight so they’re thawed by morning. The cooked and cooled waffles can be wrapped in plastic and stored in the fridge for 5 days or frozen for 3 months. Just reheat them in the toaster and enjoy! 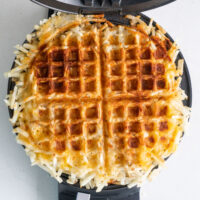 Course:Breakfast
Cuisine:American
Keyword:waffle iron hash browns
Did you make this?I love seeing what you’ve made! Tag me on Instagram at @BrooklynFarmGirl and don’t forget to leave a comment & rating below.