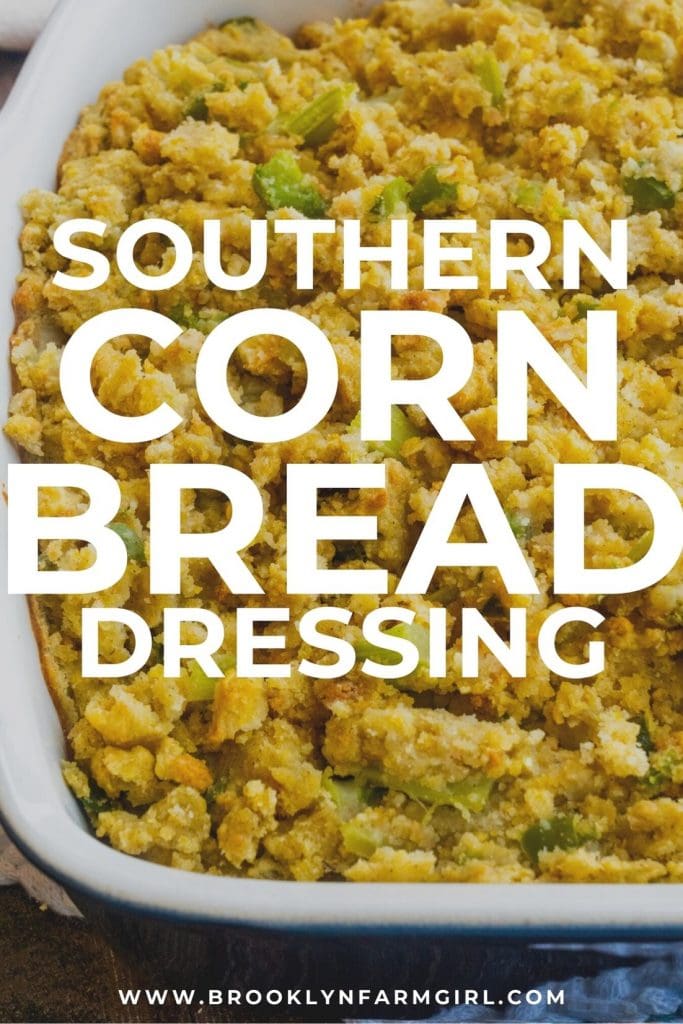 Southern Cornbread Dressing is so easy to make thanks to the packaged cornbread mix. Layered with crumbled cornbread, sauteed vegetables, chicken broth, and herbs, this classic Thanksgiving side dish is just as good as grandma’s recipe!

This Southern Cornbread Dressing replaces the usual toasted white bread you’d find in dressing with crumbled cornbread instead. A traditional southern Thanksgiving side dish, this buttery and savory recipe is layered with sauteed vegetables, warm chicken broth, and herbs. Every scoop is moist, soft, and so delicious.

To make this traditional cornbread stuffing recipe as easy as possible, I swapped homemade cornbread for a storebought mix (but if you want to make homemade, go for it). The dressing only takes 35 minutes to bake, giving you plenty of time to focus on the Thanksgiving turkey and other delicious holiday side dishes. Better yet, whip it up a day ahead of time so you can relax on the big day.

This dressing will be a hit for the holidays! Serve it next to more great sides, like Carrot Casserole and Amish Potato Stuffing.

Stuffing and dressing are both made with similar ingredients (bread, herbs, broth, and vegetables) and served as a holiday side dish, but have one major difference. The dish was coined with the title of “stuffing” because the mixture is traditionally stuffed and cooked inside of the turkey. Dressing, on the other hand, is cooked separately in a baking pan.

How to make cornbread dressing at home

Buttery and soft cornbread dressing is easy to whip up thanks to the storebought cornbread mix. The bread is crumbled together with herbs, veggies, and broth, then baked in just 30 minutes! It’s the perfect Southern holiday side dish:

Prepare the cornbread mix according to the package directions. Crumble the bread when it’s ready, then set it aside.

Saute the celery, onion, and peppers in a skillet over medium high heat. Cook until they’re tender and have a slight crunch.

Add 4-5 cups of the cornbread mixture to a large bowl along with the sauteed veggies, eggs, broth, and seasonings. Mix well to fully combine. Pro tip: Heat up the chicken broth so the sage is easier to incorporate.

Bake the cornbread dressing in a baking dish until it’s lightly golden brown and crisp on top. Let it rest for 10 minutes out of the oven, then serve!

No time on Thanksgiving day? No problem! You can bake this dressing recipe the night before, refrigerate it, and then pop it in a 350ºF oven for 20 minutes before serving.

Can you stuff cornbread dressing into the turkey?

I wouldn’t recommend it. Cornbread stuffing needs a lot less time in the oven compared to a Thanksgiving turkey. If you were to stuff the turkey with the dressing, it would likely turn out overcooked and mushy.

Which dry cornbread mix should you use to make cornbread dressing?

This depends if you prefer your cornbread to taste more savory or sweet. For sweet cornbread dressing, use a mix that contains sugar, like Jiffy Cornbread Mix. Otherwise, try to use a mix without any added sugar.

Can it be made gluten free?

How long does it last?

Store the leftover dressing in an airtight container and keep it in the fridge for 1 to 2 days. It makes great leftovers!

Can you freeze cornbread dressing?

You can! Once it’s baked and cooled, wrap the baking dish with the dressing really well in plastic wrap and freeze for up to 2 weeks. Let it thaw in the fridge overnight and warm it up in the oven the next day. 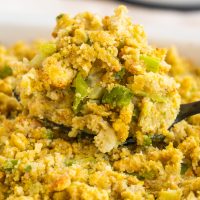 This recipe requires 4 cups of crumbled baked cornbread, which equals about a 16 ounce package.  Anywhere between 4-5 cups of cornbread works for this dressing.   Jiffy cornbread comes in 8 ounce boxes, so you will need 2 of them.  Bob’s Red Mill has a 20 ounce package that I like to use with a little leftover.      Prepare cornbread as instructed on the box, bake and then once cooled down, crumble up and continue with the recipe.
Course:Side Dish
Cuisine:American
Keyword:cornbread dressing
Did you make this?I love seeing what you’ve made! Tag me on Instagram at @BrooklynFarmGirl and don’t forget to leave a comment & rating below.