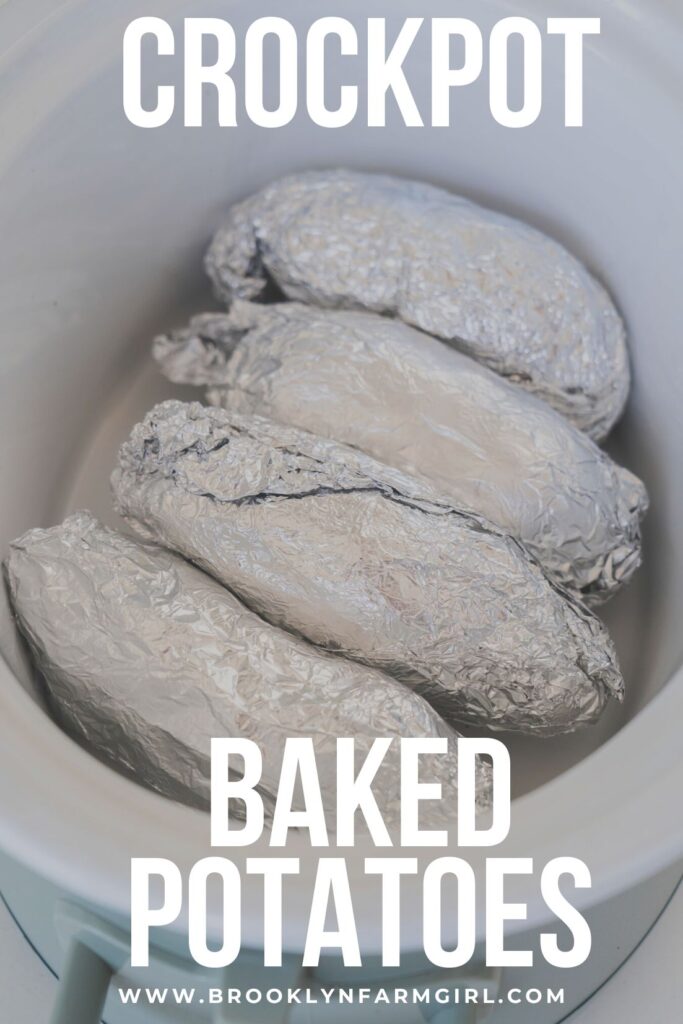 Easy to make baked potatoes made in the crockpot.  Wrap them in aluminum foil and cook for 5 hours for soft potatoes with crispy skins! These make the best baked potatoes!

These baked potatoes are so easy to make, especially on days when you don’t want to heat up your kitchen by baking them in the oven. All you need to do is cook them in the slow cooker for a few hours until they’re soft. The result is tender baked potatoes that still have crispy skins!

Once they’re done, add your favorite toppings – for me, I like simple butter and salt, but my husband and kids love sour cream on theirs too! I hope you enjoy these incredibly easy to make crockpot baked potatoes!

How long do potatoes take in the slow cooker?

Baked potatoes take between 4-7 hours depending if you are cooking them on HIGH or LOW heat in the slow cooker.

If the potatoes are much smaller than traditional baking potatoes, check them at the 3.5 hour mark.

How to Make Baked Potatoes in the Crockpot

Scrub potatoes to clean them. Poke holes in them with either a fork or knife.

Place each potato on a piece of aluminum foil, a size that is large enough for you to be able to wrap the potatoes up completely.

Brush each potato with olive oil and sprinkle with salt.

Wrap the potatoes up tight in the foil and place in slow cooker.

Cook until potatoes are softened. Serve with your favorite toppings and enjoy!

What should I put on top of a baked potato?

Do I need to wrap potatoes in aluminum foil?

Although I think the best baked potatoes are wrapped in aluminum foil, this recipe can easily be made without foil. Spray the bottom and sides of slow cooker bowl with nonstick spray and then continue brushing them with olive oil and salt, and then placing directly in the slow cooker. Since they might cook faster, check them at the 3.5-4 hour mark (on HIGH) and then continue to test until they’re soft.

Can I cook sweet potatoes the same way? 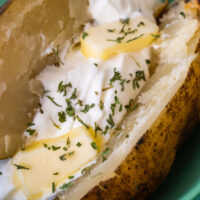 Course:Side Dish
Cuisine:American
Keyword:crockpot baked potato
Did you make this?I love seeing what you’ve made! Tag me on Instagram at @BrooklynFarmGirl and don’t forget to leave a comment & rating below.