Look at all the vegetables we picked in our NYC garden in August. Come join me to learn how to grow your own food! It’s easy, anyone can do it!

It’s the end of August which means we’re spending a lot of time in the garden picking vegetables.   Tomatoes, peppers, kale, carrots, onions, beans, eggplant and so much more is being picked!  This is the time of the year where tomatoes can turn quickly, so we need to keep on top of the vegetables with a couple picking sessions a week. 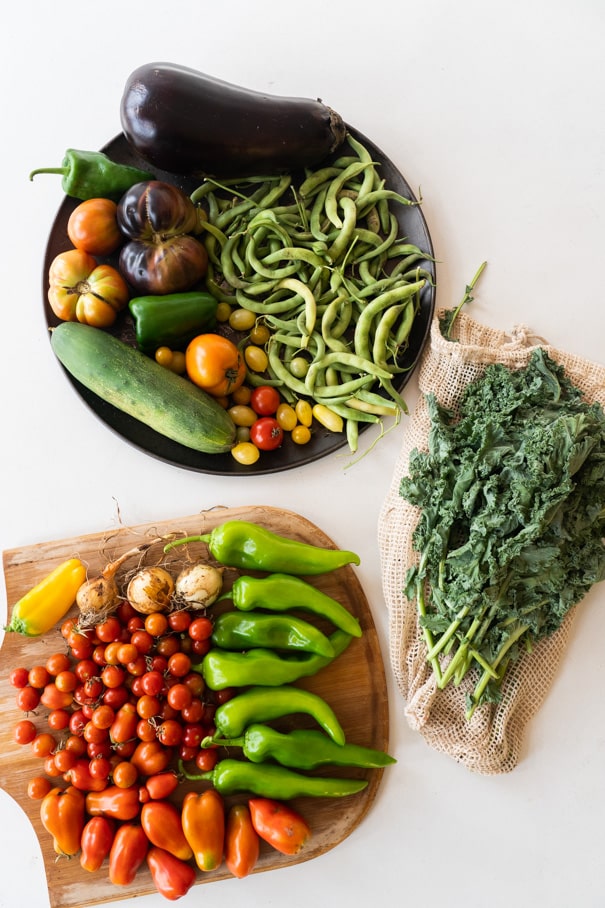 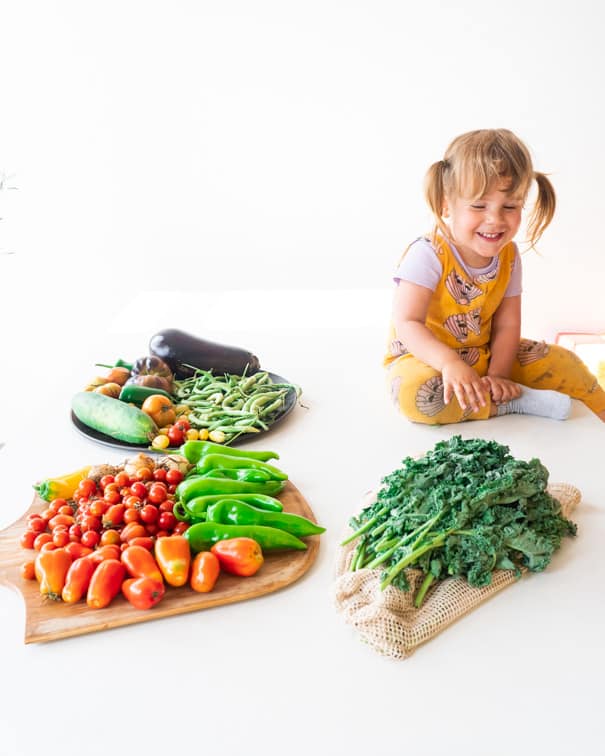 Vegetables to Pick in August

This year we grew 2 types of tomatoes, instead of our usual 3. We forego the beef tomatoes to make more room for our favorite tomatoes: cherry and roma/paste.     The goal is to always make enough tomato sauce to last us until next Summer, so we’ve been busy in the kitchen making Cherry Tomato Sauce (it’s my favorite sauce). 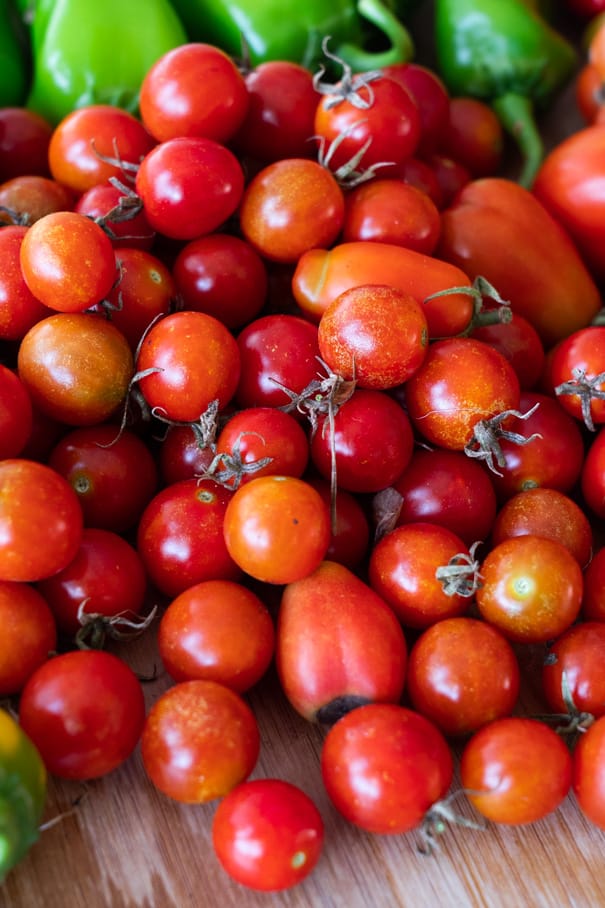 We decided we were going to grow San Marzano tomatoes for the first time this year.   We had a bit of a blossom end rot issue in the beginning but besides a couple, they found their groove and are now growing beautifully. 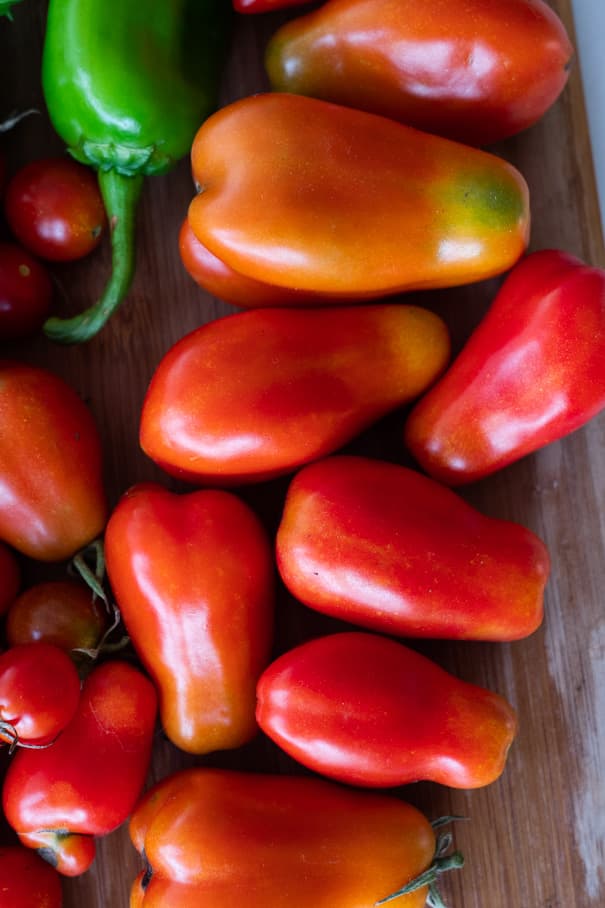 If you’re looking for a new tomato to grow to make sauce with next season, try San Marzano! I think you’ll love them! 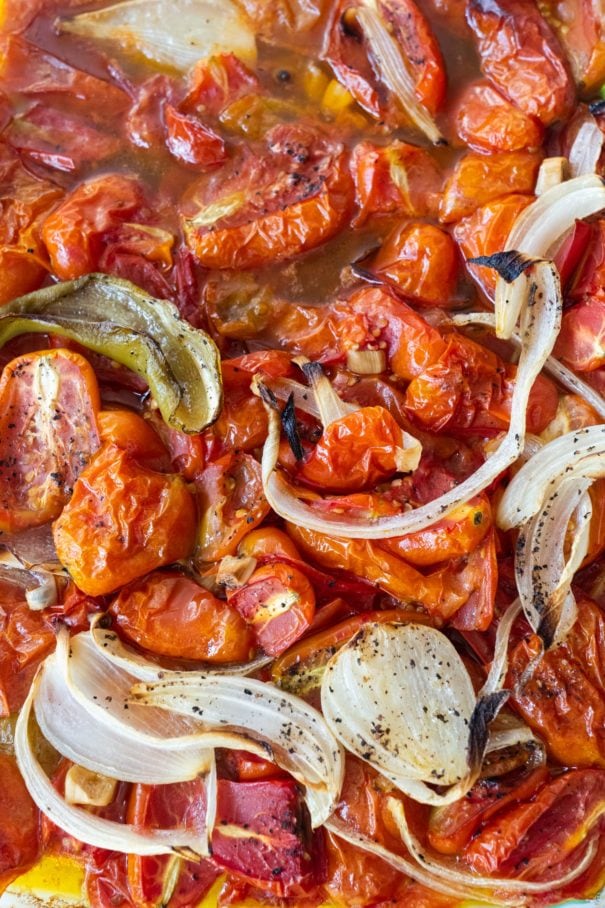 On the pepper front, we’re picking Anaheim, Sandwich Box and Green Bell Peppers. You can watch me pick peppers here!

We had a pretty good bell pepper season this Summer.   Some years our bell peppers don’t grow that big, but thankfully this was a good Summer for them.  I’ve been using them up in lots of recipes (like Slow Cooker Chicken Thighs). 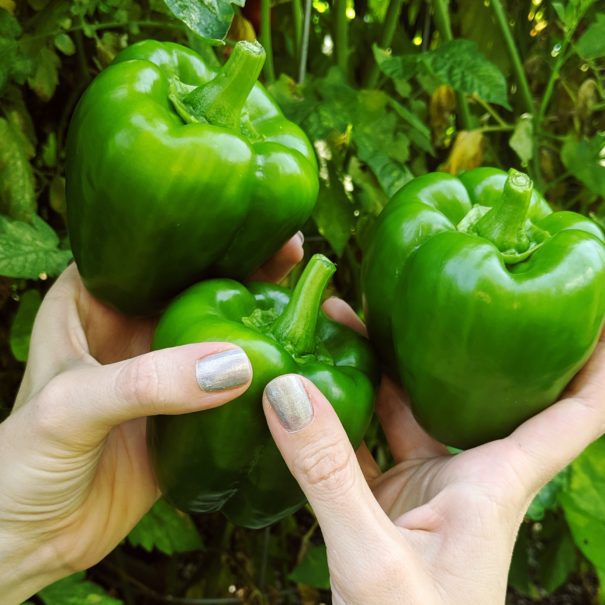 We’re also picking tons of Anaheim peppers.  They always grow great for us!  Like tomato sauce, I make a big batch of diced chiles to freeze for Winter.

Another first, this Summer we grew Sandwich box peppers for the first time.  You might know them as mini sweet peppers like they’re often called in the grocery store.   I love mini sweet peppers and snack on them like a crazy woman.  Now I have Enceladus hooked on them too (she thinks they taste like “candy!”) so I think next year we might need to grow double the amount!

Here’s some carrots we pulled out a few weeks ago.  I have a Carrot Casserole recipe that I can’t wait to share with you!  Usually I chop these up for Slow Cooker meals or roast them in the oven.  I always use the full plant, using the carrot greens to make homemade vegetable broth! 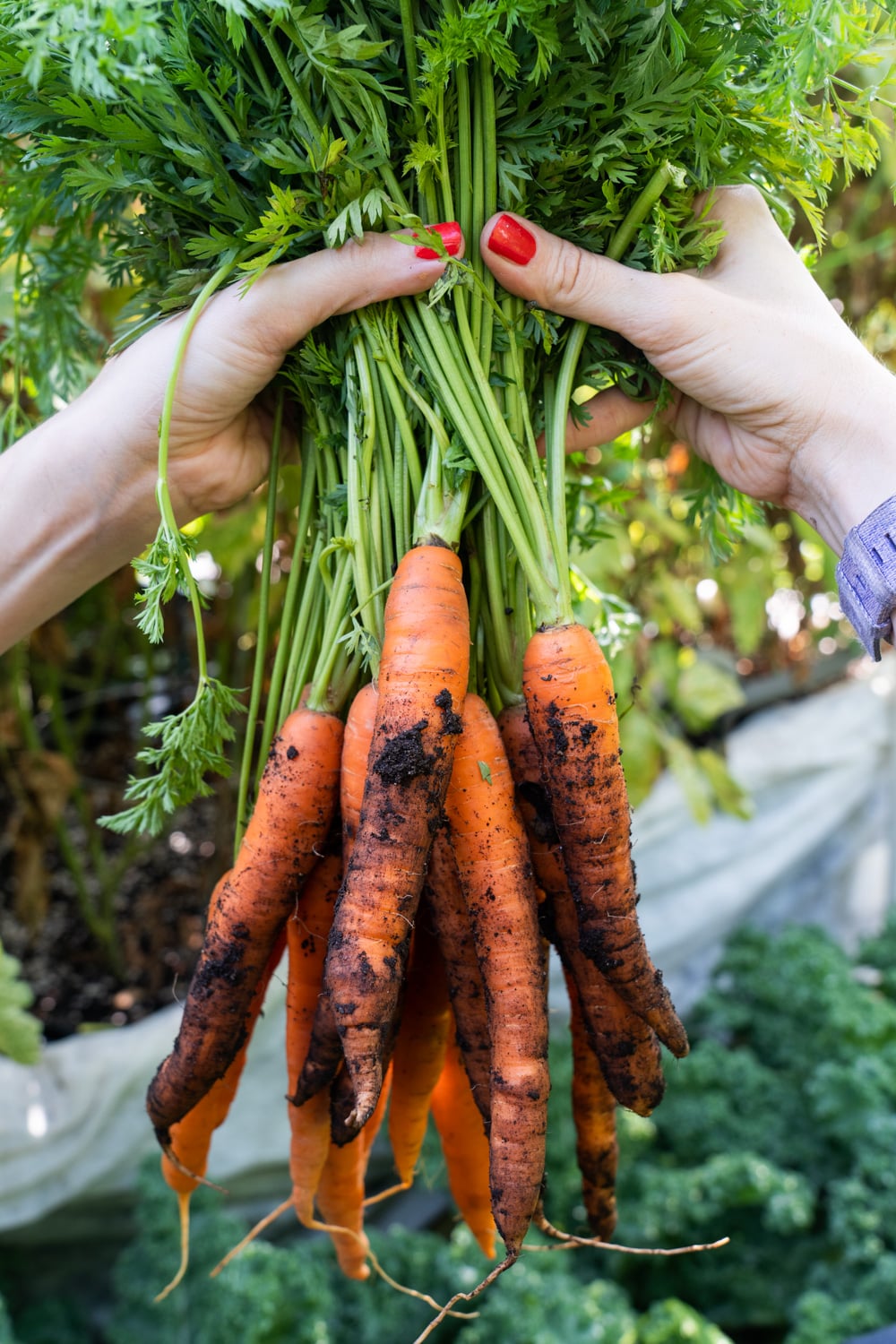 Even though some of the carrots great grew, some of them were stunted because they didn’t get enough light.  We have very limited space in our Brooklyn garden, so they were stuck between some tall kale and our pea fence.   Next year we’ll have to organize better.

We did just plant a couple hundred carrot seeds this past weekend for a hopeful second harvest.  Here’s to hoping they grow before first frost!

Now let’s head over and see what we’re picking in the Community Ag Bed.  The Community bed is taken care of by a few different families.   Everyone grows a different vegetable, and then we share the harvest.  It’s kinda like a small CSA.     This is great because besides our small 8×8 plot where we grow our usual vegetables (the one I shared above), this gives us a A LOT more room to grow things.

For example, we’re about to dig up close to 50 potato plants that we grew. We could not grow that in our small plot!    So being part of this Community bed helps us grow more vegetables,  work with our neighbors and try some vegetables we might not have grown.

As you can see, it’s a mix match of a bunch of different vegetables that we got from the Community bed this week! 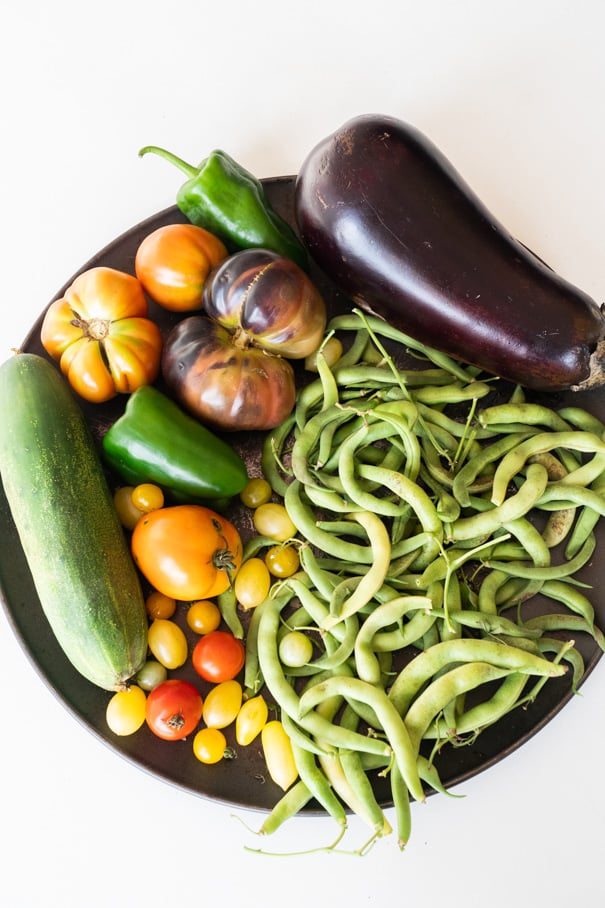 Eggplant isn’t a vegetable we usually grow.  To be honest, we’re not huge eggplant fans, but goodness gracious, I made some delicious Eggplant Nuggets over the weekend and they were so good we might need to start growing them!  Anyone want the recipe?  Let me know in the comments! 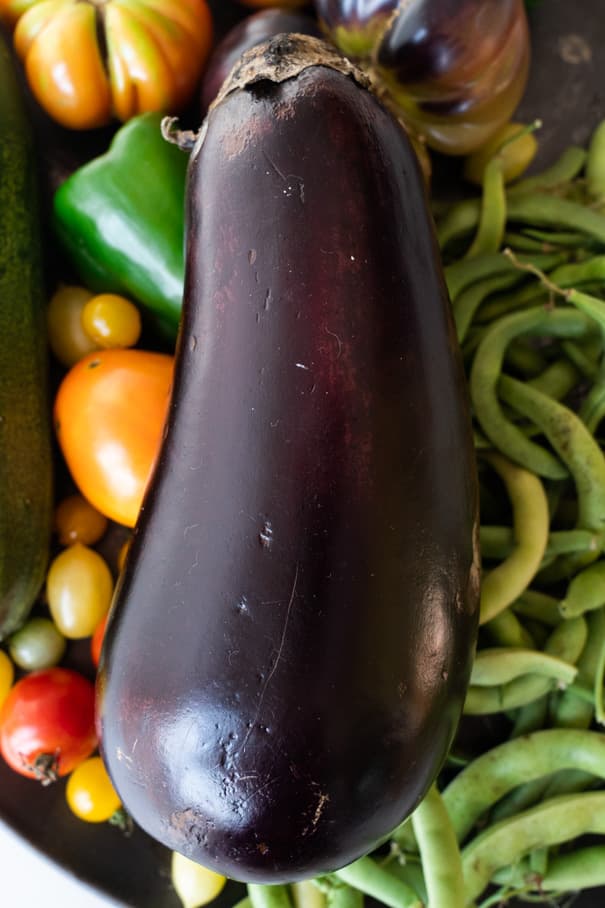 We also got a nice sized bag of green beans, fresh off the plant.   We’re going to sauté these up with a little butter and salt.  Yum! 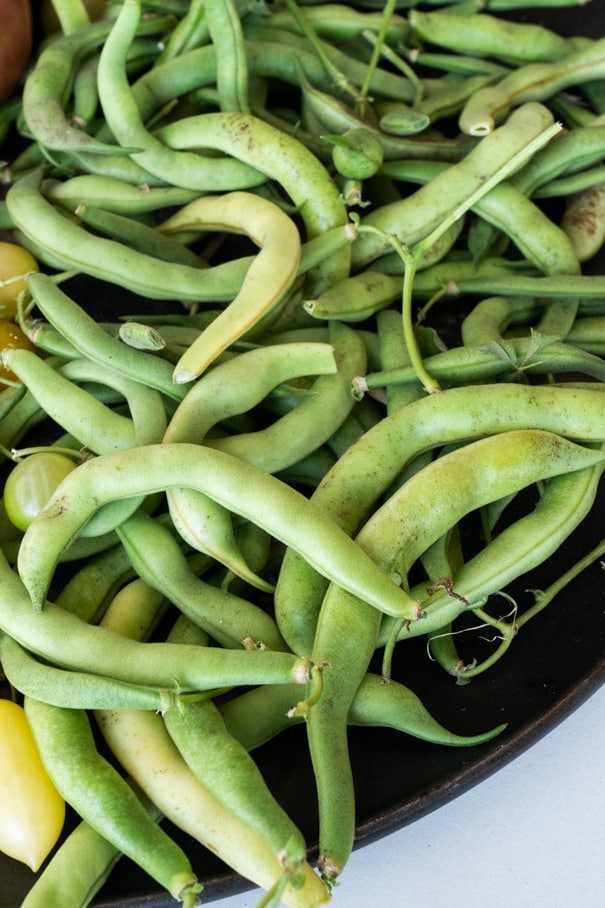 And more tomatoes! Because honestly, there’s no such thing as too many tomatoes!     Even though we grow lots of tomatoes, I can never say no to extra tomatoes. Tomatoes = tomato sauce!  We ALWAYS need tomato sauce.  So to recap, I’m a girl who will never turn down free tomatoes!

And that’s what we’re picking in the garden right now!

What’s in the near future?  Soon we’ll be digging up potatoes, picking pole beans and planting Brussels Sprouts.  Stay tuned for September!

Let me know in the comments what you’re picking in your August garden!