These incredible pumpkin whoopie pies are made with two soft and fluffy pumpkin cake-like cookies and a layer of marshmallow filling sandwiched in between. It’s a fun and perfect little treat you can eat right out of your hands.

Whoopie Pies are easier to make than you might think. They might even be my very favorite pumpkin dessert and pumpkin whoopie pies don’t last very long in my house. Everyone loves them and they’re the perfect handheld treat!

What Is A Whoopie Pie?

A whoopie pie is usually 2 pieces of cake, squashed together with a creamy filling in the middle. The cake can be chocolate, vanilla, gingerbread or in this case pumpkin.

Where Is The Whoopie Pie From?

Whoopie pies are considered a New England phenomenon and a Pennsylvania Amish tradition. They have also been known as a “gobs” in Western Pennsylvania. These taste just like the whoopie pies you buy in Amish markets in Lancaster County!

Have you been to an Amish market? Growing up near Amish Country, I’ve been to quite a few. If there’s anything you should take from an Amish Market it’s this: The Amish know how to bake. Bread, cookies, cinnamon rolls, pies, chocolate candies… and pumpkin whoopie pies. (PS.  Check out my Amish Stuffing!)

How To Make Pumpkin Whoopie Pies:

While walking around Marshall’s a few days ago, I spotted a Whoopie Pie pan on the sale rack. This baby was $5.

I believe I earned it as I had to stand in line for 30 minutes for it. I knew Whoopie Pies were in my future, but I wasn’t expecting to come across a pan. Actually, I didn’t even know they made Whoopie Pie pans. The pan works great as it creates the perfect pie shapes.

I love it! What a great $5 investment! Don’t you just love it when you bag a great bargain and get to use it almost immediately?

The whoopie pie cakes are easy to make. Start by mixing the oil and brown sugar. Add in the pumpkin purée and eggs. Mix to incorporate them well.

Next add in flour, salt, baking powder, baking soda, vanilla, cinnamon, ginger, and the cloves. I like to sift my dry ingredients in all cake recipes. This gives the cake a soft, and airy feel.

Now that you have the batter, using a spoon, transfer it onto the Whoopie Pie pan. If you don’t have a pan, you can always use a baking sheet. If you’re using a baking sheet, try to ensure that your batter forms a good circular shape. The better the shape of your batter, the better looking your pies will come out.

What Is Whoopie Pie Filling Made From?

A traditional whoopie filling is a marshmallow filling, like this one, but different kinds of buttercream and frosting recipes are widely used too.

How To Make Whoopie Pie Filling:

While your whoopie pie cakes are cooling, it’s time to move to the whoopie pie filling recipe.

This whoopie pie filling recipe calls for one egg white. There are quite a few ways to get this done. But my technique is to crack a little hole in the egg, so the yolk stays inside while the white comes out.

Whisk in the rest of the ingredients to get a fluffy batter. You might have to do this for a good 10 minutes.

We needed a creamy filling for this whoopie pie filling recipe. And boy, was this marshmallow filling delicious? I might have eaten 4 spoonfuls of it before even filling one pie.

As soon as you start to put a little bit of cream on top, the world gets a little better. You can also freeze this whoopie pie filling recipe for up to 2 months, for later use.

Transfer the filling onto your cakes. Squash the filling with the second cake. The world becomes just perfect.

Is it just me or does anyone else see a bunch of smiling mouths when they look at a bunch of Whoopie Pies?

Serve immediately. You can also wrap these pumpkin whoopie pies individually in plastic wrap for storing.

Do Whoopie Pies Need To Be Refrigerated?

You can bake the cakes a day before assembling the whoopie pies; store them unfilled at room temperature. Once the pies are assembled, refrigerate them in an airtight container. They’ll stay fresh for a couple of days.

Hope you enjoy this Amish Whoopie Pie Recipe as much as I do!

Other Pumpkin Desserts You’re Sure To Love:

If you’ve been following my recipes, you know that I love all-things pumpkin. And once fall comes, you’ve got to have pumpkin desserts on the menu!

Sadly, I had to use my last batch of frozen pumpkin puree. Don’t worry though I have a few more pumpkins to cut open and get purée out of! More Pumpkin desserts to look forward to? Possibly, yes! 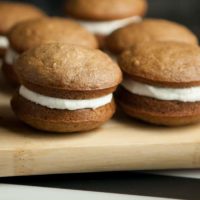 Print
These incredible pumpkin whoopie pies are made with two soft and fluffy pumpkin cake-like cookies and a layer of marshmallow filling sandwiched in between. It’s a fun and perfect little treat you can eat right out of your hands.
Prep Time: 10 minutes
Cook Time: 12 minutes
Total Time 22 minutes
serves 12

For the cream filling

You can bake the cakes a day before assembling the whoopie pies; store them unfilled at room temperature. Once the pies are assembled, refrigerate them in an airtight container. They’ll stay fresh for a couple of days.

Calories: 325kcal (16%)
Course:Dessert
Cuisine:American
Keyword:pumpkin whoopie pies
Did you make this?I love seeing what you’ve made! Tag me on Instagram at @BrooklynFarmGirl and don’t forget to leave a comment & rating below.