Vanilla Whoopie Pie Recipe With Marshmallow Cream Filling. These whoopie pies taste like cake with creamy marshmallow filling inside. These taste just like the whoopie pies you buy at the Amish market!

Whoopie pies were a big thing growing up.  We would head to the auction market every Sunday.  Sometimes it would be one nearby, sometimes we’d head to the Amish Market in Lancaster.  It didn’t matter where we went because whoopie pies would always end up in our basket. Now with a whoopie pie craving happening but no whoopie pie seen at my local grocer I headed to the kitchen to make a classic Vanilla Whoopie Pie Recipe! 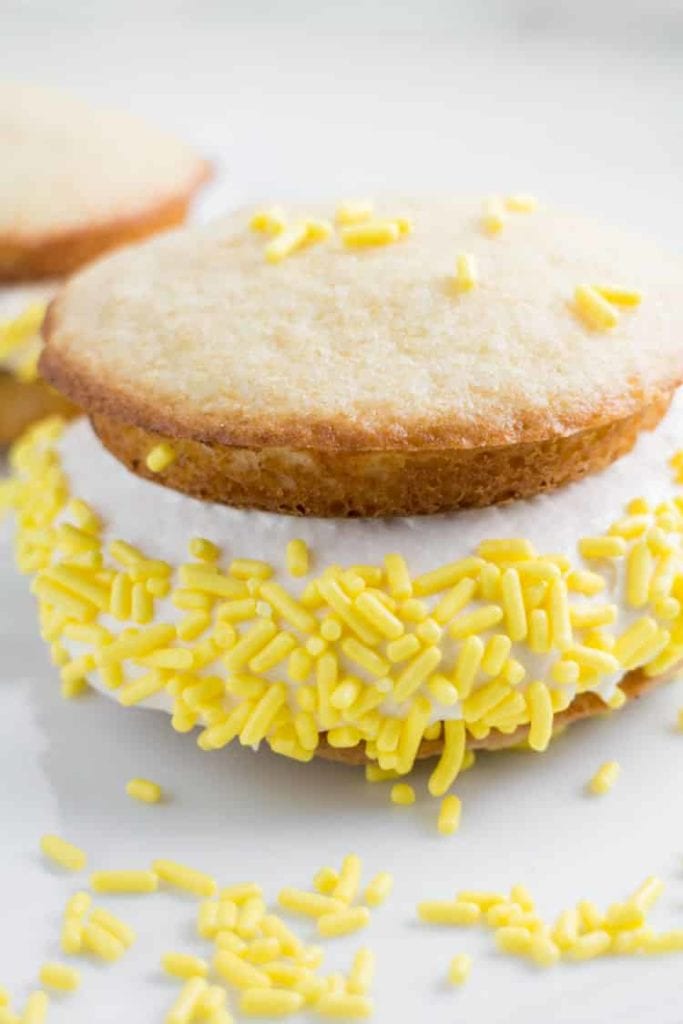 I’ve made chocolate whoopie pies and pumpkin whoopie pies in the past but I never made vanilla ones.  Vanilla cake is one of my favorite treats so these pies have a cake like texture as they are very soft.  And the filling. AND THE FILLING.  The filling is incredible. 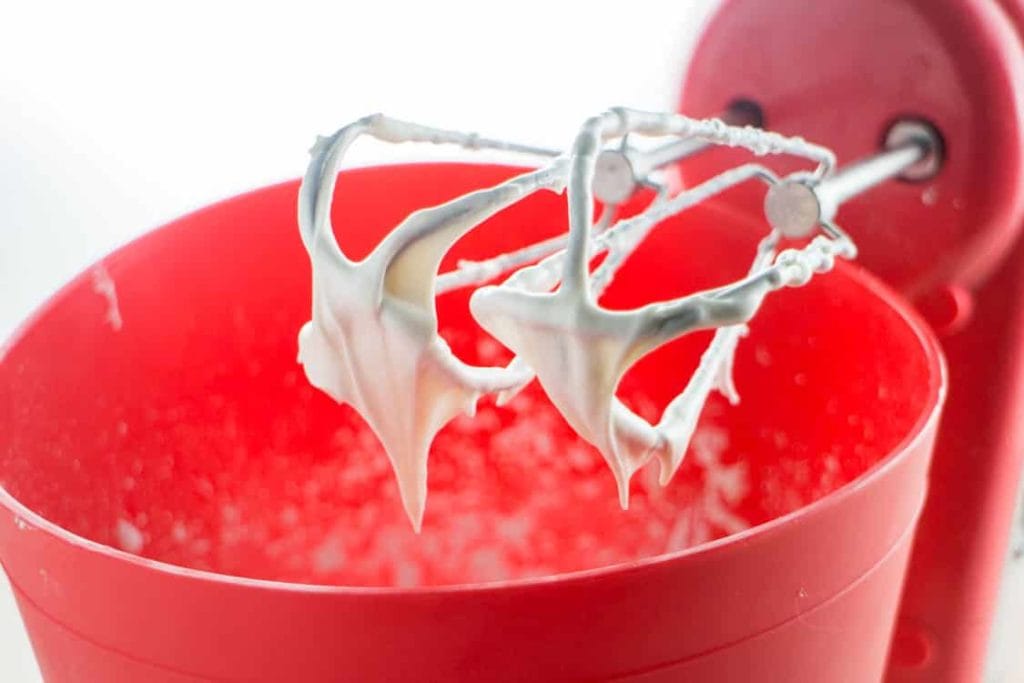 Marshmallow was always the filling for homemade whoopie pies at the market so I went classic with this recipe and kept the marshmallow cream that made me fall in love with them 25 years ago.    Because of the marshmallow, the filling is light and fluffy, perfect to go with the soft pies.

I used a whoopie pie pan for this recipe but you can alternatively just add a heaping tablespoon of the batter onto a cookie sheet for each pie. 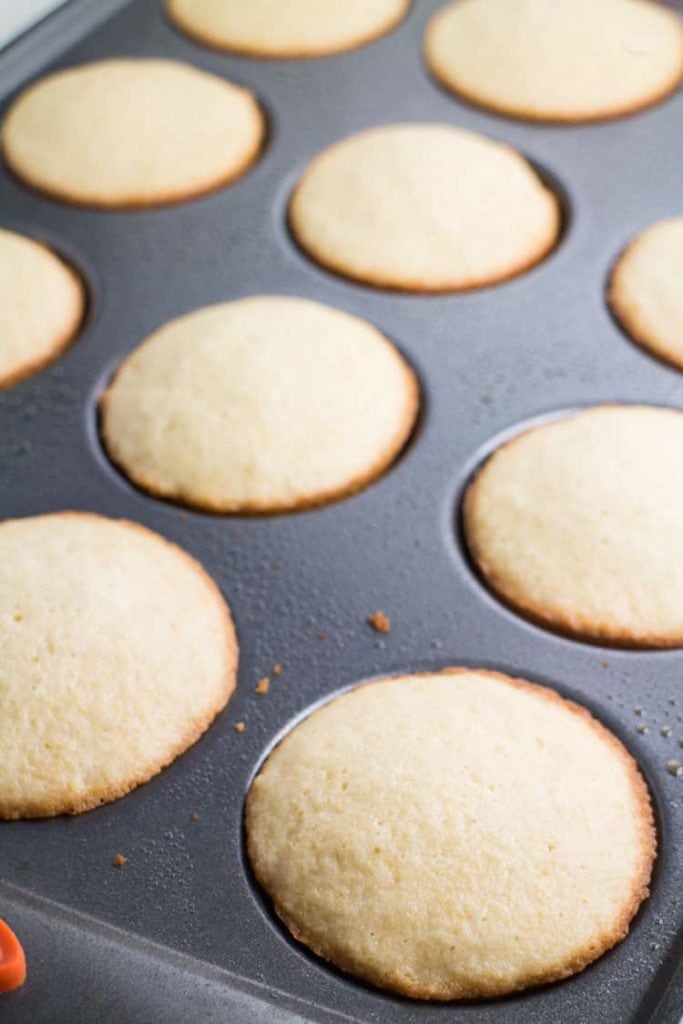 Back to that filling.  Grab a spoon and just eat it.  Noone is watching. I will be your kitchen lookout.  Quick, eat another spoonful!
Sorry, I’m obsessing over it but it’s really really good. 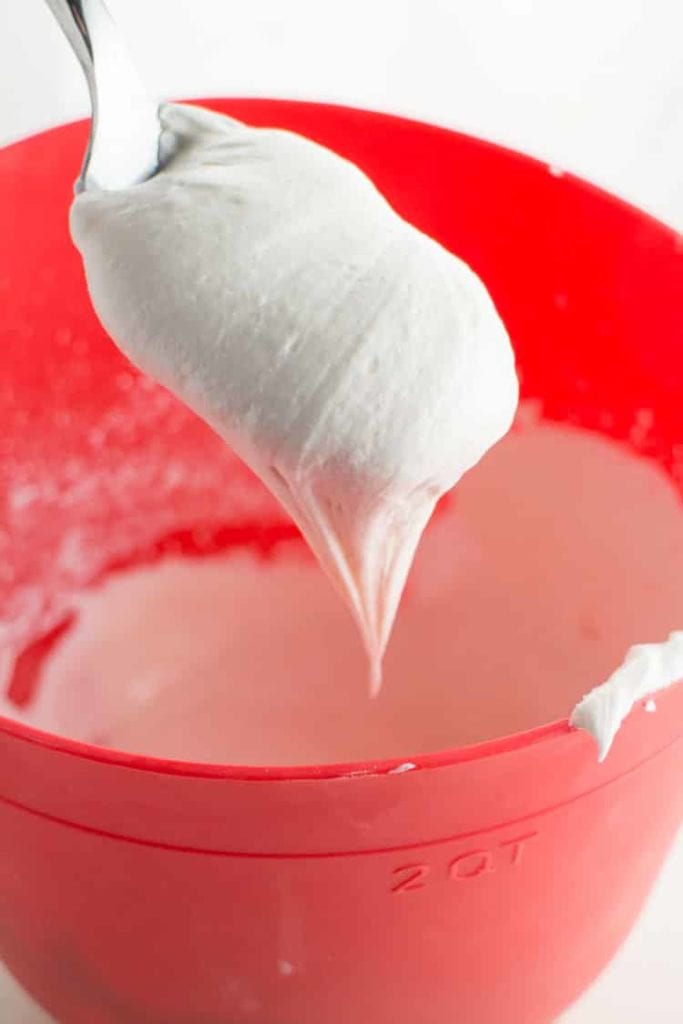 Now throw a nice spoonful of cream filling on one pie.  Grab another pie and gently push it down making a whoopie pie sandwich. It’s beautiful. 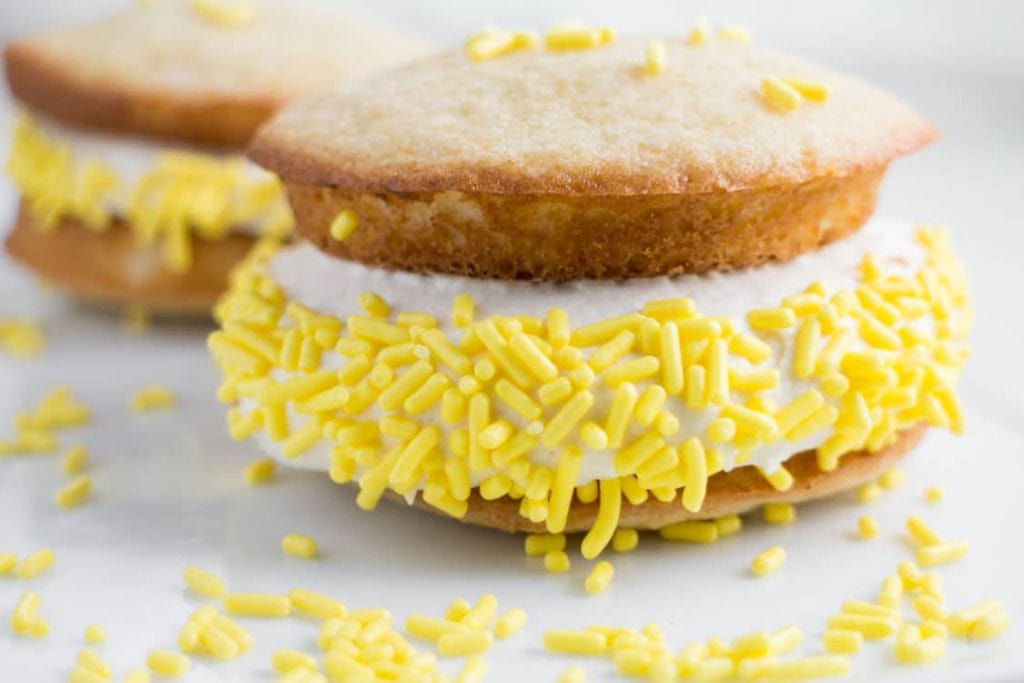 If you’re a whoopie pie lover, the sprinkles might be throwing you off because have you ever seen a whoopie pie with sprinkles? Probably not, but sprinkles add a colorful touch to a traditional favorite! 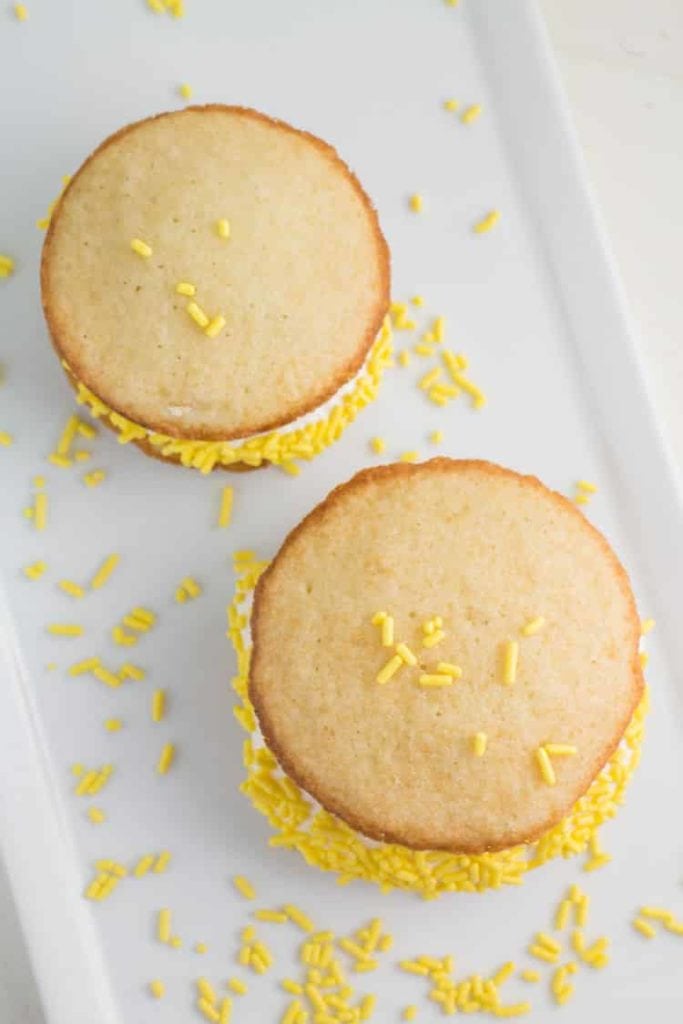 You can make these whoopie pies and add green and red sprinkles for Christmas, pastels for a birthday, or yellow for a Minions party! You can also have fun and add fun decorations on toothpicks to be inserted into each whoopie pie. 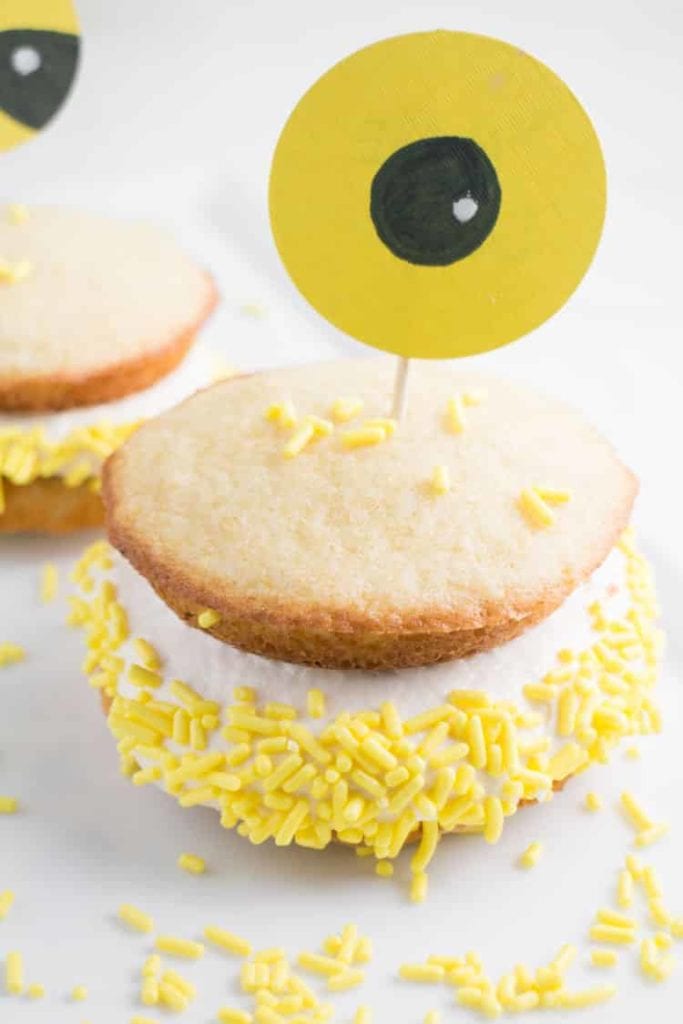 Enjoy this Vanilla Whoopie Pie Recipe and let me know in the comments if you love them as much as I do! 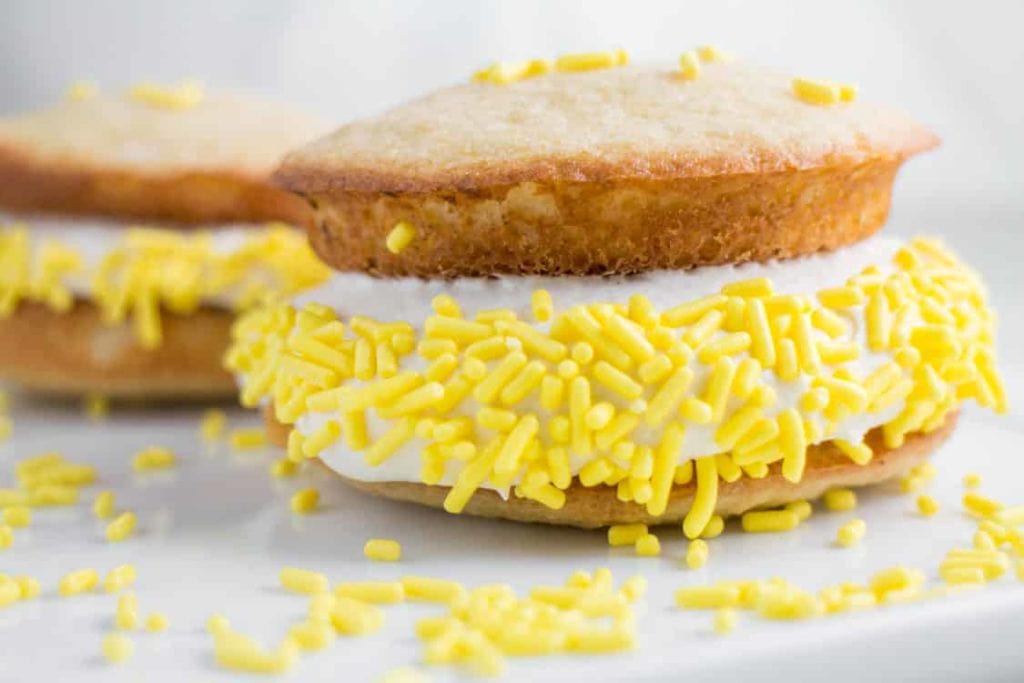 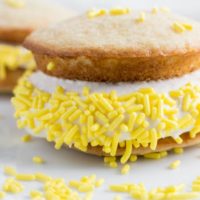 Print
Vanilla Whoopie Pie Recipe With Marshmallow Cream Filling. These whoopie pies taste like cake with creamy marshmallow filling inside. These taste just like the whoopie pies you buy at the Amish market!
serves 12

Makes 12 whoopie pies.
To make them more colorful and fun, add sprinkles!
Course:Dessert
Did you make this?I love seeing what you’ve made! Tag me on Instagram at @BrooklynFarmGirl and don’t forget to leave a comment & rating below.