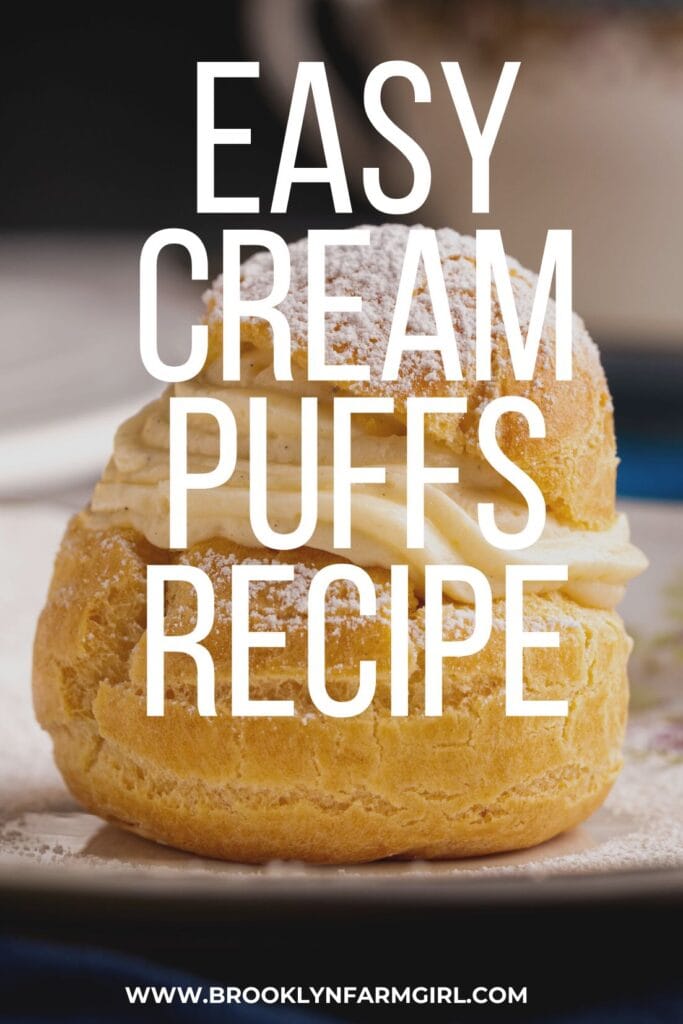 These Cream Puffs with Vanilla Pudding Filling are light, fluffy, and delectable! They are easy to make with instant pudding mix!

Cream puffs are a classic French dessert that is soft and will melt in your mouth. While a choux pastry recipe might sound complicated, this cream puff recipe is super easy to make and irresistibly delicious!

As the saying goes, “The proof is in the pudding”! I wanted to make a easy filling so I use a box of instant vanilla pudding to make cream puffs just like how I remember as a kid! Just one bite of this decadent puff pastry and you’ll be sold.

The best part about these cream puffs with vanilla pudding is that they are undeniably delicious and hard not to love! The cream puff filling, while simple, makes all the difference. The dual texture between a flaky baked pastry and soft vanilla pudding pastry cream makes for the perfect cream puff!

It only gets better since these homemade cream puffs are super easy to make. Given the delicious vanilla pudding filling is an instant package mix, all you have to do is stir it in with your wet ingredients and then cool in the fridge while you make your cream puff shells. Assembly is fun and easy too. Before you know it, you’ll have cream puffs that rival your local bakery! Don’t be shocked if people ask you to take some home and for the recipe too!

For the Vanilla Pudding Cream Filling:

For the pastry puffs:

How to Make Cream Puffs

First, you’re going to mix together the instant pudding mix, heavy cream, and milk in a large saucepan. Bring it to a light boil and stir until the mixture forms into pudding consistency.

Once at pudding consistency, take it off the burner and place into a bowl so it can set in the refrigerator.

In a saucepan, bring butter and water to a boil. Lower the heat and stir in the flour and salt until the dough forms into a ball. Take off heat and transfer dough into a large mixing bowl.

Beat in the eggs using a hand mixer.

Add dough in small mounds onto a cookie sheet that’s been lined with parchment paper.

Bake until the puffs are golden brown.

Once baked, let them cool down, and then slice each puff in half so you can begin to fill the bottom of each cream puff with vanilla pudding cream and place the other half on top, so it closes like a sandwich. You can use either a spoon or a piping bag to add the pudding mixture.

Serve warm, or put in the refrigerator to serve chilled later on! I like sprinkling some powdered sugar on top of each one! Enjoy these delicious cream puffs!

If you can’t get enough sweetness, some opt to place a drizzle of chocolate syrup over the top of the cream puffs for a fun design and even more flavor. For something more simpler simply dust the top of each one with powdered sugar!

Store in an air-tight container and in the refrigerator. If stored properly, your cream puffs with pudding filling will last up to two to three days. It had to be refrigerated since the pudding filling was made with dairy. It can be left safely at room temperature for up to 4 hours only.

Why are my cream puffs not fluffy?

If your cream puffs have too much moisture, they will collapse. This means your dough was not dry enough, or you didn’t bake them long enough.

How far ahead can I fill cream puffs?

You can make your cream puff for up to two days if stored properly. However, it will also mean that their shelf life is shorter, so they will only last up to a day after. If you’re taking them to an event, they will likely be eaten up in no time!

What is the difference between an éclair and a cream puff?

The most noticeable difference between an eclair and a puff is the shape (eclairs are oblong and puffs are round), but they are also filled differently. Puffs are often filled with whipped cream or pudding like this recipe, while eclairs are filled with a thicker custard. With that said, I love them both! 🙂 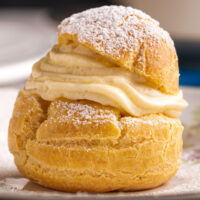 For the Vanilla Pudding Cream Filling

For the pastry puffs

Course:Dessert
Cuisine:American
Keyword:cream puffs
Did you make this?I love seeing what you’ve made! Tag me on Instagram at @BrooklynFarmGirl and don’t forget to leave a comment & rating below.