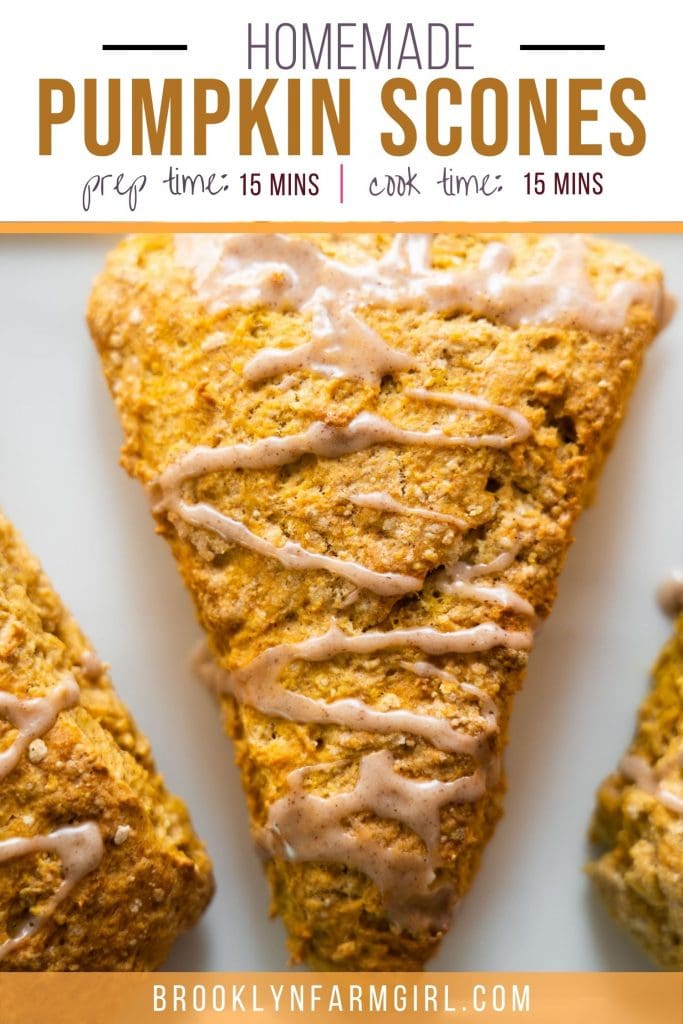 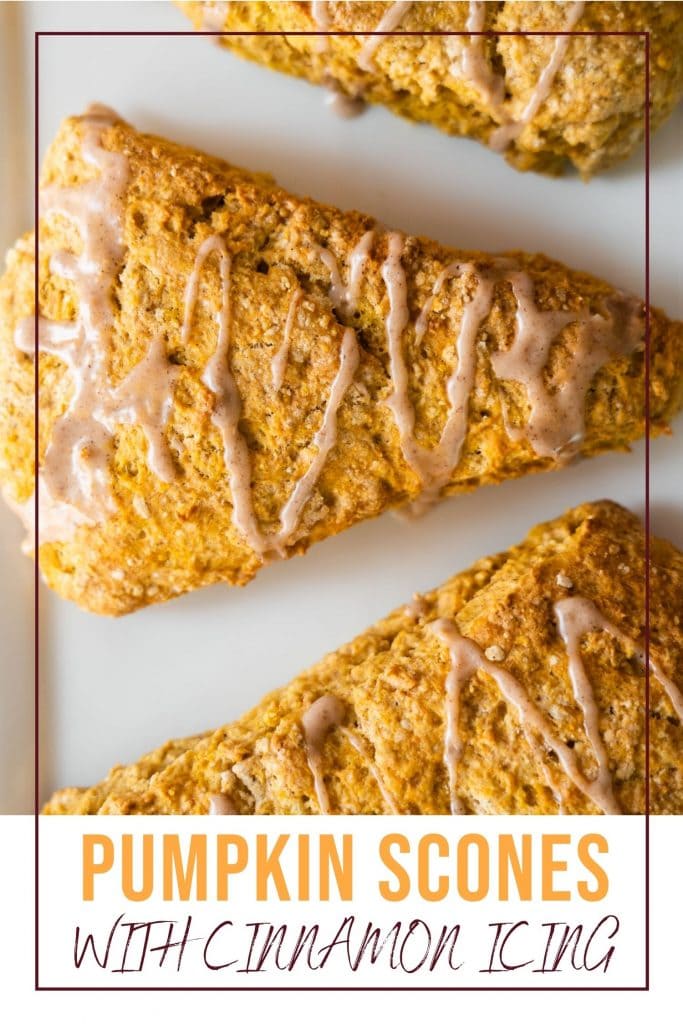 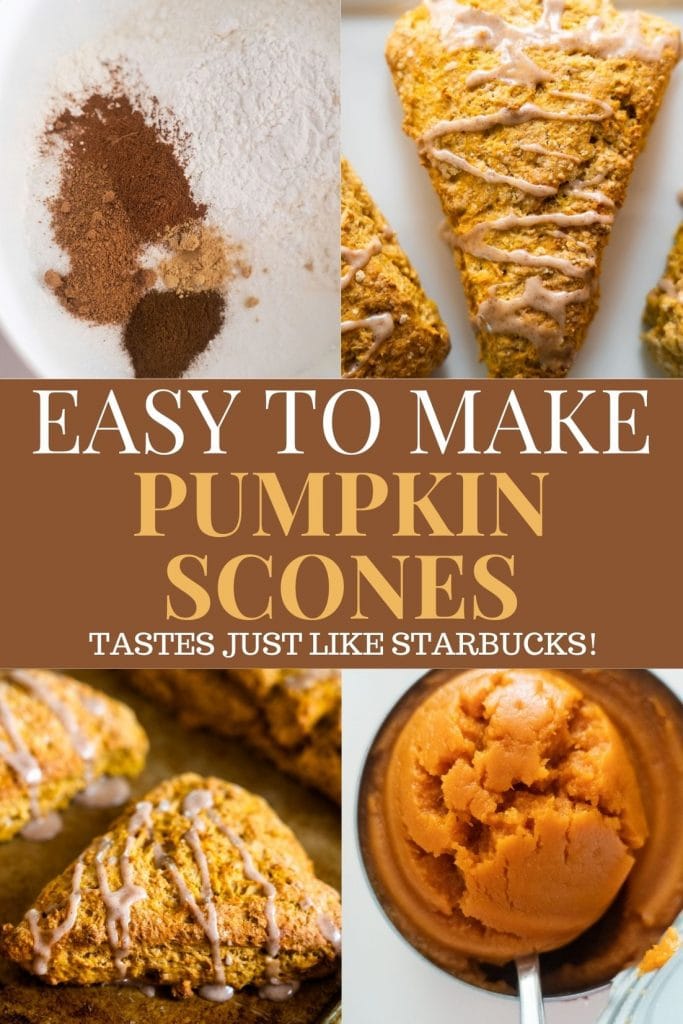 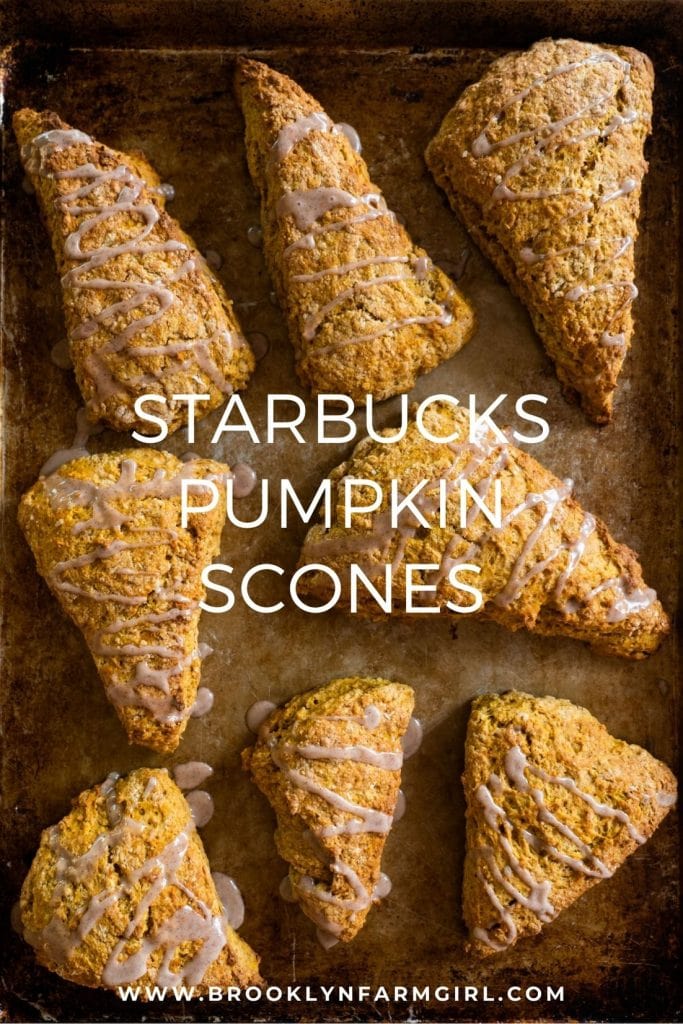 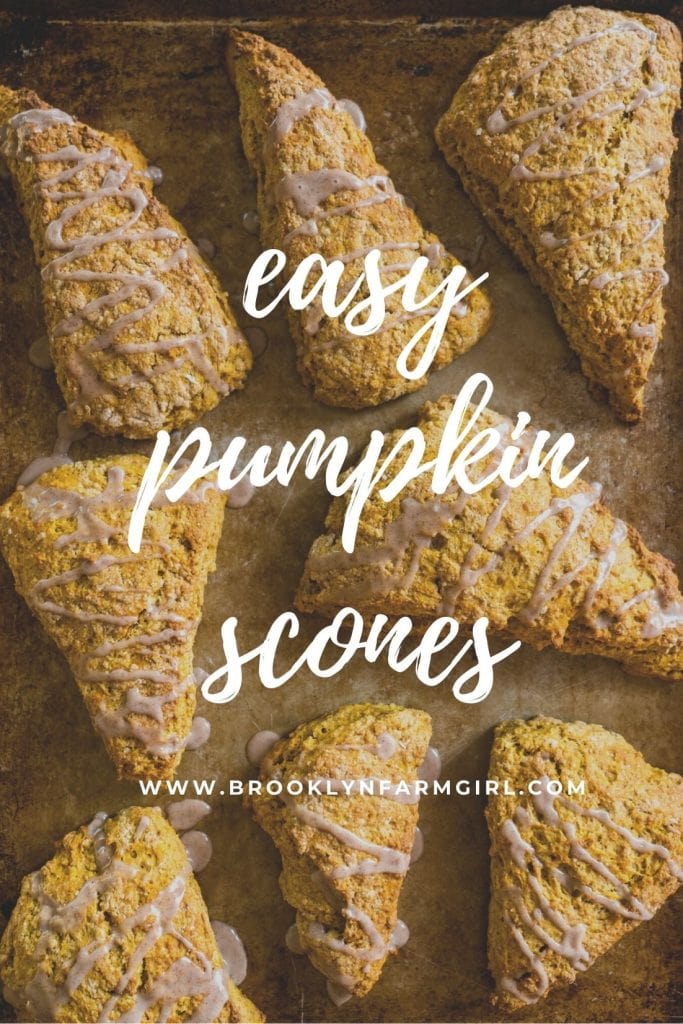 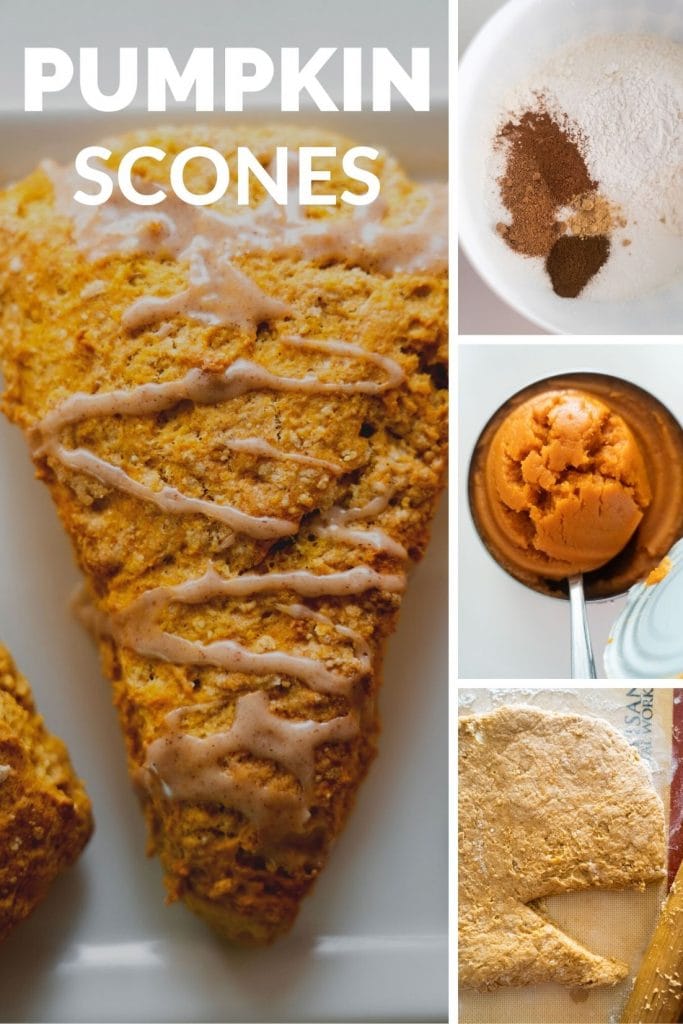 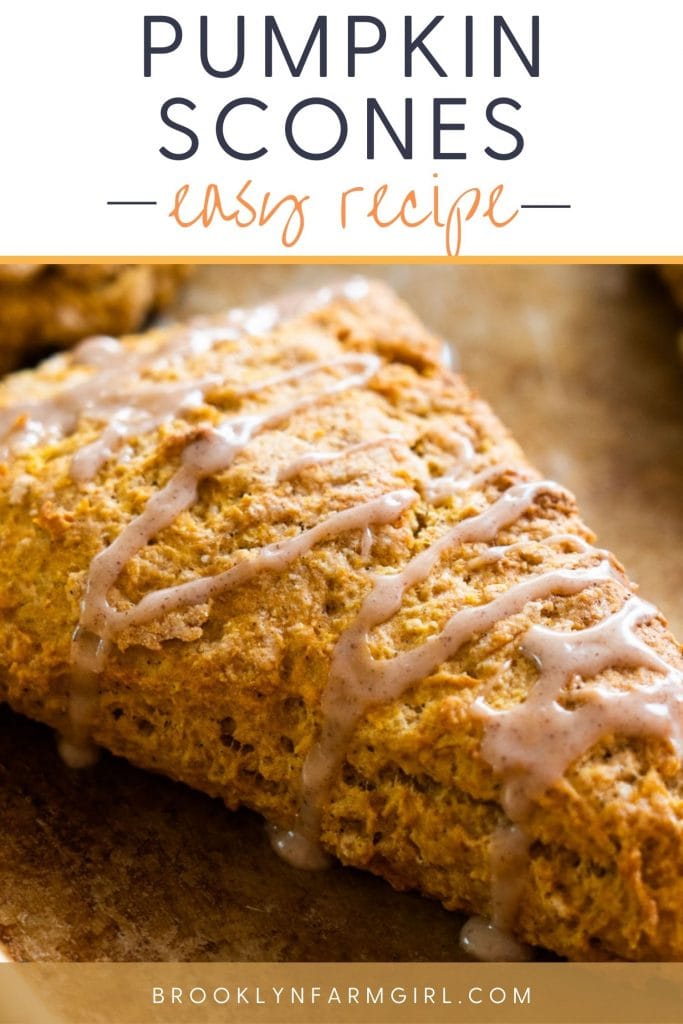 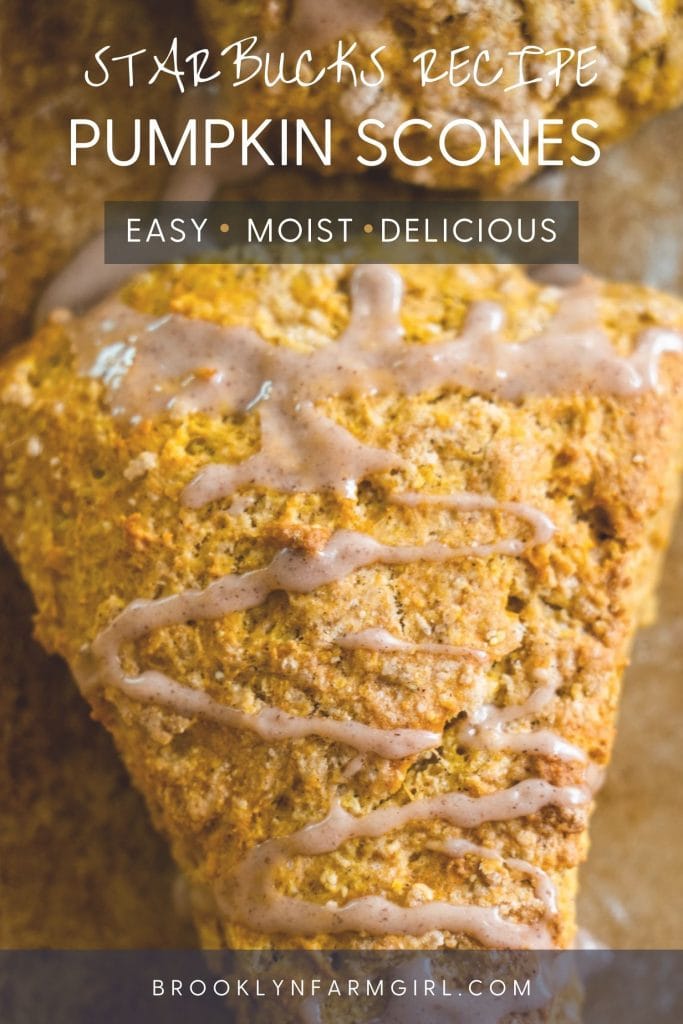 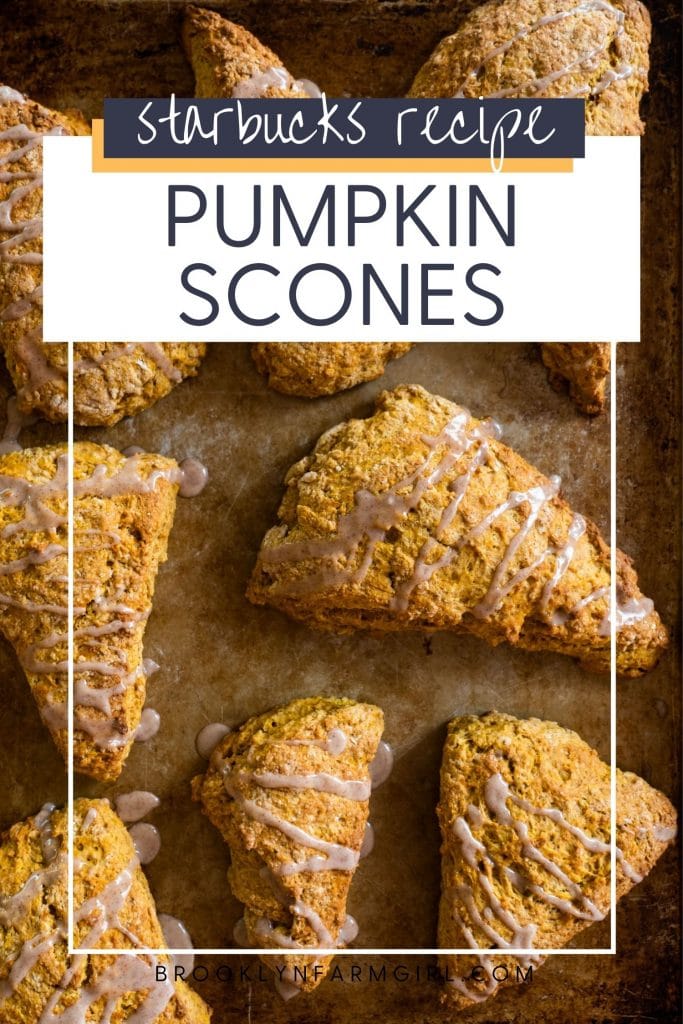 Homemade Pumpkin Scones with sweet vanilla cinnamon icing on top. This recipe makes moist, crumbly scones! These taste exactly like Starbucks, and they’re so easy to make at home!

Love Starbucks Pumpkin Scones but want to make your own at home? I got you covered. Once you make them in your own kitchen, you’ll never buy them at the coffee shop again!

These Pumpkin Scones are everything a scone should be. They’re crumbly, they’re moist, they aren’t too heavy, and they’re covered in a sweet cinnamon icing. They scream Fall! And they also scream eat me! These are such a big hit in my home where my entire family devours them!

Here’s a recipe video I made that shows you how easy they are to make! I hope this will help you when you make them!

What Ingredients Do You Need To Make Scones?

For the icing we’ll be making a basic cinnamon icing that you will need powdered sugar, milk, cinnamon and vanilla.

How to Make Pumpkin Scones

This recipe is 2 parts – the scones, and the icing. Both are easy and will have homemade scones ready to be eaten in 30 minutes.

Preheat oven to 425 degrees F. You’ll want to prepare a baking sheet by greasing it, or cover with a silicone baking mat (my preferred method).

Cut the butter. This recipe calls for chilled butter which is important to make the scones crumbly. I take butter directly out of the refrigerator and cut up on a cutting board into tiny pieces (I use a butter knife to do this). Add the crumbled up butter to the bowl and keep mixing, breaking up any large pieces of butter that you might see.

Wet Ingredients. Make a well in the middle of dry ingredients and add pumpkin (canned or homemade pumpkin puree), egg and milk. Use a spoon and mix it. This takes a little arm muscle work.

Tip: If you have a food processor you can mix all the ingredients together in there. First do the dry ingredients, then add the butter, and then the wet ingredients. You want a dough that isn’t too overly mixed that you can roll out, so don’t over process.

Roll Out. Sprinkle flour on a clean counter. Roll out dough until it reaches 1/2 inch thickness.

Cut into Scones. Using a knife, or pizza cutter, cut into 8 triangles, with the shapes resembling scones.

Bake for 12-14 minutes, or until lightly browned on bottom. Once done, remove from oven and allow to cool.

Using a spoon drizzle on top of the scones.

Chilled Butter. You don’t want to use softened or melted butter for these. By using chilled butter the scone is going to be crumbly, which is exactly the texture we want. I recommend using refrigerated or frozen butter. I cut my butter up with a butter knife on a cutting board, but you can also use a grater or food processor to chop it up more easily.

Don’t over stir your dough. Your dough needs to be rolled out and scones cut out, this is not a recipe that is poured into a pan, so our dough should be more on the firm side, not on the liquid side. For that I recommend using a spoon and some arm muscle to mix it and going without the electric hand mixer for this recipe.

What type of icing is best?

I prefer a cinnamon sugar icing for these which is a combination of powdered sugar, milk, cinnamon and vanilla. The cinnamon isn’t overwhelming at all and just gives it a little extra Fall tasting spice.

If you’re looking for a more traditional icing glaze, you can skip the cinnamon.

And if you want to skip the icing completely, that’s fine too! Add some butter on top, or even some homemade raspberry jam would taste delicious!

I hope you enjoy these Pumpkin Scones! 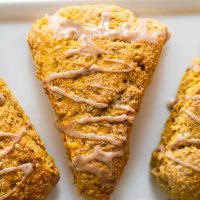 Print
Homemade Pumpkin Scones with sweet cinnamon icing on top. This recipe makes moist, crumbly scones! These taste exactly like Starbucks, and they're so easy to make at home!

For the Cinnamon Icing:

Tip: Want to make this super easy? You can mix all the scone ingredients up in a food processor instead of a bowl if you’d like!

Calories: 350kcal (18%)
Course:Dessert
Cuisine:American
Keyword:pumpkin scones
Did you make this?I love seeing what you’ve made! Tag me on Instagram at @BrooklynFarmGirl and don’t forget to leave a comment & rating below.