Blueberry Bread Stuffing! Traditional homemade vegetarian bread stuffing with sweet blueberries added in! This comes from a Grandma’s vintage cookbook, so you know it’s going to be the best! It’s easy to make and you can even make it ahead of time to freeze! 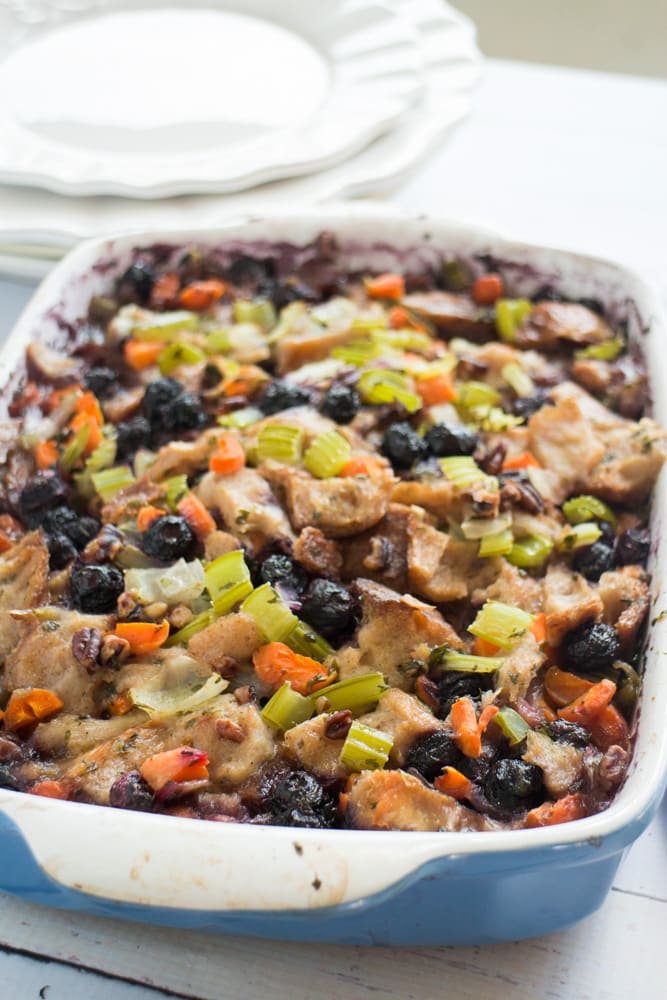 I’m back with another stuffing recipe! So many of you have loved my Amish Potato Stuffing recipe, so I decided to share with you another favorite, Blueberry Bread Stuffing! It obviously does not need to be Thanksgiving to make this stuffing, but it is the perfect Thanksgiving side dish!

This is the perfect side stuffing to accompany a main meat, like chicken or turkey. It’s also the perfect vegetarian side dish because it doesn’t involve any meat products or broths (it’s made with vegetable broth).

This is a vintage bread stuffing recipe that I have tweaked over the years to fit with our preferred tastes. It originally appeared in an old cookbook that my husband’s Grandmother gave me. The original recipe included a minced meat that even Google couldn’t explain to me, so I decided to change the meat ingredient to pecans.

Pecans in a stuffing recipe are wonderful because they add a delicious crunch! Everytime I serve this bread stuffing recipe, everyone wants to know what the crunch is because they love the small surprise. And just to note, it’s not an overwhelming crunch, it’s subtle as the recipe only calls for 1/2 cup of pecans. 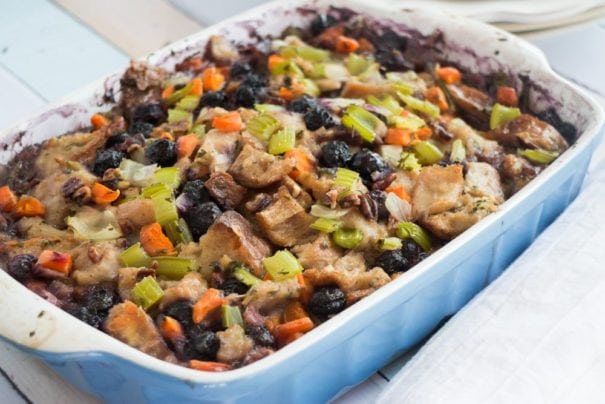 This recipe calls for 6 cups of stale bread. You can use any type of bread you want, including just regular bagged bread, but I love using a cheap baguette that I get at the grocery store. To make it stale, just keep it out on the counter for a few days. If you don’t have enough time to make bread stale, here’s my trick I use (all the time!). 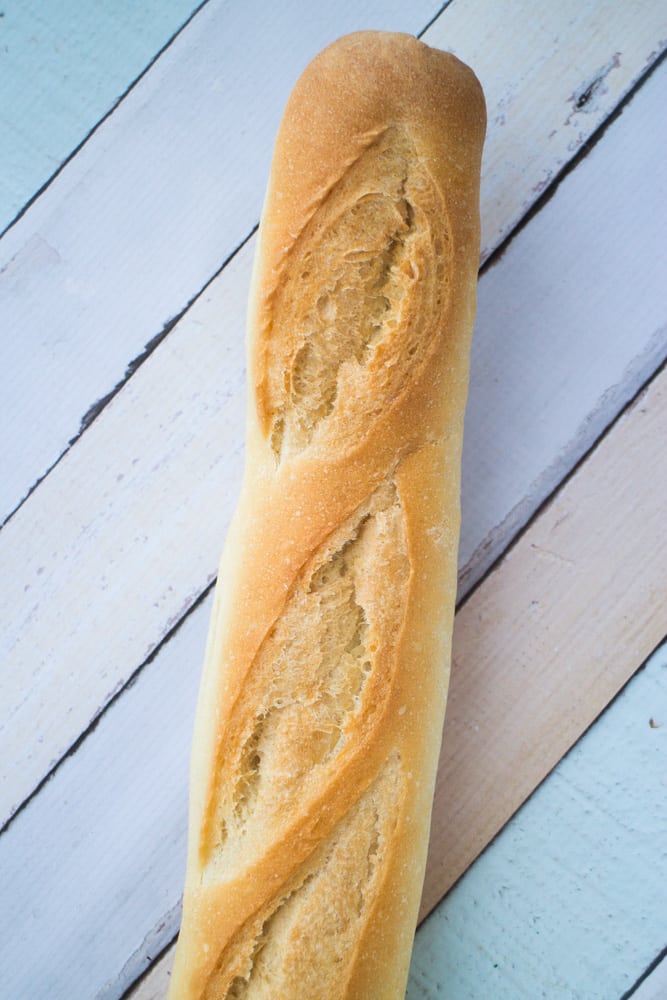 How to Make Stale Bread

Stale bread is the best bread to use for stuffing, but sometimes I don’t plan ahead accordingly. It’s super easy to make stale bread, though! Simply cut up your fresh bread into cubes and place them on a baking sheet. Bake at 350 degrees for 15 minutes, or until “stale”.

The bread becomes stale, and hard, because the oven sucks the moisture out of the bread. I love using this trick whenever I need stale bread in a hurry! 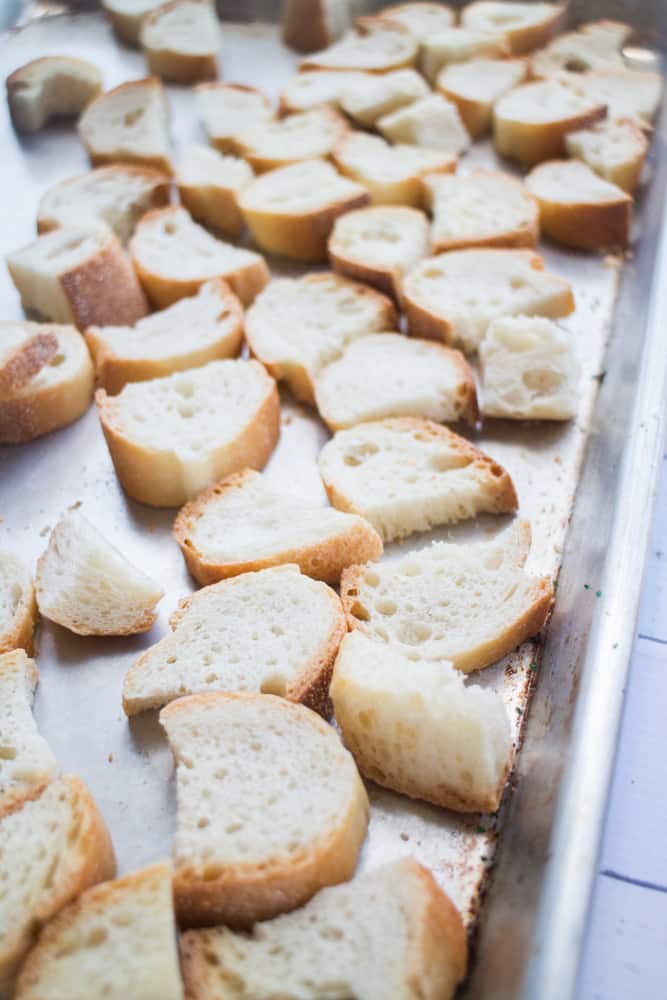 How To Make Bread Stuffing

The vegetables in this stuffing are basic, yellow onions, carrots and celery. Are you a fan of celery? I love it! You’ll want to sauté the veggies in olive oil in a large pot for about 10 minutes. 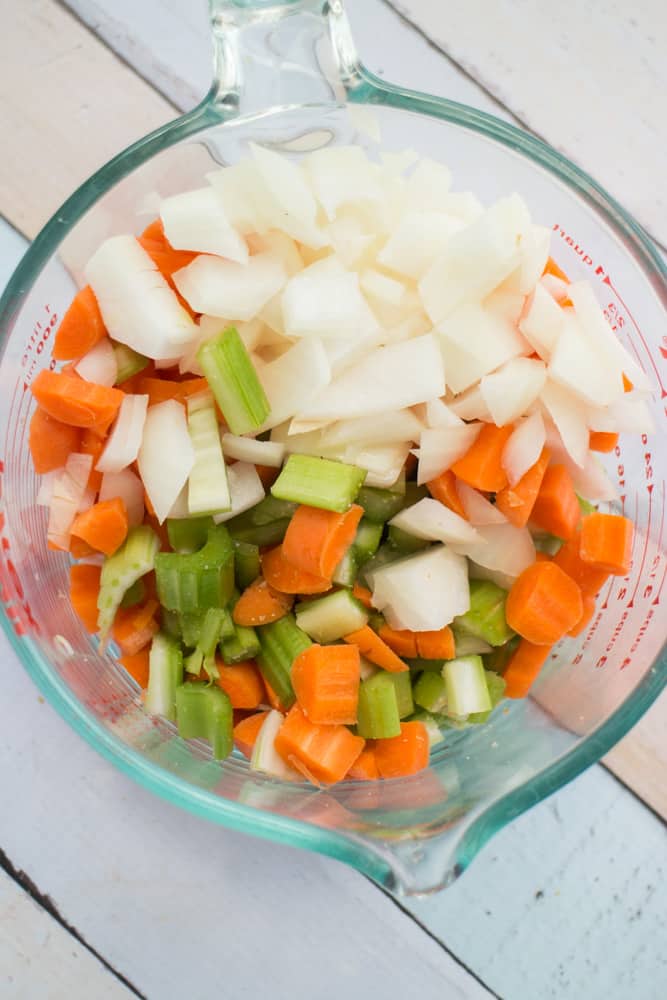 A tasty stuffing calls for all of those yummy savory seasonings and this bread stuffing recipe has all the good stuff! You’ll need parsley, sage, white pepper and thyme. I’ve become such a fan of white pepper over the years due to its taste and appearance! Sometimes black pepper ruins the aesthetic of a dish, so try white pepper if you can.  But don’t worry if you don’t have white pepper, you can use regular black pepper. 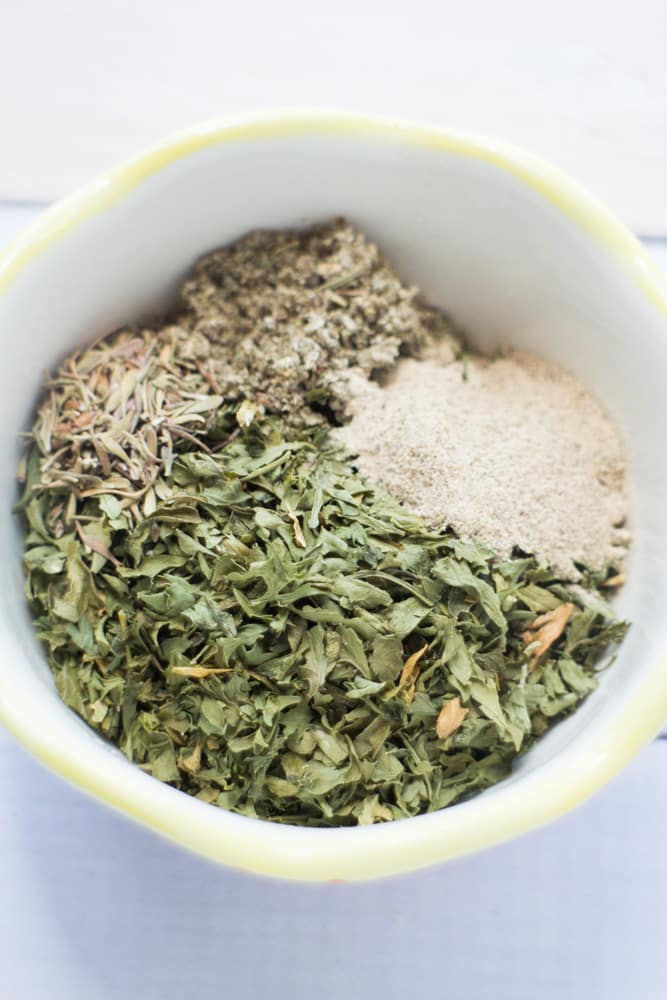 And now the star of this recipe… drum roll please! Come on, a bigger drum roll than that! Thank you.

You might not always associate blueberries with stuffing, but let me tell you, they go together like “chocolate” and “cake” go together. What I’m saying is that it’s a perfect combination!

The blueberries add a slight sweetness to the stuffing, that tastes great with the savory seasonings you’re accustomed to in stuffing. 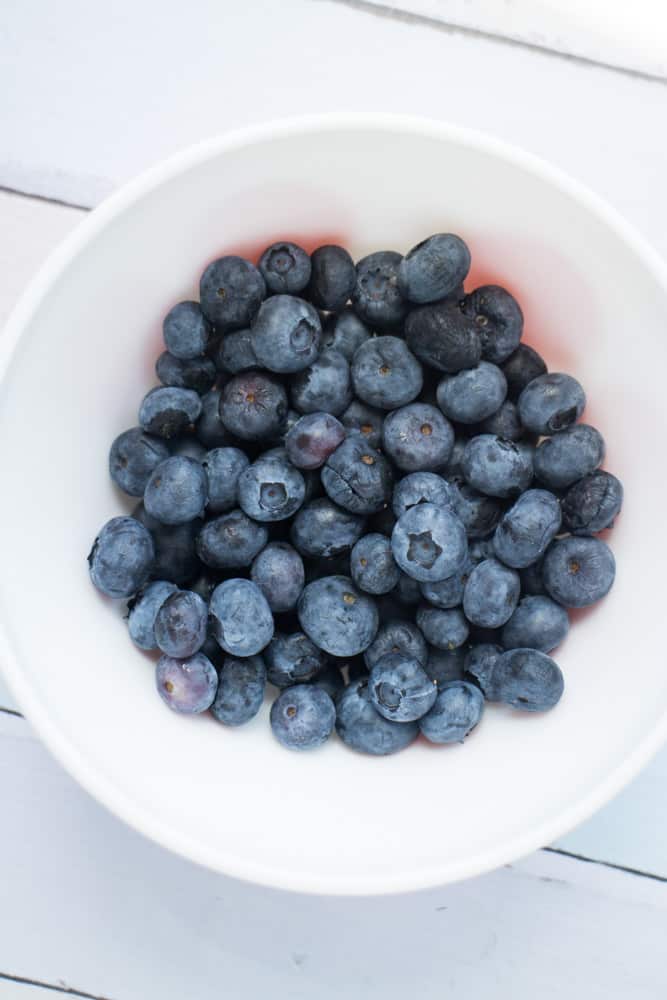 After all your ingredients are done simmering, then fold in the blueberries gently, careful not to squash them. 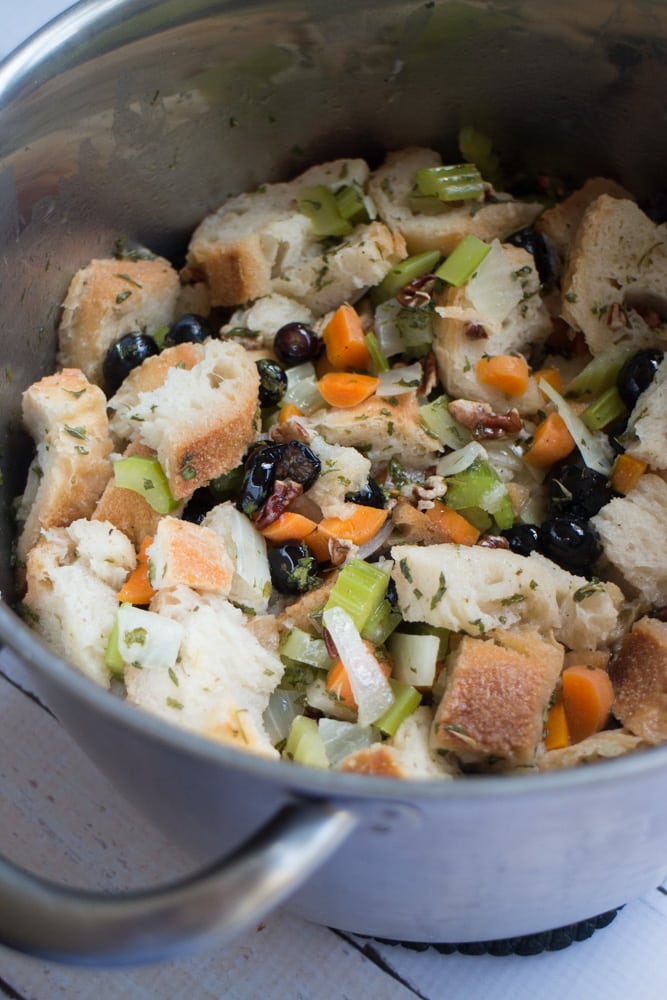 Add all your ingredients into an oven safe casserole dish. You’ll want to bake this dish for 1 hour (covered with aluminum foil) and then 15 minutes more, after removing the foil. If you want a crunchy top appearance, you can broil the bread stuffing for a couple minutes on low, but as always when broiling, keep a CLOSE EYE on it so it does not burn!

Once baked, the blueberries will melt down slightly, but they will still keep their blueberry appearance. Seriously, isn’t this beautiful? Have you ever seen a more pretty stuffing? 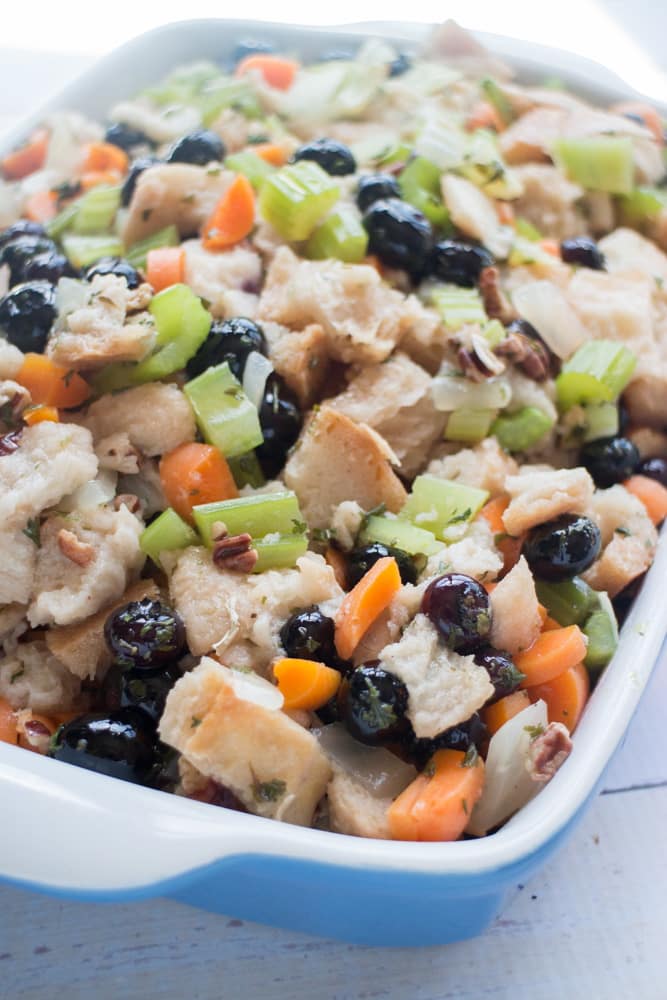 Can You Make Stuffing Ahead Of Time?

Absolutely! This bread stuffing recipe works so well as a make-ahead dish. You can assemble this whole recipe, cover it with foil, and place it in the fridge for up to 8 hours before you plan to bake it. You may need to add more bake time to compensate for starting with a cold dish.

Can You Freeze Bread Stuffing?

Yes, you can freeze this stuffing dish. Simply, bake the stuffing as directed, and then let it cool completely. Once cooled, wrap tightly and freeze. When the time comes that you need the stuffing, defrost it in the refrigerator overnight and then bake it for about 20-30 minutes at 350 degrees. If I’m cooking the stuffing after freezing it, I will not broil it during the first baking session, but instead broil it on the day I’m serving it.

I hope you love this Blueberry Bread Stuffing recipe as much as my family does! Enjoy 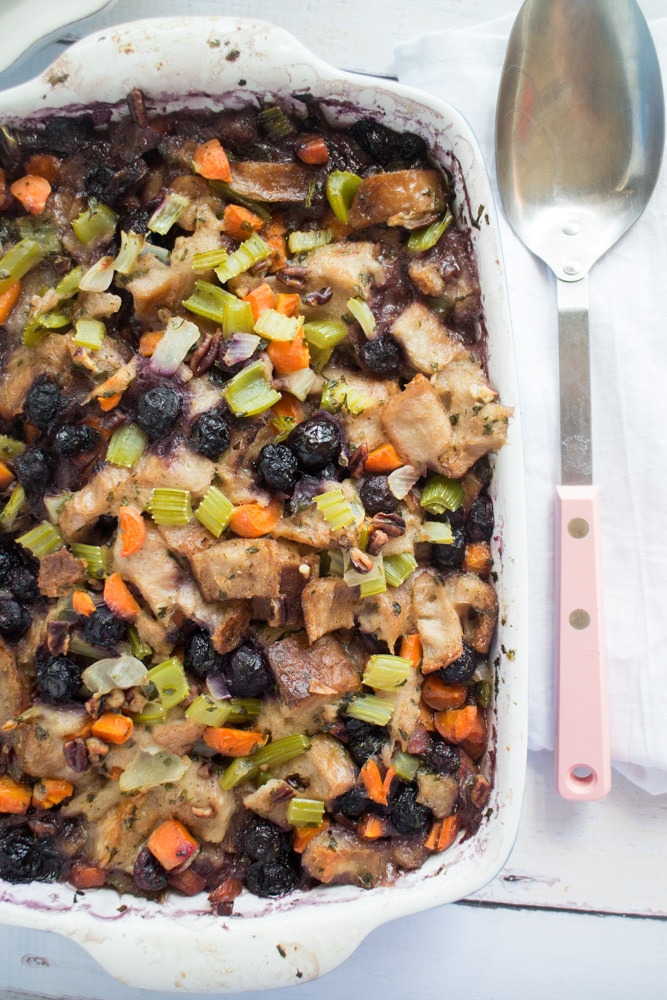 Check out my favorite Thanksgiving Side Dishes too!

Did you make and love this recipe? Give it your review below! 👇 And make sure to share your creations by tagging me or using the hashtag #brooklynfarmgirl on Instagram! 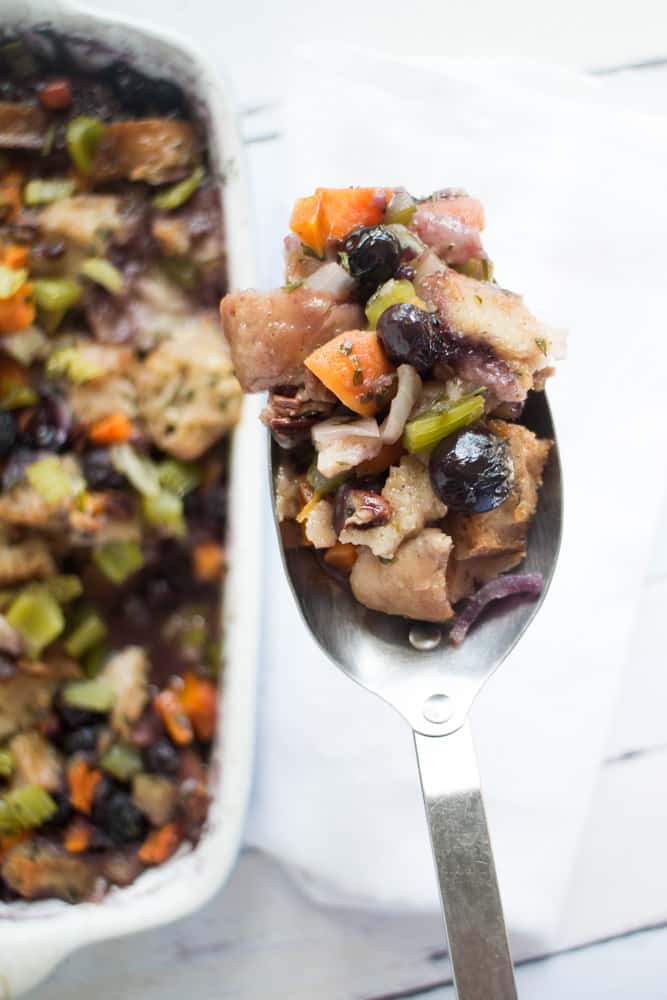 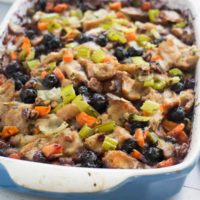 Print
Blueberry Bread Stuffing! Traditional homemade vegetarian bread stuffing with sweet blueberries added in! This comes from a Grandma’s vintage cookbook, so you know it’s going to be the best! It’s easy to make and you can even make it ahead of time to freeze!
Prep Time: 40 minutes
Cook Time: 1 hour 15 minutes
Total Time 1 hour 55 minutes
serves 8

How to Make Stale Bread: Stale bread is the best bread to use for stuffing, but sometimes  I don't plan ahead accordingly.  To make stale bread is easy! Simply cut up your fresh bread into cubes and place on a baking sheet.  Bake at 350 degrees for 15 minutes, or until "stale".    The bread becomes stale, and hard, because the oven sucks the moisture out of the bread.  I love using this trick whenever I need stale bread!

Calories: 160kcal (8%)
Course:Side Dish
Cuisine:American
Keyword:bread stuffing
Did you make this?I love seeing what you’ve made! Tag me on Instagram at @BrooklynFarmGirl and don’t forget to leave a comment & rating below.