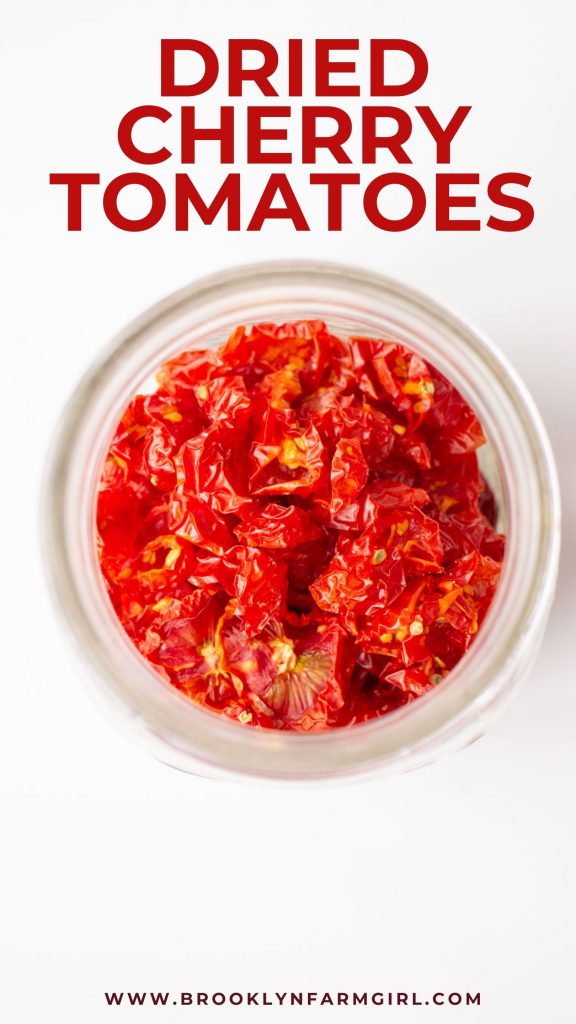 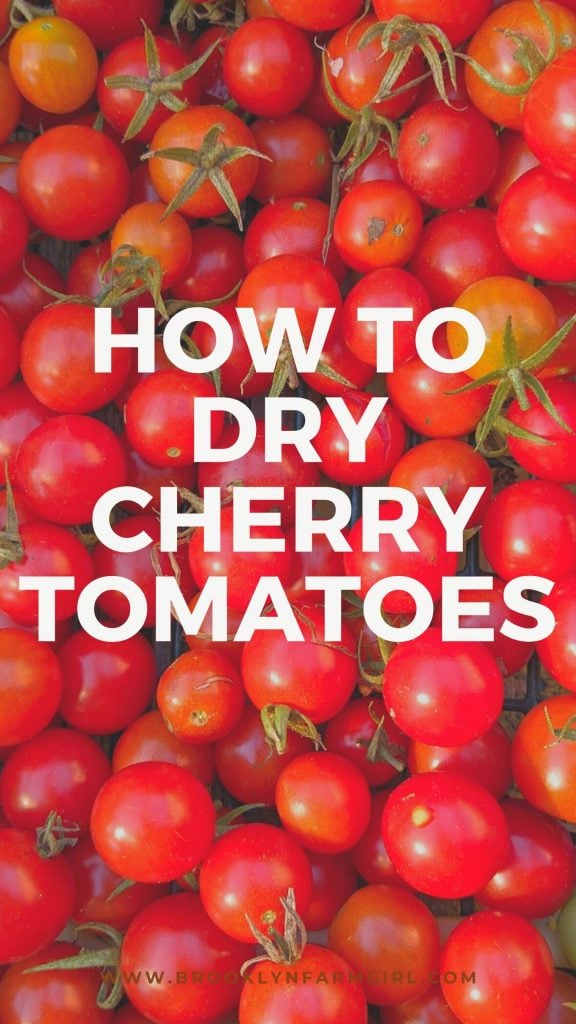 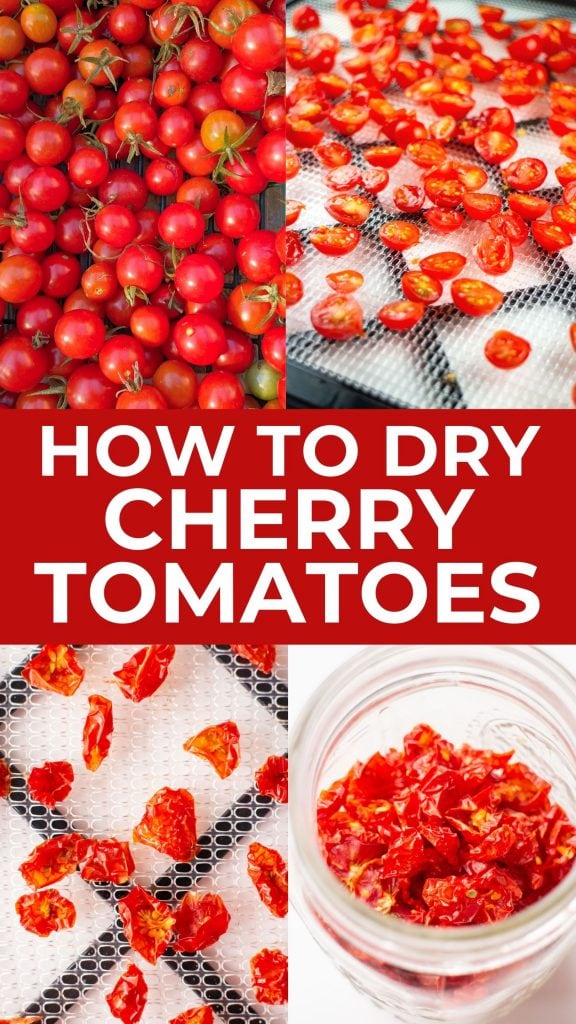 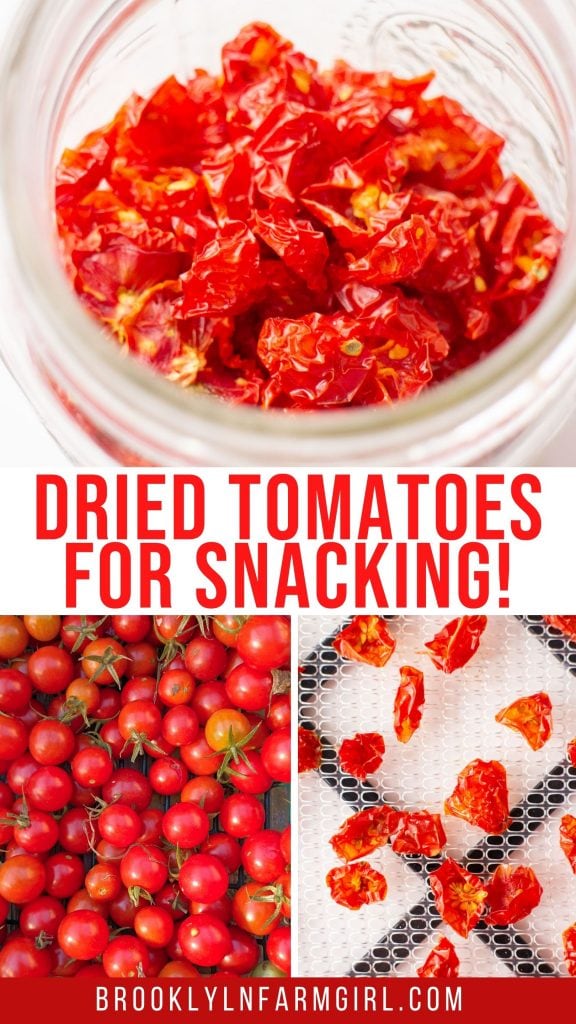 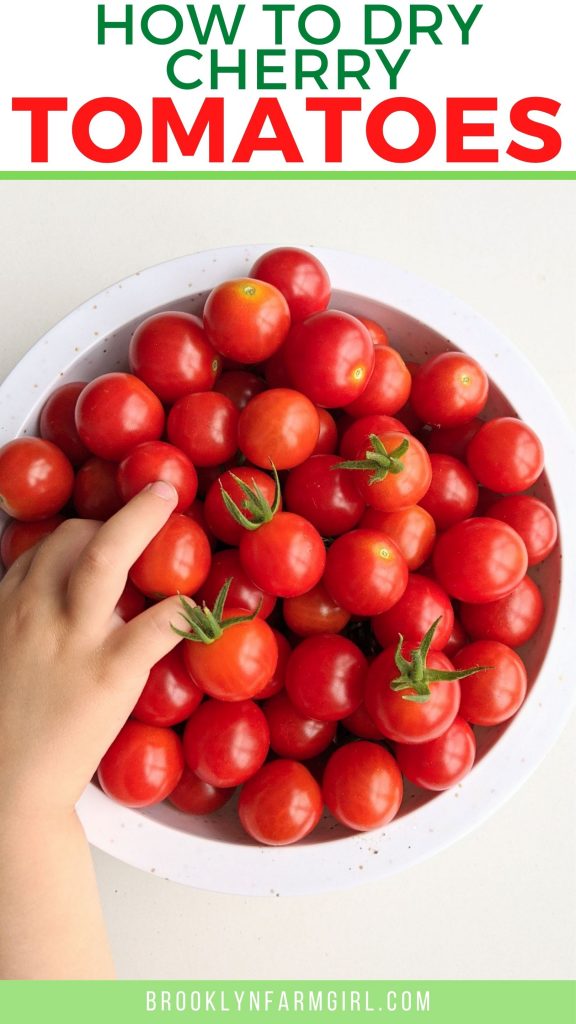 This easy method will show you exactly How To Dehydrate Cherry Tomatoes using a dehydrator. Use dried cherry tomatoes in pasta salads, sandwiches, or even eat them as a snack! It’s the perfect way to use up an abundance of juicy, summer tomatoes.

With all types of tomatoes and vegetables being abundant in the summer, it’s a shame if any had to go to waste! That’s why I love using my dehydrator. I get on dehydrating kicks and all of a sudden my house is filled with dried cantaloupe chips, dried edamame, and more!

Cherry tomatoes are especially useful when they’re dried because they add tons of flavor to pasta salads, fresh green salads, and sandwiches, and they make for a simple healthy snack. That’s why I want to show you How To Dehydrate Cherry Tomatoes step by step.

For this recipe, you’ll need a food dehydrator which is basically a ventilated box that circulates dry heat in order to take the moisture out of whatever is inside the trays. The investment is so worth it as it can save you money and lower your food waste. Whether you have loads of cherry tomatoes or any other type of tomato, your dehydrator will come in handy so you aren’t letting them rot in the garden or go to waste.

The process is very simple and you barely have to lift a finger. I had a good feeling dried cherry tomatoes would taste great but I had no idea how extra delicious they would be! Plus, they filled the house with that fresh and earthy tomato garden smell while they were dehydrating. What could be better?

The best tomatoes for dehydrating

While you can dehydrate almost any tomato you desire, there are some that are better than others. It all depends on HOW you’re going to use them.

Bigger tomatoes such as beefsteak or heirloom tomatoes contain a high water content. This means they’ll take a longer time to dehydrate and the flavor won’t be as concentrated. They’re best enjoyed when mixed with other flavors, like in a burger or sandwich.

The best tomatoes for dehydrating are ones that are small and sweet. This is why I think cherry tomatoes or grape tomatoes are best suited for this method. They have a fairly small water content and are much sweeter tasting, which intensifies when the moisture is removed.  As you can see my daughter loves snacking on them straight from the garden. 🙂

How to dry cherry tomatoes with a dehydrator

The process of dehydrating cherry tomatoes is no sweat at all! You just slice them up and let them dry out for a perfectly sweet and tangy snack:

Wash your cherry tomatoes and cut them in half lengthwise.

Place them on the dehydrating trays in a single layer.

Dehydrate for 9 to 10 hours or until they’re completely dried out.

What to do with dehydrated tomatoes

My favorite way to eat dehydrated tomatoes is the most simple: as a snack! They pair nicely with Mini Blueberry Muffins, added to Cornbread or Baked Spinach Chips when I’m feeling extra healthy.

You can also use them in a cold Tri-Color Italian Pasta Salad during summer or toss them in this Easy Pesto Pasta or Pea Shoots Pasta for something more comforting. When all else fails, use the dried cherry tomatoes on your favorite sandwiches, pizza and flatbread, add some on top of Chicken Parmigiana, or mix them into salads.

More fun things you can do with tomatoes 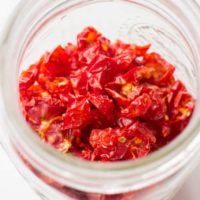 How to Dehydrate Cherry Tomatoes

Print
This easy method will show you exactly How To Dehydrate Cherry Tomatoes using a dehydrator. Use dried cherry tomatoes in pasta salads, sandwiches, or even eat them as a snack! It’s the perfect way to use up an abundance of juicy, summer tomatoes.
Prep Time: 10 minutes
Cook Time: 9 hours
Total Time 9 hours 10 minutes

Course:Side Dish
Cuisine:American
Keyword:dehydrate tomatoes
Did you make this?I love seeing what you’ve made! Tag me on Instagram at @BrooklynFarmGirl and don’t forget to leave a comment & rating below.