Oven Baked Sun-dried Tomatoes in olive oil and Italian spices recipe.  This easy homemade recipe will leave your kitchen smelling great and you saying MMMMMM! Includes directions on how to make and freeze sun-dried tomatoes. Use them in pasta, chicken, shrimp, bread, pizza, dip and so many other recipes!

When life gives you a whole lot of tomatoes you make cherry tomato sauce, roma tomato sauce, stewed tomatoes, diced tomatoes, tomato soup, slow cooker tomatoes….. and then you make these Sun-dried Tomatoes!  Can you tell I really love tomatoes? 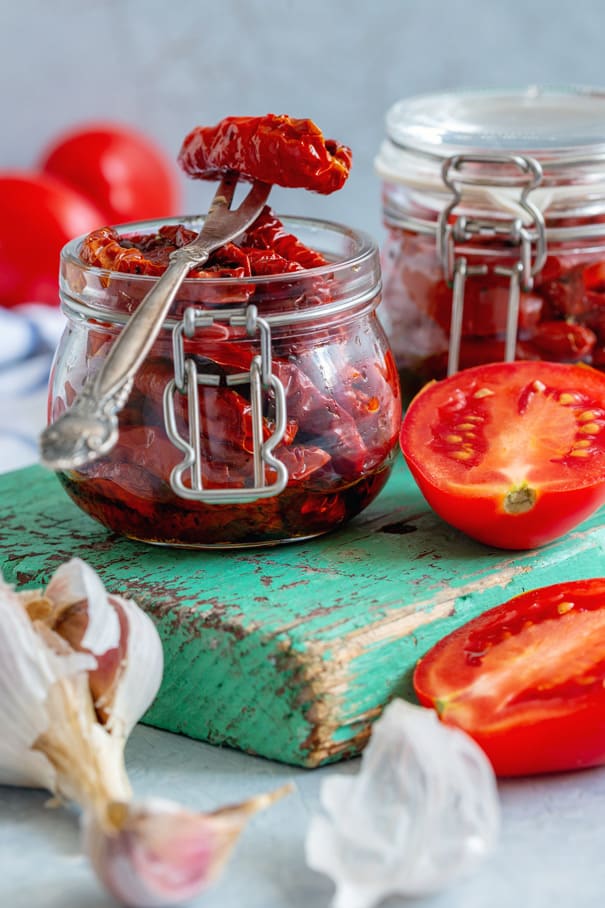 How to Make Sun-Dried Tomatoes in the Oven

Baking the tomatoes in my opinion makes the best sun-dried tomatoes.  They’re rich in flavor, they don’t loose their color and they taste as authentic as those fancy store bought bottles that cost a small fortune. 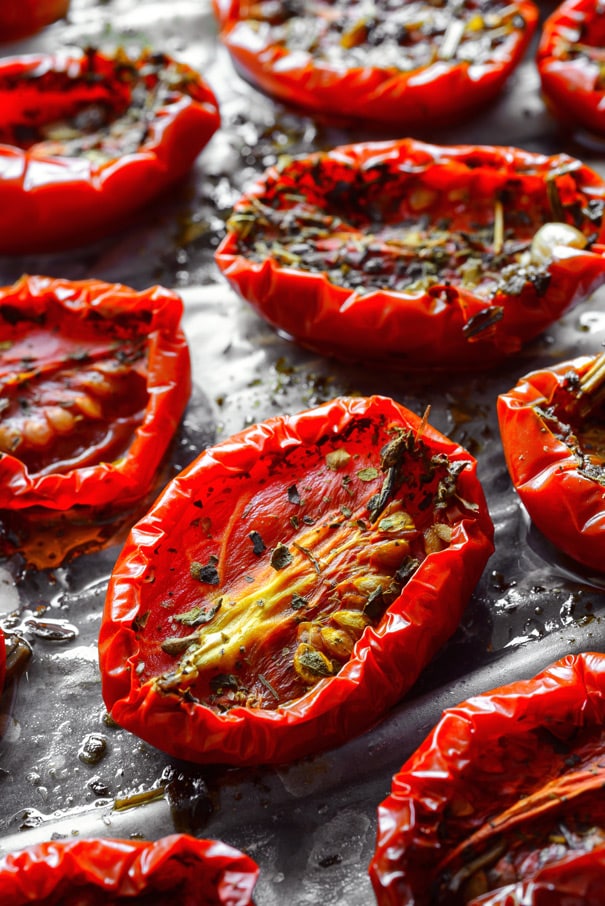 The one thing you have to accept is that sun-dried tomatoes aren’t instantly made.  Even though these are so easy to make, they take a couple hours to turn leathery, so make sure you’ve put a few hours aside when you plan on making them.

I know you’re thinking, I don’t want to wait 5 hours before they’re done! I know, but trust me, YOU DO!  THEY ARE WORTH IT! Sorry, had to write that in capital letters because they are SO GOOD!

Preheat your oven to 200 degrees.  Add your halved tomatoes on a nonstick baking sheet.  You guys, this is really important.  Make sure you are using a non-stick sheet as the tomatoes are going to stick since they’re baking for so long.

If you don’t have a non-stick baking sheet, use parchment paper.  This will make sure the tomatoes don’t stick and you have a easy cleanup! 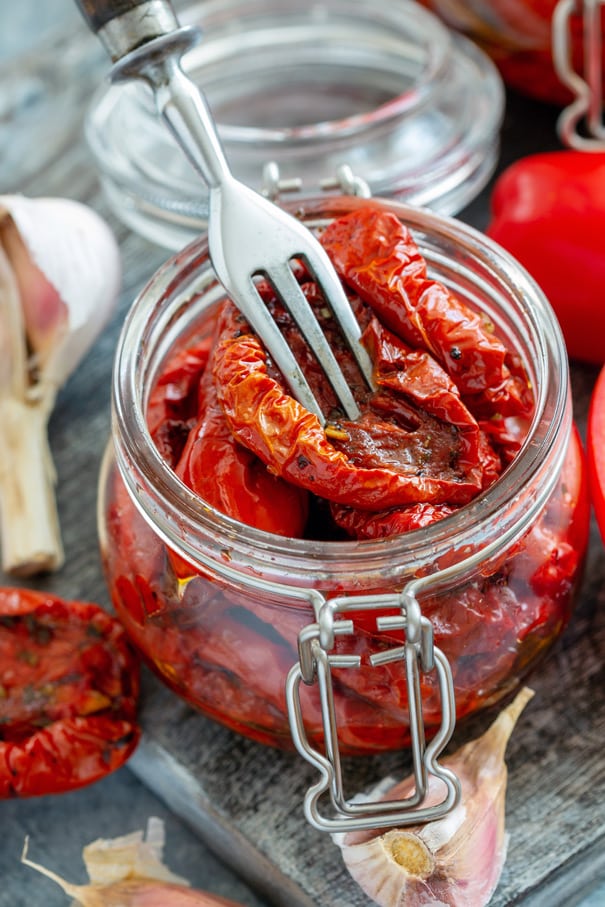 When are my Sun-Dried Tomatoes done?

The sun-dried tomatoes are done when they are a leathery texture.  You want to pull them out of the oven before they are crispy as that means they are overcooked! They should not be brittle and break apart.  Instead you’re looking for a leather-like texture.

You want to check your tomatoes about every 30 minutes to get the perfect texture.   On average, sun-dried tomatoes take 4-8 hours, depending on how big your tomatoes are.  Small halved tomatoes range around 4, while bigger tomatoes can take 8 hours (or even longer).

Ingredients are simple. I bet that you already have everything to make them! 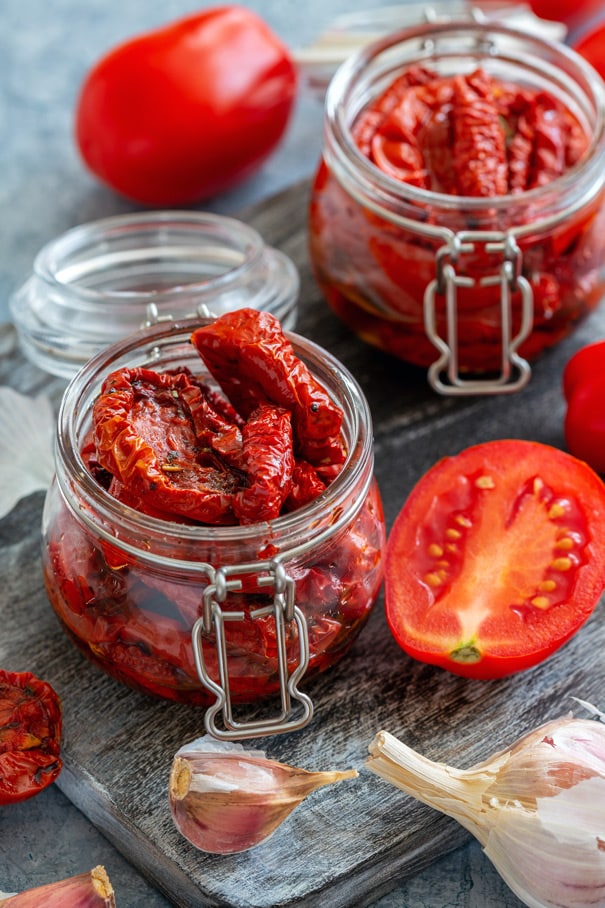 How many pounds of tomatoes do I need?

When it’s raining tomatoes in the garden I often will make 3 batches at once, one to keep in the refrigerator and 2 to freeze.

How to soften sun dried tomatoes in oil?

Once the sun-dried tomatoes are finished, add them in a mason jar.  Pour olive oil on top of to cover the tomatoes.  The oil is going to help soften the tomatoes and add lots of flavor.  Next, add your cloves of garlic into the mason jar, give it a stir to mix, and then cover.

Can I freeze Sun-Dried Tomatoes?

Yes, you sure can.  Like I mentioned above, I freeze a few batches of these yummy tomatoes to enjoy them in the Winter time over rice, pasta, or use in casseroles.

Place the sun-dried tomatoes in a freezer bag, and add just a tablespoon of olive oil to coat them.   Now freeze.  When you’re ready to use them, remove from the freezer and soak the freezer bag in a bowl of warm water.  This takes about 15 minutes to defrost.  Now use them as you have planned! 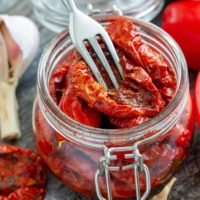 Print
Oven Baked Sun-dried Tomatoes in olive oil and Italian spices recipe.  This easy homemade recipe will leave your kitchen smelling great and you saying MMMMMM! Includes directions on how to make and freeze sun-dried tomatoes. Use them in pasta, chicken, shrimp, bread, pizza, dip and so many other recipes!

If you want to freeze them see the full post for freezing instructions.

Calories: 10kcal (1%)
Course:Appetizer, Main Course
Cuisine:American
Keyword:italian tomatoes, sun-dried tomatoes, tomato recipe
Did you make this?I love seeing what you’ve made! Tag me on Instagram at @BrooklynFarmGirl and don’t forget to leave a comment & rating below.