Easy barbecue chicken made in the crockpot in 4 hours. This makes juicy, tender BBQ chicken! Serve on buns or alongside your favorite side dishes!

This crockpot barbecue chicken is so good! Made with BBQ sauce and brown sugar, it makes juicy flavorful chicken that can be served next to your favorite side dishes, like mac and cheese, corn, pickles, potato chips and baked potatoes, or shredded up and served on a bun, or even on top of egg noodles or rice!

Since the recipe calls for 2-3 pounds of chicken, this usually always gives us leftovers for 2 nights, so it’s a great opportunity to try 2 different meals with this barbecue chicken! Hope you like it as much as we do!

How to Make Barbecue Chicken in the Slow Cooker

Place chicken breasts at the bottom of the slow cooker.

In a small bowl mix up the barbecue sauce, Italian salad dressing, brown sugar, Worcestershire sauce and liquid smoke. A little note about BBQ sauce: it matters. Choose a BBQ sauce that you know tastes good and is a favorite, for us it’s either homemade BBQ sauce or Sweet Baby Ray’s.

Place sauce mixture on top of chicken in slow cooker.

Cook until chicken is fully cooked

Here’s where it’s your choice: serve as is with your fav sides (like sweet cornbread!), or shred up for a chicken sandwich. I usually prefer to shred up the chicken and serve on buns, so I shred it up, add back to slow cooker and let it sit for an hour more to soak up the sauce.

Can I shred the chicken up?

Absolutely! Shredded barbecue chicken is so good, especially served on hamburger buns! My favorite way to do this is cook on HIGH for 3 hours, shred the chicken and then cook for 1 more hour. By shredding it up and adding back to the slow cooker it really absorbs all the barbecue flavor.

Can I use this recipe for slow cooker pork ribs?

You sure can! Make the recipe as instructed, but instead of chicken use boneless pork ribs. Cook on LOW for 8 hours. 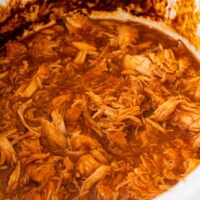 Course:Main Course
Cuisine:American
Keyword:crockpot barbecue chicken
Did you make this?I love seeing what you’ve made! Tag me on Instagram at @BrooklynFarmGirl and don’t forget to leave a comment & rating below.