Get the Eugene O’Neill reference in the title? Kinda? Sorta? I know it’s not the best, but it’s all I could come up with.  I love Eugene O’Neill.   What’s my favorite play of his? Well of course The Iceman Cometh.  In doing a post on spinach I didn’t know this was going to take a twist on a playwright born in 1888, but I just write what comes to my head.

What else comes to my head right now?
Kissing.
Licking.
That’s what my cat, FiFi Bofinkles, is trying to do to me right now.  My fingers are being licked and then she comes close and rubs her head on my chin and says “kiss me lover”.  We are in love.
Ok, now that she’s laying on my keyboard so I have to move her belly every time I want to press the letter “p” key, we can begin.

New Zealand Spinach!
Did you even know it existed? I sure didn’t.. but boy do I know what it is now.  This spinach is a monster.  I’m not talking little monster either.  I’m talking big monster yelling “look at me, love at me, pick me, eat me because I’m going to keep growing”.  Isn’t what what you want in a garden plant?  Sure, but what happens when it comes as a surprise?

Last winter I received a package in the mail from my very sweet Australian Friend Autopsy Jude (actual name Wanda).  Inside were various seed packets, many heirloom and varieties I never heard of.  One of them was New Zealand Spinach. 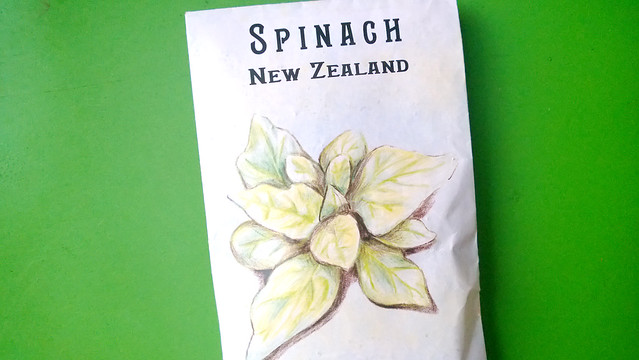 When it came January we planted a few of our regular spinach seeds and then also a few of this New Zealand variety inside.   When it was transplanted outside in April the other spinach plants thrived and became big while the New Zealand spinach looked deathly.  They were about 1 inch high and we were throwing in the towel.  We buried the plants disappointedly.  June came, our usual spinach plants bolted due to the heat.  Ok, that’s fine, we got our spinach harvest this summer and now it was over.  Then late July hit and it became really hot.  And we started to notice these 2 green plants start to push through the soil where the 2 New Zealand plants were but they had soil on top because we buried them when we thought they were goners.  Were they weeds?  Then the plants started to really push through.  The weeds looked pretty so we kept them.  Then August came and our 4×4 box was completely taken over by these 2 monster plants.   They were not weeds. It was New Zealand Spinach.  We didn’t know this at first because when a plant shows up 8 months after planting it’s seed it will blow your mind.  I googled and then the “AHA, OMG” moment hit when I finally found the plant that looked just like it.  It was it.  Turns out New Zealand spinach loves heat.  No, it lives for heat.  Give it 100 degree days.   So 8 months later after we planted the seeds we officially have the largest spinach plants we have ever grown surprisingly show up in a box where sugar snap peas are supposed to be growing.  Oh New Zealand spinach, what a big surprise you were! 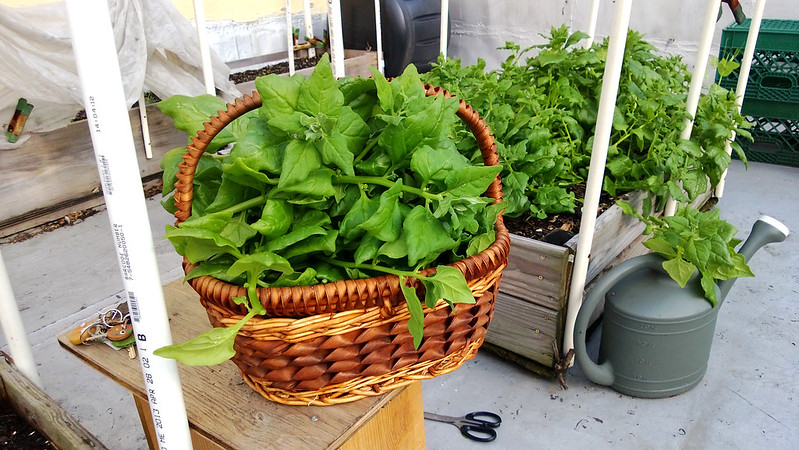 Again, it loves heat. Don’t think you can grow spinach during the hottest summers? Get this variety! The pack reads “This variety takes the heat and keeps producing all summer; tasty.”
Often referred to as “Tetragon”.
It’s great for a ground cover plant. It will spread several feet! Also it can grow up to 2 feet high!
Harvest regularly.  You will need to because it grows so much, but also it will promote new growth.  You can cut it’s thick stalks almost down to the bottom of the ground.  It will still keep growing….
Eat it as you would spinach or salad greens. Saute it. Steam it. Eat it raw.  Put it in soups.  Put it in pasta dishes.  Go crazy.
Many people describe it as tasting “marine,  seaside air”. I saw that in multiple places when searching online.  I have no idea what that would even taste like.   What does “seaside air” taste like?  I don’t know.   It tastes like greens to me, but without the bitter taste that sometimes happens afterwards with regular spinach.

Things I have planned for this plant:
Spinach chips
Pasta Dishes (so many)
A sweet.  Spinach and sweets? Hey it can happen! I have some tricks up my cookie monster printed shirt.. 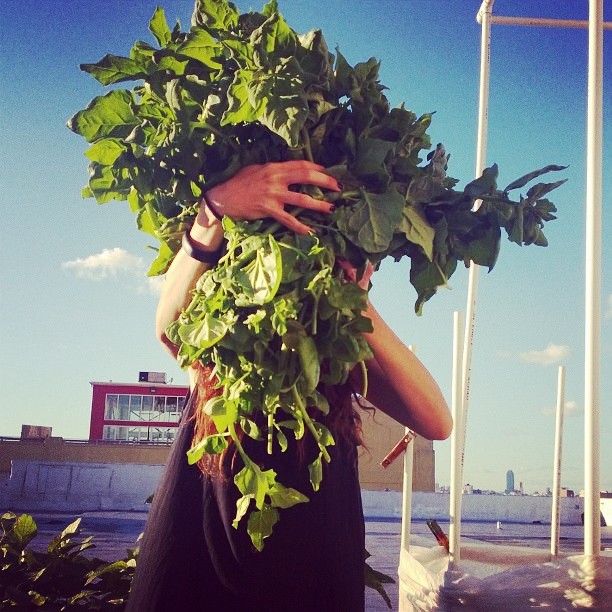 I am now Spinach Monster Mom.

So let’s meet this summer’s winner of the “Surprise! I’m here” garden award.

July 6, took down the Sugar Snap peas, nothing was really seen at the base of the box except some weeds. 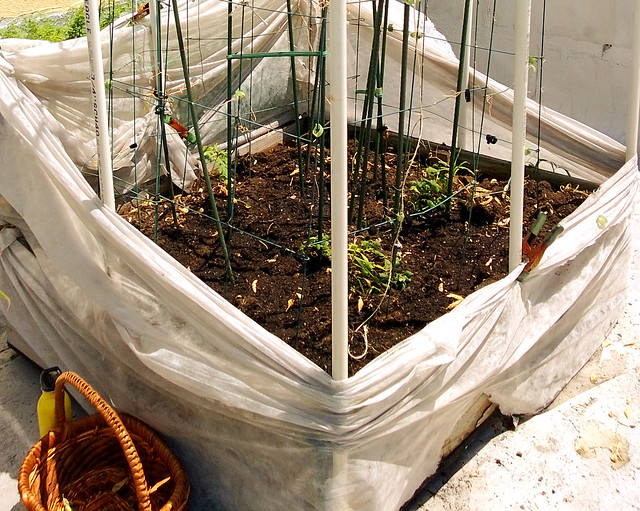 This is July 17.  We were like “Oh, what are these cute little weeds that appeared?” Well let’s just plant the new Sugar Snap Peas around them… 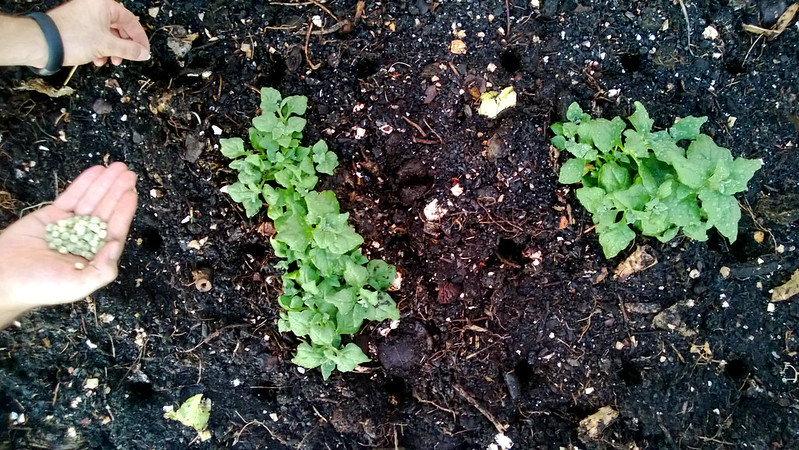 July 28, oh these little plants sure are getting bigger.. wait, what are they? 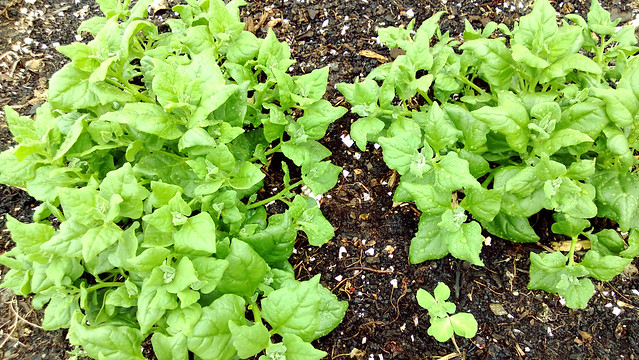 Then it happened.  August.  We realized  it was the New Zealand spinach.  Oh my goodness,it’s taking over. 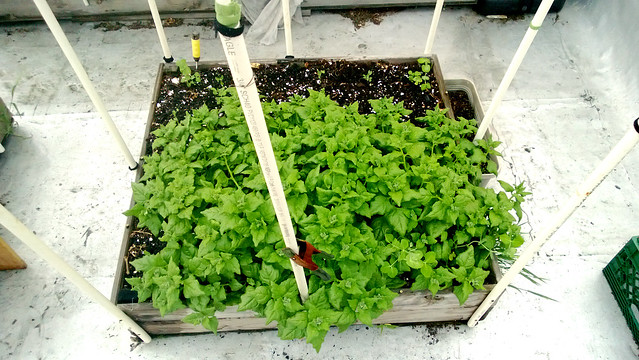 Each leave almost looks like a succulent.  It looks thick and shiny.  It’s hard to find a not perfect leaf. 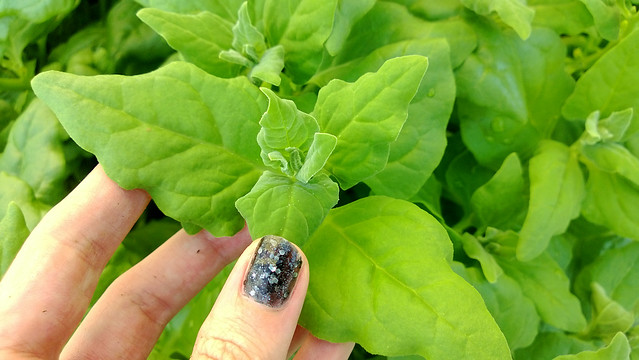 They are some of the prettiest spinach leaves I’ve ever seen.. 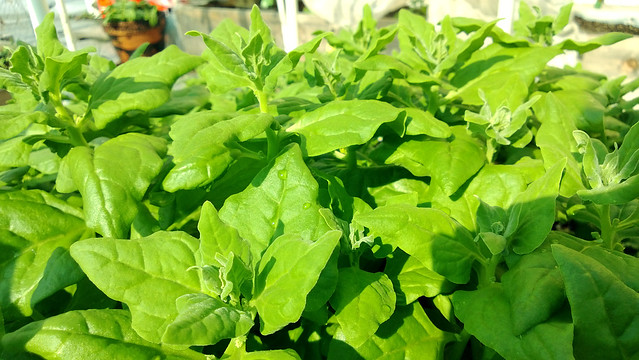 The stalks are big and strong.  Each stalk has multiple leaves on it. 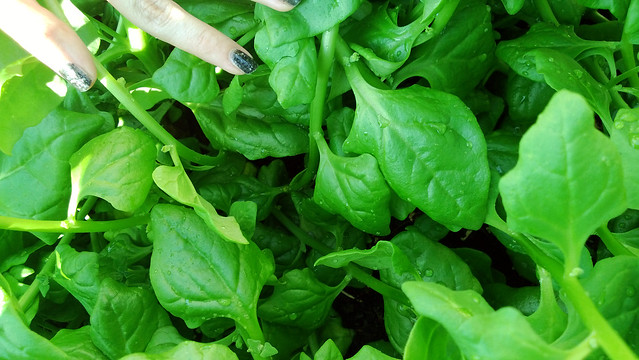 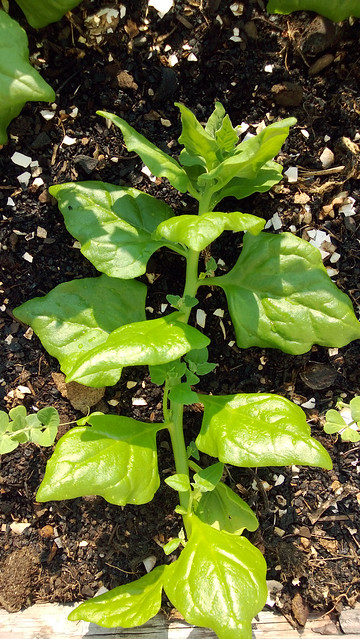 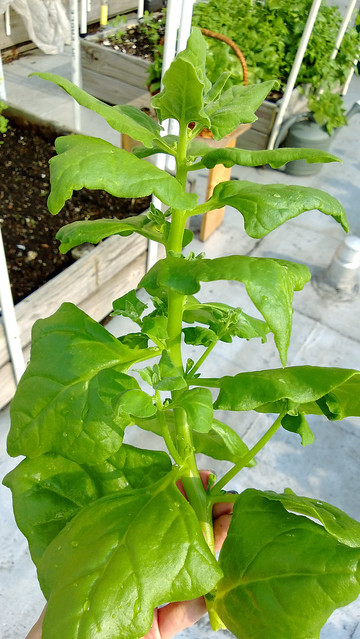 I found multiple sugar snap pea plants hiding inside the spinach plant, tying it’s tendril around the spinach. I think they are BFFs now. 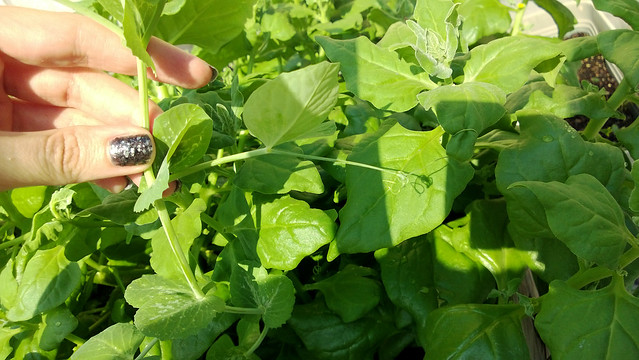 So today I harvested some spinach, a giant basket full….

And this is the amount that is left.  Does anyone need any spinach?  Seriously. 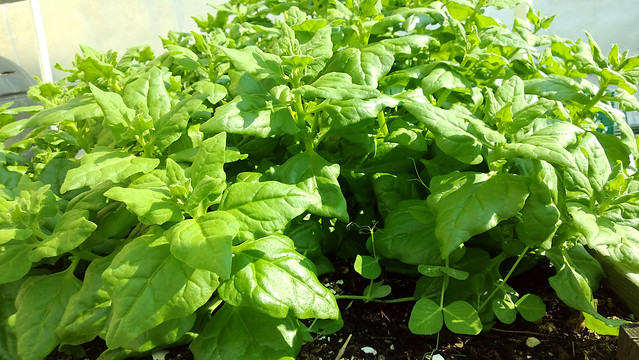 What a great summer surprise! Thanks spinach!