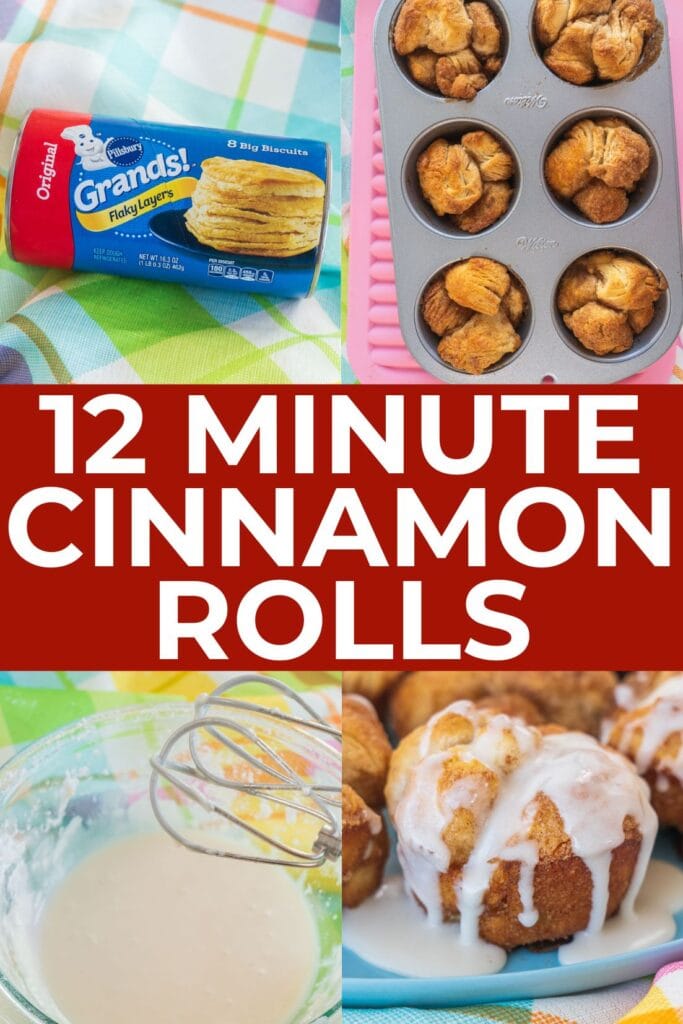 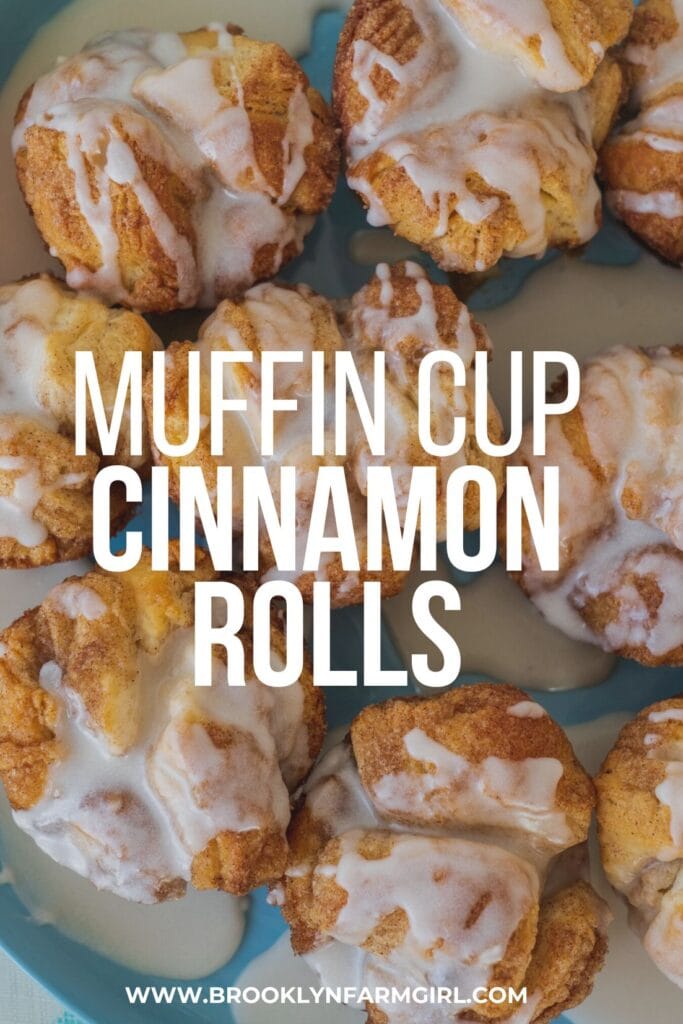 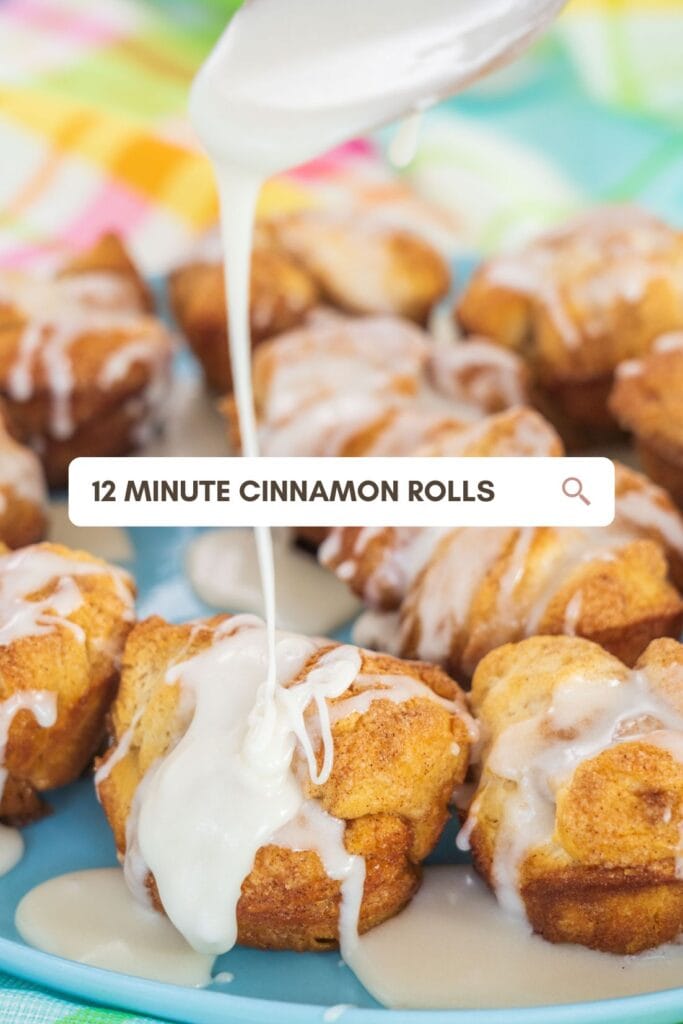 Easy Cinnamon Rolls ready in 12 minutes, made in muffin pans! Use refrigerated biscuits to make Cinnamon Rolls with powdered sugar icing that your kids will love!

You’re going to love these sweet and gooey cinnamon rolls because they are so easy to make! You don’t need to spend the time making dough from scratch, instead just pick up some refrigerated biscuits from the grocery store and use that for the dough.

Trust me, these will be a favorite for a Saturday morning breakfast with the family!

If you have a sweet tooth, nothing quite beats sinking your teeth into fluffy cinnamon rolls in the morning along with your morning coffee. The best part is this delicious recipe is super easy to make and will take your sweet rolls to a new level. Glaze the top of your cinnamon rolls with your homemade icing for a burst of sweetness with each bite.

No more spending money on overpriced cafe pastries (you know what I’m talking about). With this easy recipe, your sweet tooth cravings will be satisfied, and you’ll save a ton of money. Don’t be surprised, when you make them once, you’re going to be tempted to make them again and again.

What are the best biscuits to use?

You’ll want a 16 ounce container of refrigerated biscuits. I like using Pillsbury Grands big biscuits. I know that Annie’s, Immaculate and most store brands (like Great Value and Trader Joe’s) make their own variety too, so grab whatever is your favorite.

How to Make Easy Cinnamon Rolls

Preheat the oven and prepare the muffin pan. This recipe will make around 12 cinnamon rolls.

Mix the melted butter, sugars and cinnamon together and pour into a large plastic bag. I like to wrap the bag around a bowl to make it easier to pour in.

Rip the biscuit dough into smaller pieces and place them in the cinnamon mixture, seal the bag, and shake to coat them thoroughly.

Place the biscuit pieces into the muffin cups.

And bake until golden brown. Remove from oven and allow to cool before adding the icing (or the icing will melt right off).

In a mixing bowl, mix the powdered sugar, milk, butter, and vanilla extract until you get a smooth icing consistency.

Pour the vanilla icing on top of the rolls. MMMMM! Just looking at this picture makes me want to eat one! Or six! 🙂

Serve and enjoy your sweet and warm rolls!

There’s no way there will be leftovers! But if there is, store leftover cinnamon rolls in an airtight container in the refrigerator. Heat them up in the microwave for just a few seconds as you don’t want the icing to melt right off.

What’s the difference between cinnamon rolls and cinnamon buns?

Cinnamon rolls are glazed with icing while cinnamon buns have a brown sugar and butter glaze already on the pastry before baking.

Why do my cinnamon rolls get hard?

Typically cinnamon rolls become hard when someone uses too much flour. However, the beauty of this recipe is that it won’t be an issue if you use refrigerated biscuits that you can buy from the store! No need to spend all of your time making homemade dough!

If you’re referring to leftover cinnamon rolls, often cinnamon rolls can become hard when they aren’t stored properly. If you’re using plastic wrap, I’d suggest double (or even triple) wrapping it, and make sure to wrap it tightly.

I hope you enjoy these incredibly soft and delicious cinnamon rolls!

Check out some of my other favorite muffin recipes: 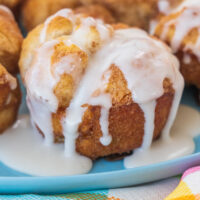 Course:Breakfast, Dessert
Cuisine:American
Keyword:easy cinnamon rolls
Did you make this?I love seeing what you’ve made! Tag me on Instagram at @BrooklynFarmGirl and don’t forget to leave a comment & rating below.