We had a beautiful weekend (it was 80 degrees!) so we decided to visit the land to plant the tree and do some Spring cleanup before planting season begins.  We haven’t been Upstate in almost 2 months so it was nice to get away and bask in the sunshine while digging around in the soil on a lazy Sunday.  Our Christmas tree has been inside our apartment since November, a little longer than we would have liked to keep it inside but it would have gotten cold shocked if we planted it earlier.   Somehow Matthew and I both forgot we now have a greenhouse that we could have moved the tree into during the Winter months – duh – we’ll remember this next year!  We’ve kept the tree close to the windows inside, and well watered, but it definitely showed signs of wanting to move outdoors.   We lost needles on the bottom section of the tree and had some browning, but the upper section of the tree looks great and has had lots of new green growth indoors. 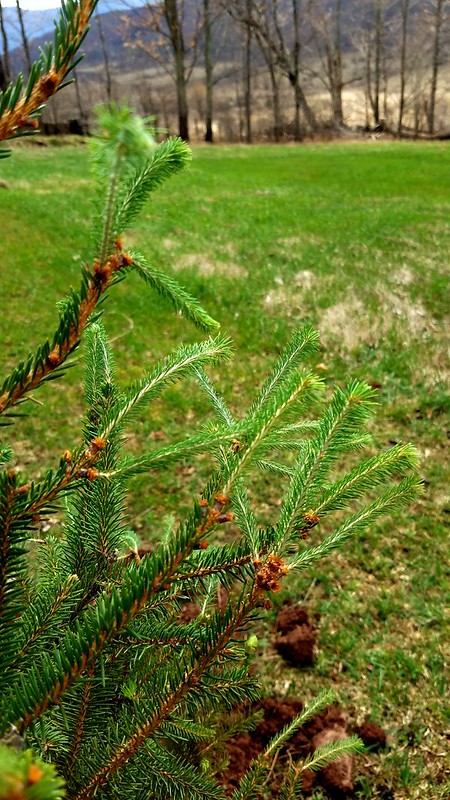 The 2016 Christmas Tree is a Norway Spruce that is supposed to grow quicker than other varieties (we’ll see!).  We originally bought it at a tree nursery Upstate in November,  drove it back to NYC, and now it was coming home and going back Upstate!  This tree was quite the traveler!   The tree had a enormous soil bulb on it and weighed close to 250 pounds.  I have no idea how Matthew managed to move this by himself, but he did, what a strong guy! 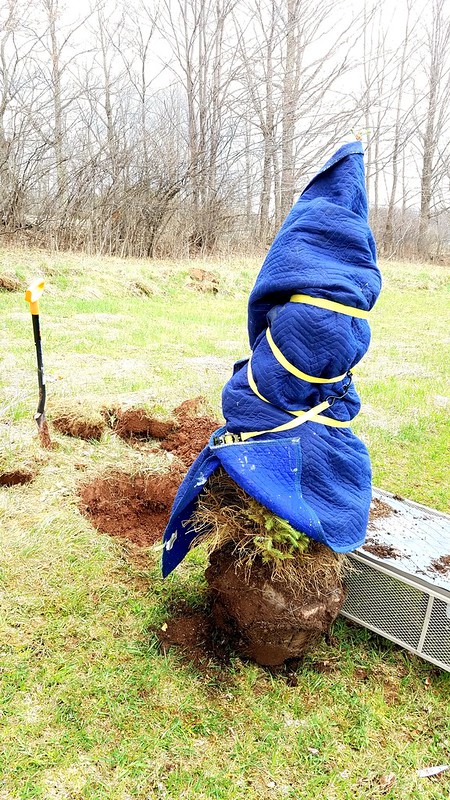 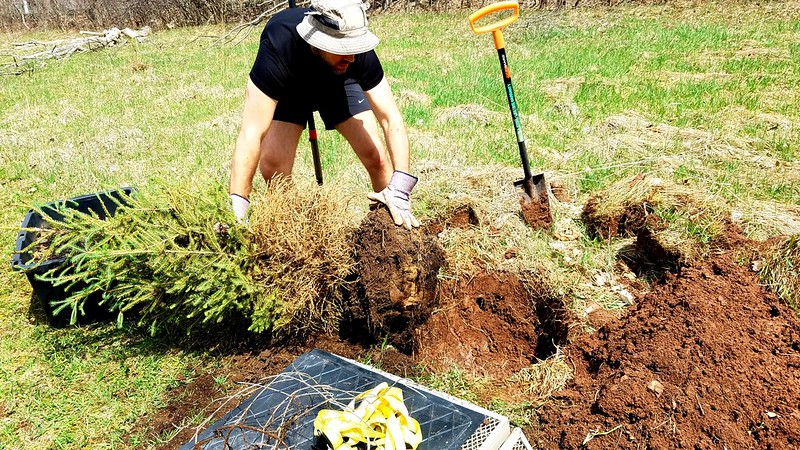 We (Matthew) dug a hole and then figured out a system of moving it from the car to the cart to the ground.   I don’t have any pictures but moving it from our apartment to the car was even harder but somehow we made it work. 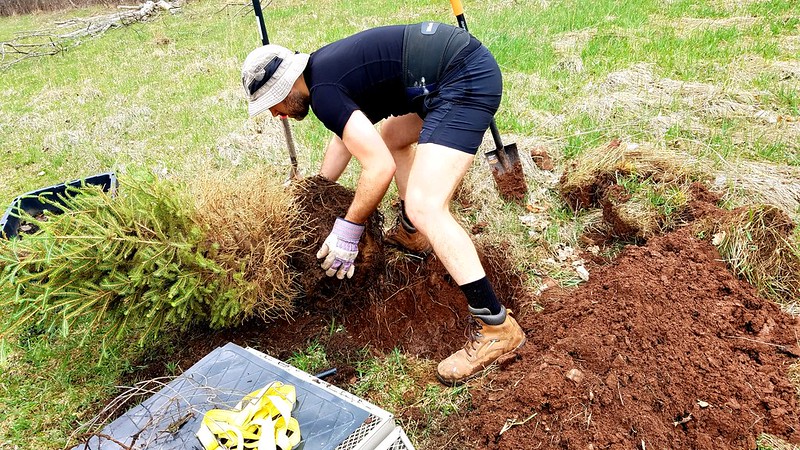 Then we (Matthew) shoveled some potting soil mix around the edges and packed it into the ground. 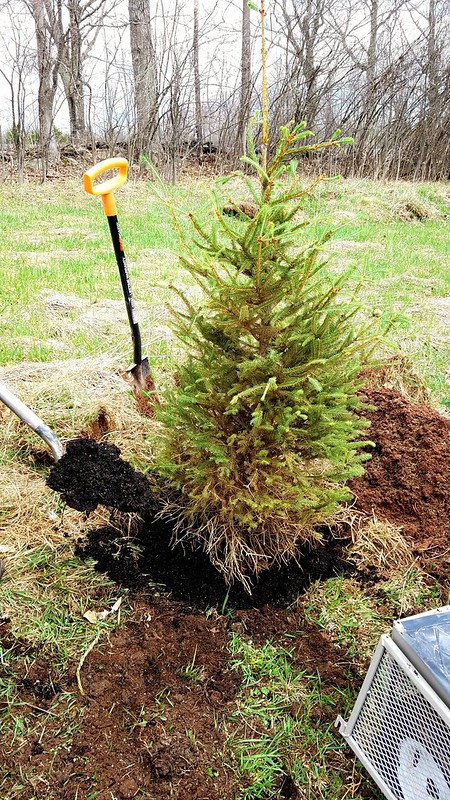 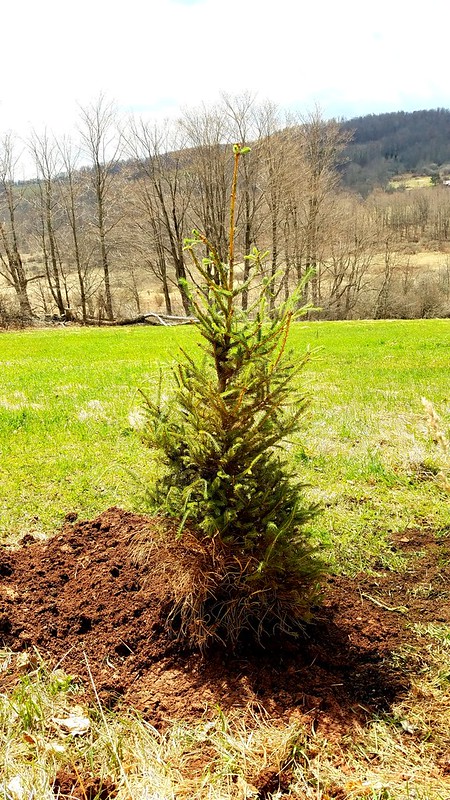 If you look in this picture you can actually see the 2015 Christmas tree behind it – it’s like Big Brother Tree protecting Little Brother!  The 2015 tree has grown so much in the past 16 months – it’s gotten much puffier and wider! I’ll try to grab some comparison pictures to post later on! 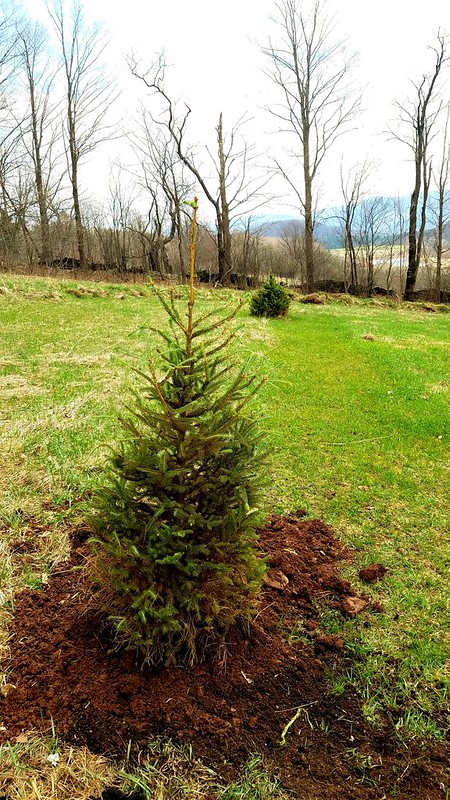 The temperatures aren’t going to stay this high so I rolled some fabric around the tree to protect it from cold weather shock it might feel later this week.  Hope it’s not too lonely and gets to know the rest of the trees!  Grow big little guy! 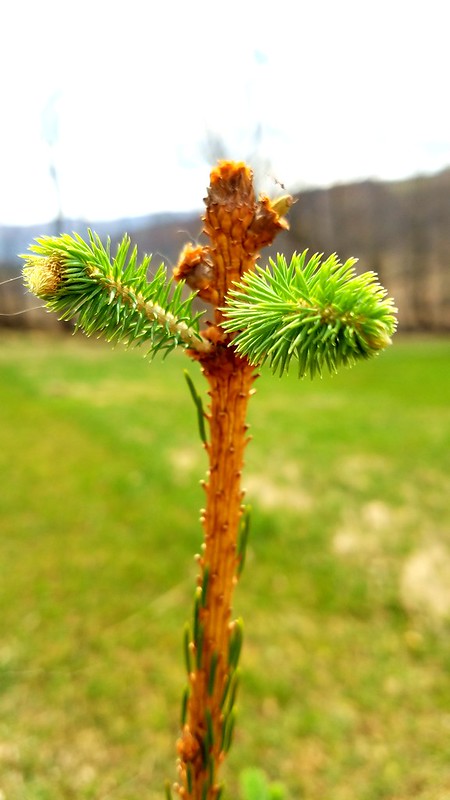