I had a successful pregnancy and then 3 recurrent miscarriages in a row in a year. Here’s my story and how I’m trying to stay positive.

When I got pregnant this time around, I had really positive feelings about it. I told myself that this baby was going to survive and that Enceladus was going to have a sibling. I’m not sure why I was so positive, but I was. So break my heart, but I had a miscarriage. Again. And again.

Let me back up a bit.

In 2017 we had a healthy baby girl. Her name is Enceladus and she’s the joy of our lives. She’s my best friend and I love her beyond describable words. That pregnancy (my first ever) was pretty much uneventful ( I mean besides changing our lives forever). I got pregnant pretty quickly after we started trying. There weren’t any complications and I felt good throughout the entire pregnancy. Call me crazy, but I kinda liked being pregnant. I felt healthy and I liked feeling my baby tumble around in my big belly. 39 weeks later, with just 10 minutes of being in the delivery room, Enceladus entered the world in a rush.

18 months later we decided that we wanted to give Enceladus a little sibling that she could play with (and boss around). We figured it would be relatively easy to get pregnant again. After all, the first time around went so smooth. But we were wrong. It hasn’t been easy. It’s been full of blood tests, unanswered questions and tears.

We’ve had 3 miscarriages this year, in the span of 10 months. In January I had the first. We cancelled a family ski trip because I was distraught and in pain. In June, I discovered I was having my 2nd miscarriage during a Upstate trip to celebrate Enceladus’s 2nd birthday. In October, I had my 3rd miscarriage – this one I was positive was going to be ok.

The first miscarriage in January came around 6 weeks. I started bleeding, getting crampy and I pretty much knew what was happening. A phone call with a nurse confirmed I was having a misscarriage. She didn’t seem alarmed, said it happens, and told me there was no reason to come to the office. Since I was early on, it would flush itself out naturally. Great.

In June, I started bleeding on a family trip. I told myself that maybe it was normal to bleeding like this. Then it got heavier, and I pretty much knew was happening. This was around 7 weeks. I went in for my 8 week ultrasound knowing there was a 99% chance this wasn’t going to be a good appointment, but I still had that 1% hope. That’s the thing with miscarriages, you still always have that pinch of hope. Well, a quick internal ultrasound and a sad look by my Doctor told me everything. The baby was no longer even there.

After 2 miscarriages, the Doctor had me do an endless set of blood tests. There were so many blood tests, sometimes they called me in for extra ones because the lab didn’t have enough blood to run them all. It wasn’t fun. Then I got an ultrasound – external and internal – also not fun.

The good news, everything looked good. There was nothing alarming with the blood test results and everything under the hood looked a’ok.

The bad news, then why did I have 2 back to back miscarriages? Did anyone have answers for why this was happening?
The doctor cleared us to try again when we felt up for it. We felt up for it. We wanted another baby. So we waited for my cycle to become regular again.

Btw, here’s the thing that no one ever tells you about miscarriages. They mess up your cycle dramatically. You bleed for weeks. It’s painful. There’s so much blood. Then you get your period (finally) and you bleed again, for longer than usual. Everything you think you know about your body changes. It’s frustrating.

So we tried again. Come September, thought I was getting my period (always discouraging when you’re trying to get pregnant), but the bleeding was very light, and I started to feel some familiar tingles in my lower belly. One day, feeling like this might not actually be my period, I took a pregnancy strip test. Positive. I took one a few hours later. The line was darker. Pregnant.  My husband came home from work. I left the tests in the bathroom with a silly note attached. 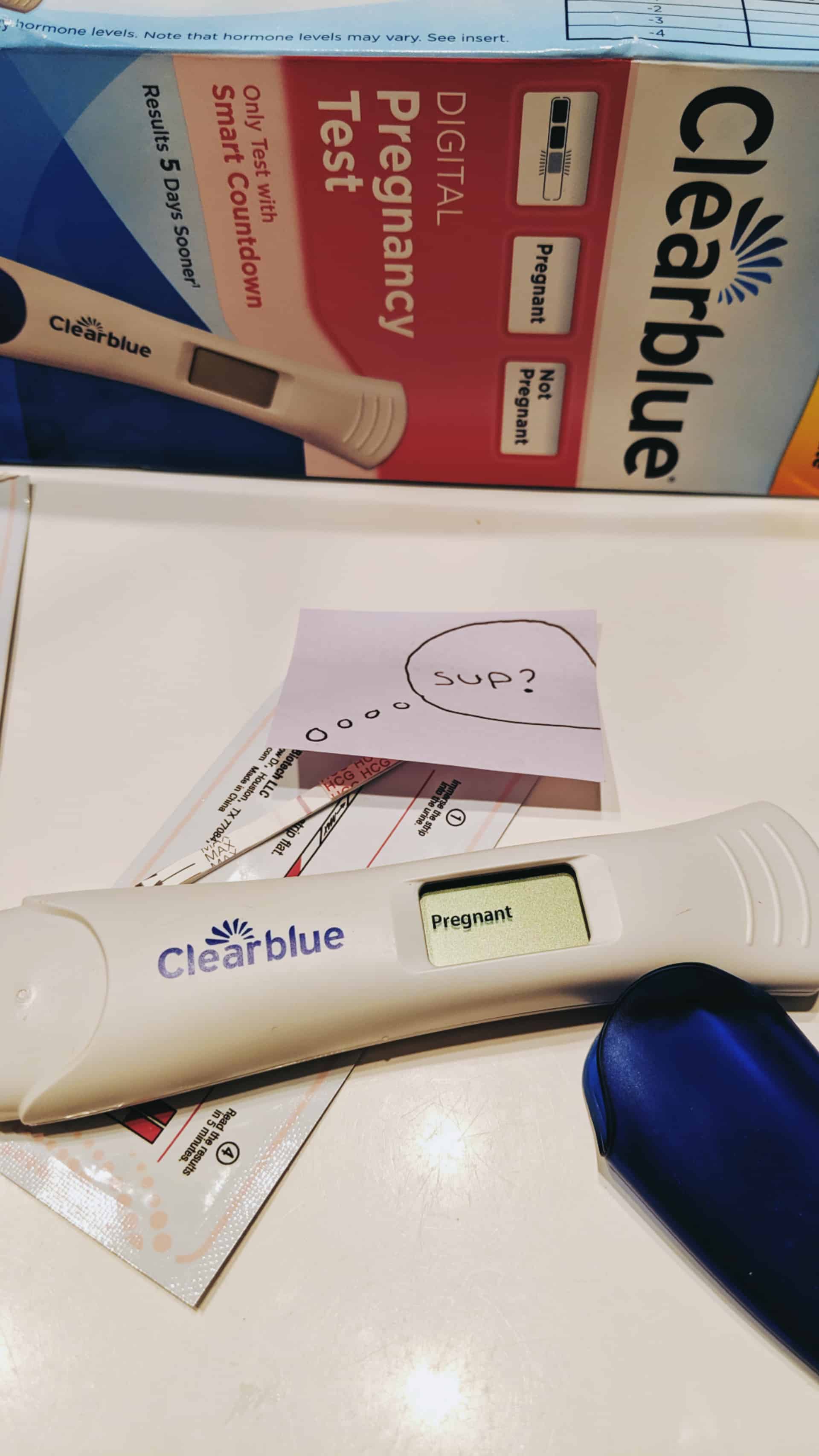 We were happy. We were pregnant again. I was feeling excited. I really thought there’s no way I’m going to have another miscarriage. All the blood tests and ultrasounds came back negative, we must have had bad luck the prior 2 times.

I told Enceladus that Mommy had a baby in her belly. She wondered what this meant and then started talking excitedly about these two new babies (“one girl baby, one boy baby”) that would be sleeping in her room with her. Hold up. I have no idea where she got the idea there were TWO babies. But that’s her imagination creating these stories. I told her I thought it was only going to be 1 baby. She was still excited.

I called the Doctor the day after I got that BFP (that stands for “big fat positive” on Mommy message boards) to make an appointment. As we previously discussed, I would go in for blood work immediately when I got a positive test this time around. She’d be monitoring me from the start. We would not be waiting for that 8 week ultrasound.

On that Monday I went in for my blood tests. I was still feeling good. The Doctor got the results rushed and within a few hours she sent me a message with the subject “good results so far”. I would be going in again on Wednesday for follow up blood tests to make sure that my numbers were increasing. This was the more important of the 2 appointments as it compared the 2 results.

The next day I picked Enceladus up from school. Her teacher pulled me aside and wanted to know if she could ask me something. Oh no, what did Enceladus do? She said that she told the class today that her belly was hurting and that Enceladus exclaimed to her “My Mommy has a baby in her belly!”. I laughed. I was NOT expecting my daughter’s preschool teacher to be the first person to know. I told her I was. She was happy. I was happy.

On Wednesday I went in for the followup blood tests, and then ran a bunch of errands that had to be done. There was no quick message from the Doctor that day. My husband got home from work late that night and asked what the results were, I told him I didn’t know yet.

Thursday came, that morning I didn’t hear anything. I was planning on going to a cooking event that evening so I took a quick shower in the afternoon. After showering, I glanced at my email. I saw a message from the Doctor. The subject only said “lab results”. There was no “good” included like the first one. I clicked the message, and quickly scanned it, heart racing. The only thing that I quickly saw were capital letters saying “I’M SO SORRY”.

Heart break. Another miscarriage. The hCG levels and progesterone levels were decreasing from Monday’s numbers. This was an early chemical pregnancy. I was 5 weeks. Miscarriage number 3.

I called my husband. He said when he saw my name light up on the phone, he already knew. I cried. I laid in bed, the cats knowing I was sad, cuddled on both sides of me. I told Matthew to bring me a donut home. Hey, comfort eating really does work.

That evening I told Enceladus that the baby was no longer in my belly. I told her it got sick and had to go bye bye. She looked at me and then nodded her head telling me the “baby went bye bye down the street, baby was sick, but Mommy ok and happy”. Her innocence was what I needed. I hugged her and kissed her. I kept hugging her. She told me she wanted to go play with her toys. Hah.

So here I am, the day after, writing this because I don’t know how to feel. I mean, I know how to feel. I am sad. I’m crampy. I started to bleed this morning. But I’m also cried out. It feels weird to go about your normal day activities when you’re going through a miscarriage, not to mention the 3rd one in 10 months. One half of me feels hopeless, the other half of me still feels positive. It’s complicated. Geeze, why am I still positive?

But here’s the problem. We still don’t know what’s causing the miscarriages. I have an appointment with the Doctor next week to discuss next steps. She thinks it could be caused by progesterone levels, so we’ll discuss what that means.

You might be wondering why I chose to write publicly about this? That’s easy. Sharing is knowledge and knowledge is power and power is love. I share to educate. I share to give hope. I share to let others know “I hear you, I can relate, and I know, this really really sucks.” I share to support.  Miscarriages are common, although 3 isn’t extremely common, they happen to healthy women.  It’s not your fault.  I need to keep repeating that to myself.  Pamela, it’s not your fault.

I’ll try to keep this post updated, but if you have any positive stories, I would absolutely love to hear them because that’s what I need to hear right now. I’ve been Googling like a wild woman, trying to find some hope from other women who’ve dealt with similar situations. Please leave a comment, find me on Instagram or send me a personal email. I welcome it all.

For now though, it’s time for me to go. Enceladus is on her way home from school and I can’t wait for my afternoon hug.

UPDATE 9/20: This story has a happy ending.  Stay positive you guys!