Let me introduce you to PHIN & PHEBES Ice Cream,  better known as your future bff.

I first learned about this new ice cream at NYU’s Women’s Entrepreneur Festival.  We were ready to sit down to hear a investor panel talk and suddenly one of the girls at my table asked me if I tried the ice cream.  What, there’s ice cream?  Turns out I got in the line for “cookies only”, not “cookies and ice cream”.  So I jumped back up, ran to the ice cream line and got 2 nice scoops of creamy ice cream.  Then my ice cream loving heart was changed forever. 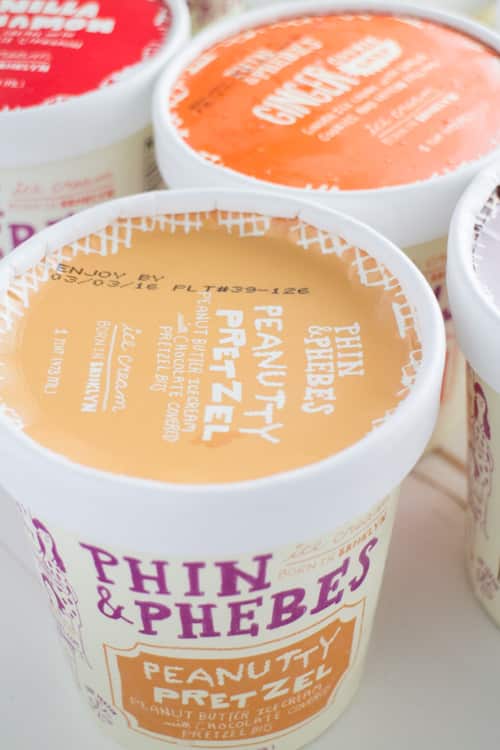 The next day I contacted PHIN & PHEBES to tell them they were making the best ice cream I ever tasted in my life.    Sometimes people can exaggerate when they say “This is the best (insert food) I ever tasted!” but I’m being 100% honest here that this is “da bomb” (do they still say that?).   The ice cream comes in multiple flavors, all of which I’m reviewing below.

But first, a little about these awesome ice cream making ladies.   Phin & Phebes (pronounced “Fin” and “Feebes”) make ice cream in Brooklyn, New York. They make unique and interesting flavors with a little something for everyone. All of their flavors start out in their home kitchen and then they produce them on a larger scale to share with you!  Their philosophy about ice cream is simple: it should be fun for adults and kids, unpretentious, delicious (of course) and surprising in the best way possible.

They made their  first batch of ice cream in February of 2010 when looking for a yummy wintertime hobby. They brainstormed a flavor that was inspired by the Ritz cracker sandwiches filled with marshmallow and peanut butter that they loved as kids. They cranked it up a notch though and covered these in caramel and chocolate and broke them up into a sweet cream base. The results? “Fluffnut” ice cream, their first flavor and also now the name of their dog.

No more waiting, let’s get to the ice cream!

Peanutty Pretzel
Story:  For this ice cream, Phin & Phebes thought about making an ice cream based on a flavor that everyone would know and love, but make it even better! Of course the flavor that came to mind was peanut butter. Once they decided on peanut butter they thought of what other ingredient that would pair with it well. That ingredient turned out to be chocolate covered pretzels. Phin & Phebes refer to this ice cream as their “most American Flavor”. This is a flavor that anyone can relate to and enjoy.

“Some things are just meant to be together. We combined creamy peanut butter ice cream with slightly salty pretzels covered in chocolate to form the Bermuda Triangle of ice cream flavors.

Thoughts: AMAZING, in my top 3.  Matthew’s favorite hands down.   I had to take photos of these ice creams so they were sitting in my freezer for a few days teasing Matthew.  Every night he asked if it was time to eat this ice cream.  It’s a winner. 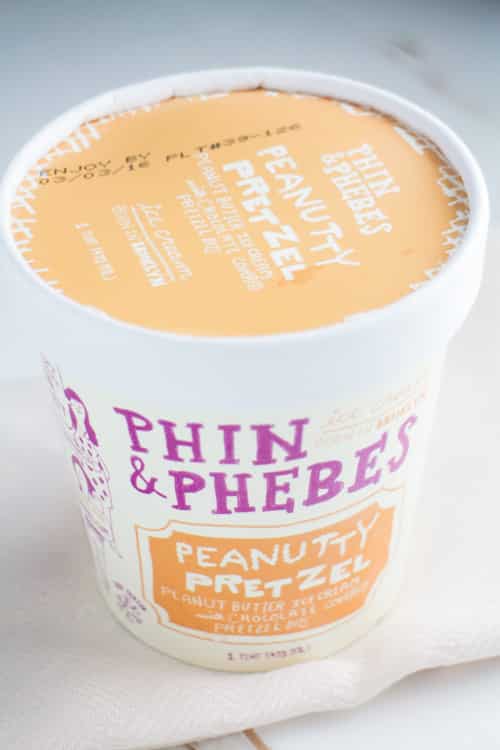 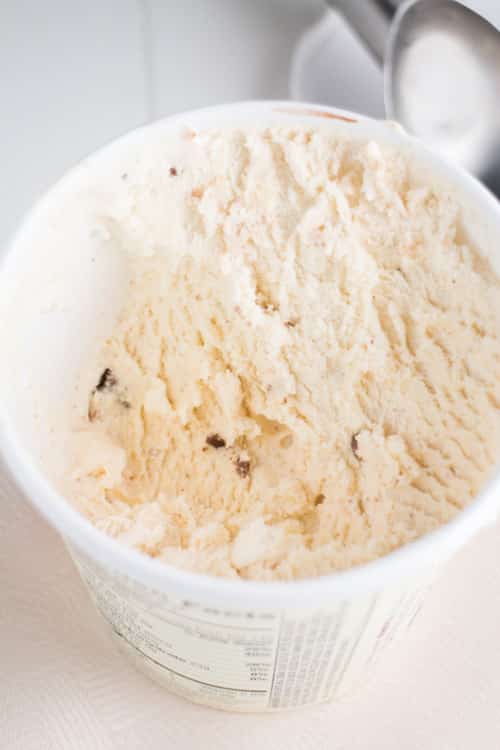 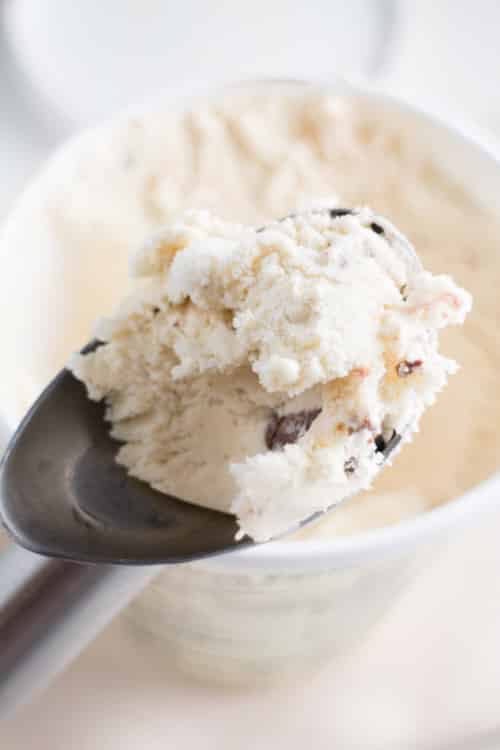 Dark Chocolate Salty Caramel
Story:  This ice cream was introduced alongside Peanutty Pretzel. In the beginning it was almost impossible to make a chocolate flavor ice cream, but the business just couldn’t exist without it. With the inspiration from one of their favorite restaurants Marlow & Sons who made the most amazing caramel tart. But it was more than that. It had a strong touch of salt that just really made the flavors pop.

“The mystery of the Universe unravel with every bit of this dark chocolate ice cream sprinkled with salty caramel to form an outrageously rich and delicious treat!” 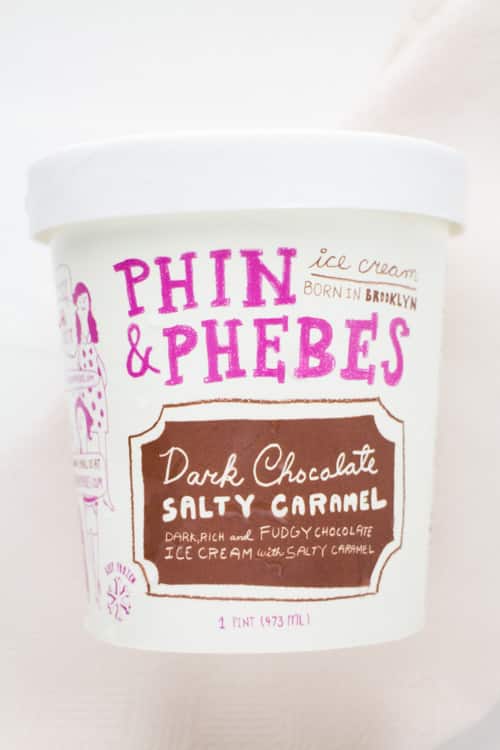 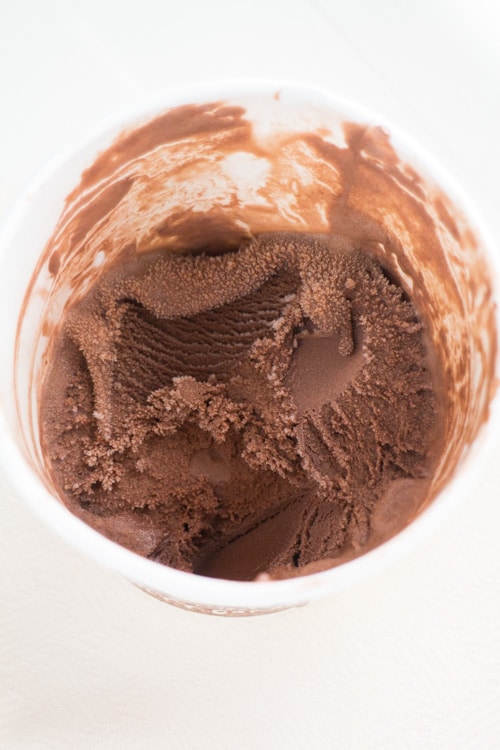 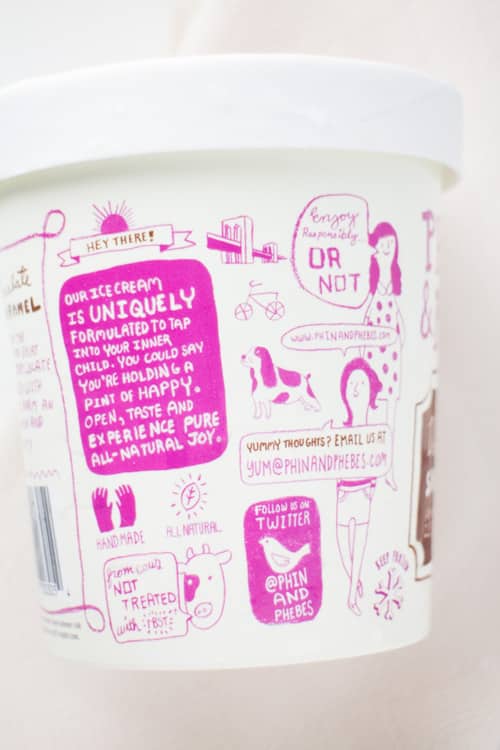 Vanilla Cinnamon
Story: This ice cream is definitely the most “traditional” tasting. Phin & Phebes wanted a flavor that was more relatable, and with vanilla being the number one selling ice cream, they thought to make their own! They decided to add cinnamon to the mix, but not just any cinnamon… Extra Fancy Vietnamese Cinnamon or “Saigon” Cinnamon.

“We wanted to make a vanilla ice cream that was, well… not so “vanilla”. The Extra Fancy Vietnamese Cinnamon in this two-fold bourbon vanilla ice cream steals the show. Enjoy by the spoonful or with an espresso or on top of warm apple pie and call it a day.”

Thoughts: This rounds out my top 3.  I love the twist of cinnamon + vanilla, it’s comforting and would be perfect on a piece of warm pie! 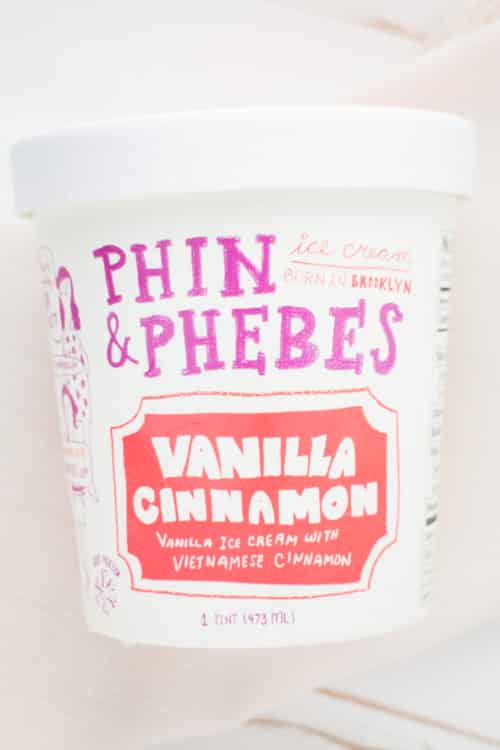 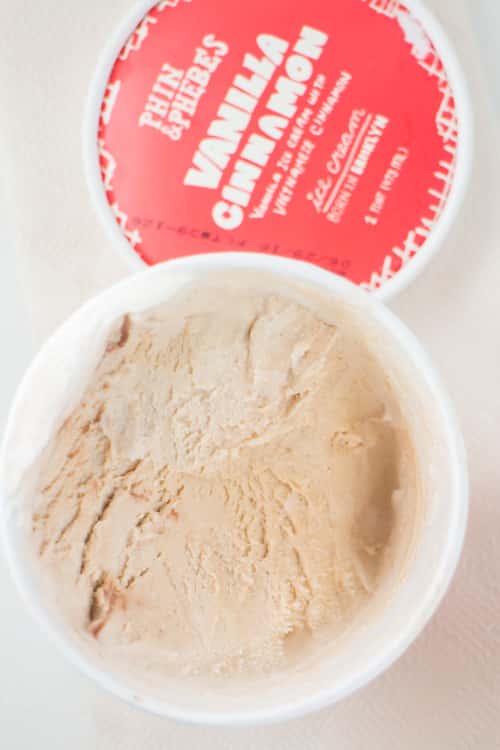 Vietnamese Iced Coffee
Story:  The summer before the first pint of ice cream was ever sold from Phin & Phebes, the girls lived in an apartment right next to a Vietnamese sandwich shop, and it sold the girls’ favorite iced coffee that they drank almost every day that summer. One summer day while drinking them, they decided that it had to be an ice cream! Vietnamese Iced coffee is traditionally made with coarsely ground chicory coffee or Vietnamese-grown dar roast coffee individually brewed with a small metal French drip filter into a cup that has about a quarter to a half as much sweetened condensed milk, stirred and poured over ice. This ice cream doesn’t use sweetened condensed milk, but instead, vanilla extract, chicory root coffee and as a twist – cardamom.

“What’s better than coffee ice cream? Vietnamese coffee ice cream! We took one of our favorite summertime treats and turned it into an ice cream flavor so you can enjoy it all year round. We make this flavor with a blend of regular coffee and chicory coffee and a hint of cardamom to make your mouth sing.”

Thoughts:  Cardamom in ice cream? Mind blown! I’m not even a coffee lover but I love this. 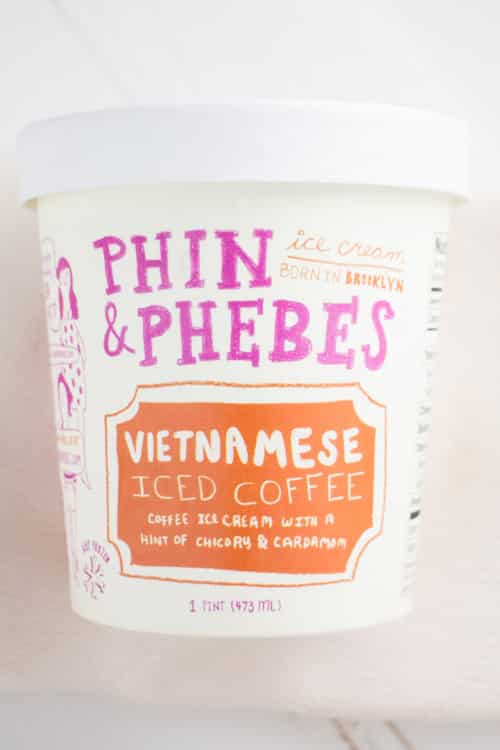 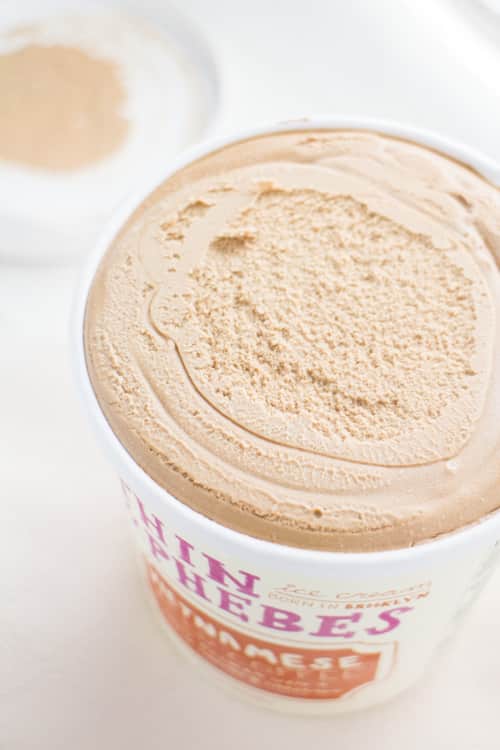 Ginger Cookie Snap
Story: This ice cream was inspired by a company that made Ginger Syrup that Phin & Phebes were friends with. They wanted to use the flavors of the syrup to make the best ginger ice cream possible. With the help of Ginger cookies with lemon icing filling, they concocted this ice cream. You’ll taste these cookie bits with every spoonful, along with the ginger flavor!

“Ginger lovers unite. We make this flavor by simply adding juiced ginger to the base and combing that with ginger cookies with a lemon-icing filling. It’s a creamy ice cream exploding with yummy ginger goodness.”

Thoughts: Smells just like fresh ginger, yum.  The ginger cookies add a nice crunch to make this a hit of a ice cream. 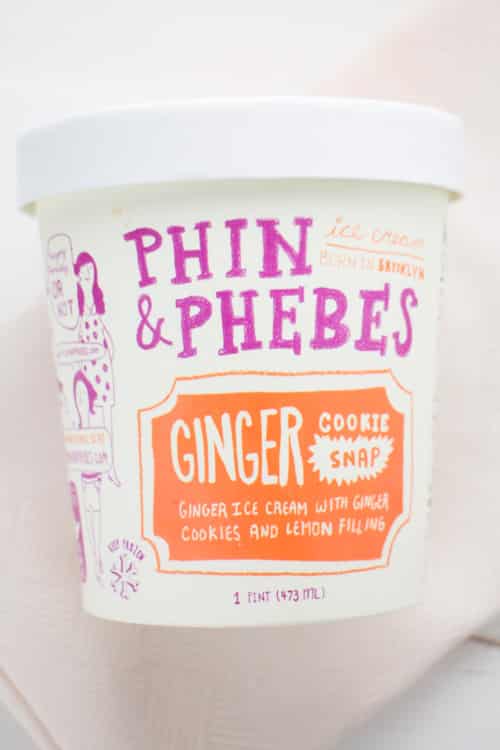 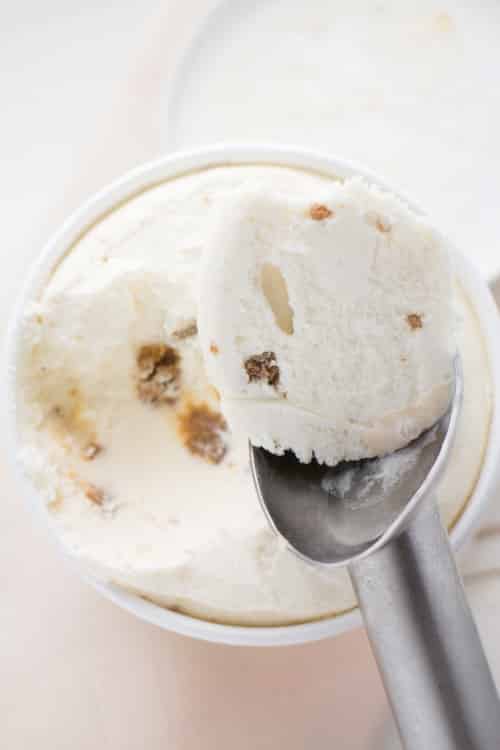 “We’ve taken a Southern classic a cream coconut and key lime concoction that you’re sure to love. This flavor has hints of tang and graham cracker chunks making you want bite after bite.”

Thoughts: If you love coconut, you’re going to love this ice cream.  When you think it can’t get any better, they add in graham cracker cookies. 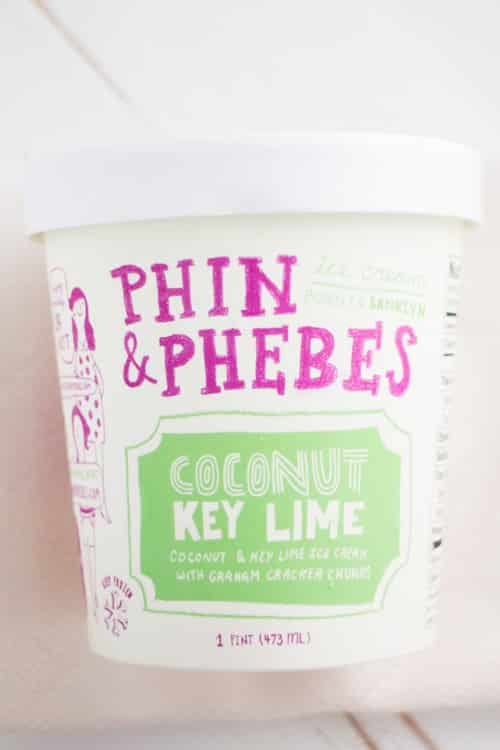 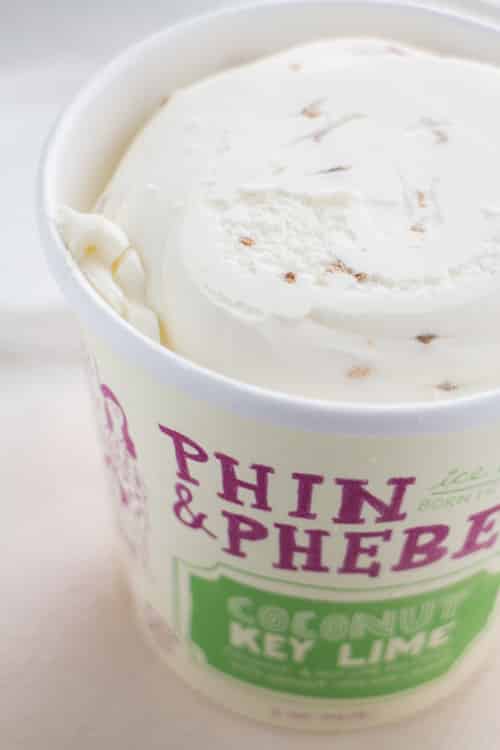 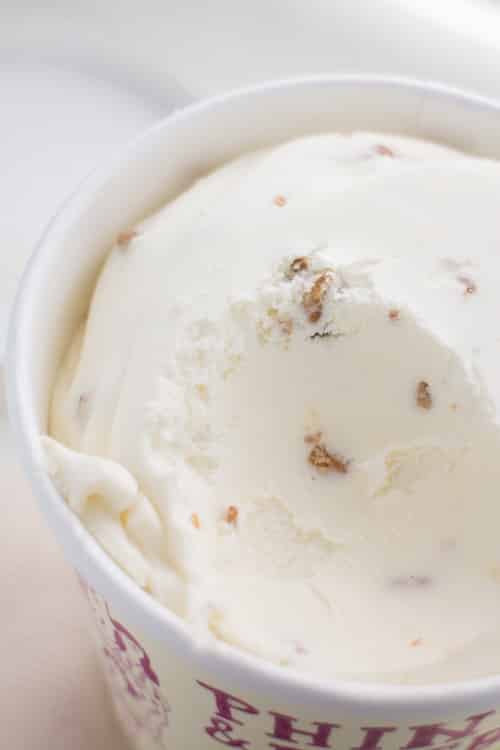 Banana Whama
Story: This ice cream is firstly inspired again by Crista’s Southern Heritage and by the girls making homemade banana pudding. Once the banana pudding was made they would add it to a sweet cream base and freeze it.

“A mind bending baba pudding flavor that will bring unknown measure of joy to your taste buds. This is quite simply, banana pudding ice cream form with chunks of vanilla wafers.”

Thoughts:  If you love banana flavored things you’re going to go crazy for this.  As soon as you open the lid it’s like a banana fairy land filled with unicorns and vanilla wafers.  Ok, not unicorns, but you get the point. 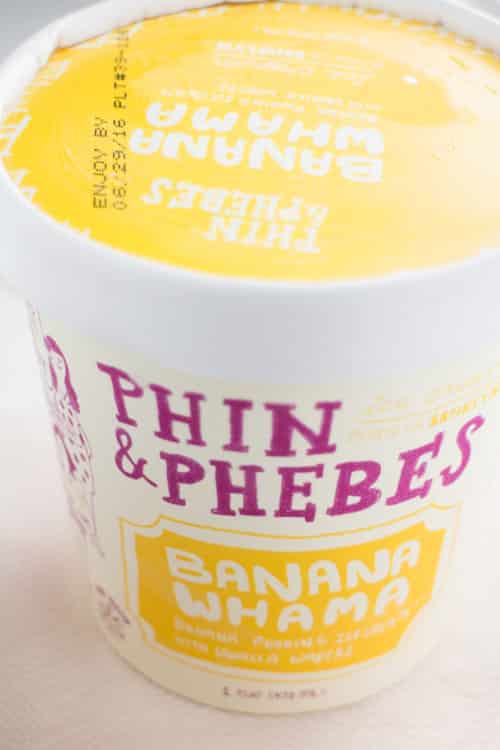 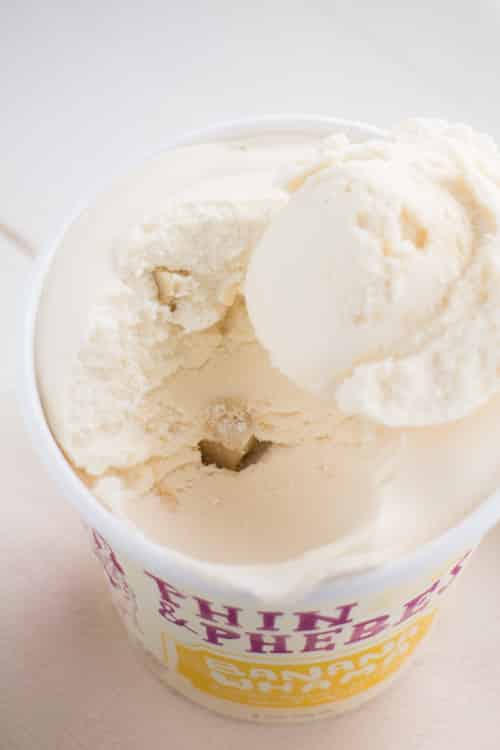 You can find a list of stores to buy it at here.  If you’re able to find it, please buy it and give it a taste!  Let me know which one ends up being you favorite! 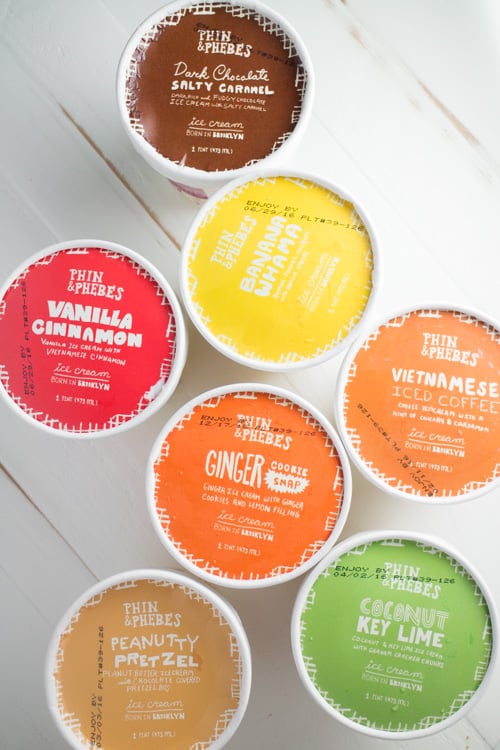 Grab your scooper and dive in! 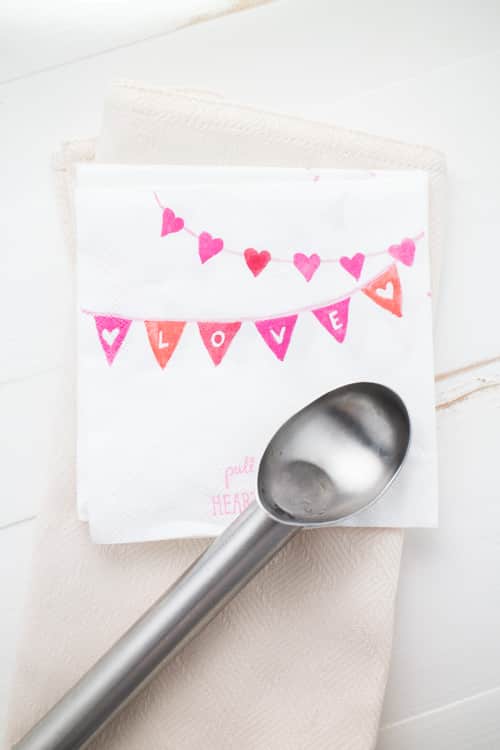