Homemade Chinese Wonton Soup recipe that’s authentic and easy to make! The wontons are made from scratch and the dumplings are filled with pork. It tastes just like your favorirte Chinese restaurant soup but much more healthy for you!

I met Matthew during my first few weeks at Art School in Pittsburgh in 2002.   Months later, we were dating.  Months after that, we moved in (with Essy!).   15 years later, we’ve changed locations, added a few furry and human children to the family, and are still doing out art together.  What else do we do together?  We cook in the kitchen. 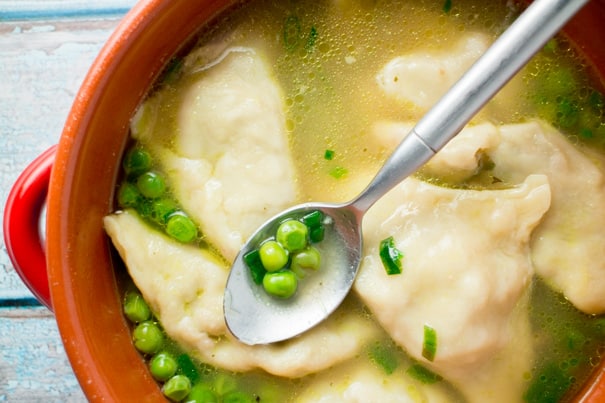 I would say that I cook the majority of the meals that we eat for dinner, but once in a while Matthew cooks up dinner and it’s always delicious.   One recipe he’s really into and made it his goal to perfect was homemade wonton soup.

Wonton soup is a favorite of ours and is one of the most popular things we order from Chinese takeout (besides chicken and broccoli!), but we wanted to make it ourselves, including making the wontons from scratch. 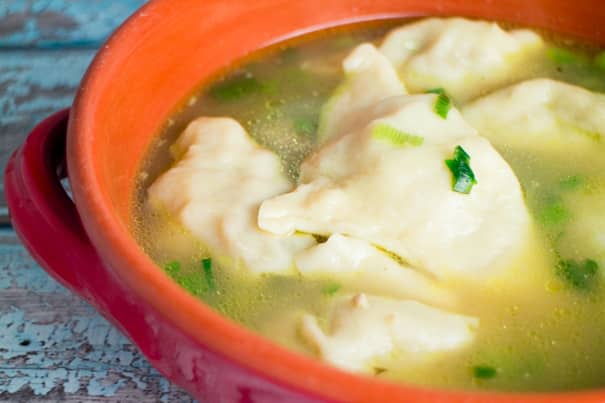 Matthew was on a wonton kick for a few weeks, where he spent many nights in the kitchen rolling dough and trying different filler contents to add to the wontons.    I have to say this recipe is the real deal and it receives a 10/10 on the “I Love You!” scale.

Also, it tastes JUST LIKE the Chinese restaraunt – but so much more healthier because it’s homemade!

The wontons are a pretty simple recipe consisting of basics: flour, egg, salt and water.     Once the dough is made, you’ll want to give it about an hour to rest to make it easier to roll out. 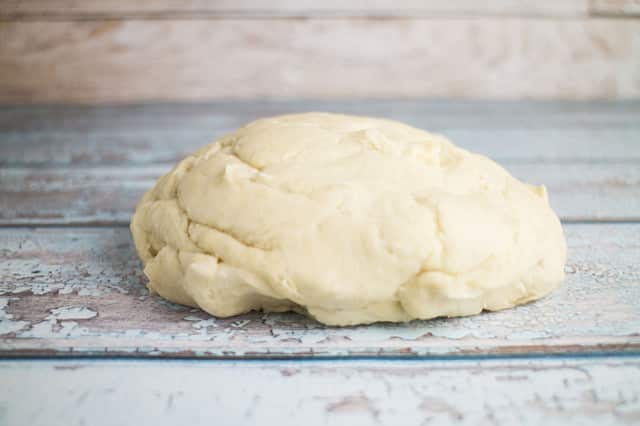 You want the dough to be pretty flexible, so if you pull it apart it should stretch pretty easily. 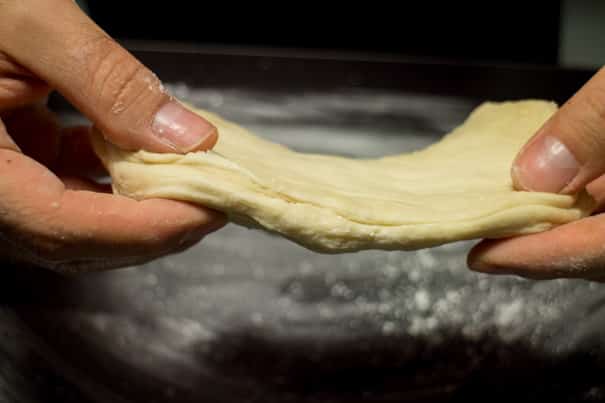 Then you will start to roll the dough out (as thin as possible) and cut it up into wonton wrappers.  Using cornstarch on your surface will make sure the dough doesn’t stick to the counter top. 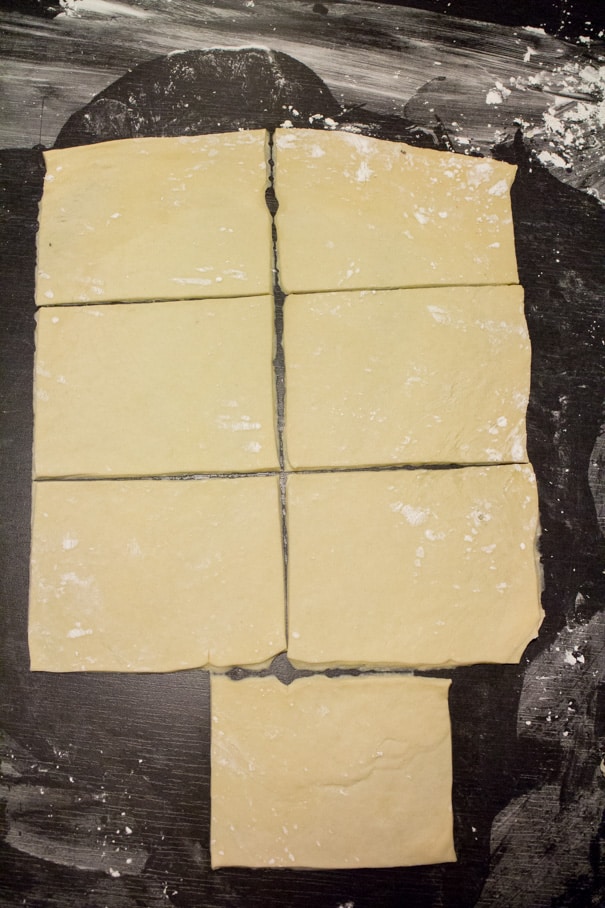 How to Make Wonton Soup

After that, you’ll start to fill it with your pork.  If you’re anything like me you will ask for this to be poured into your mouth right now as well. 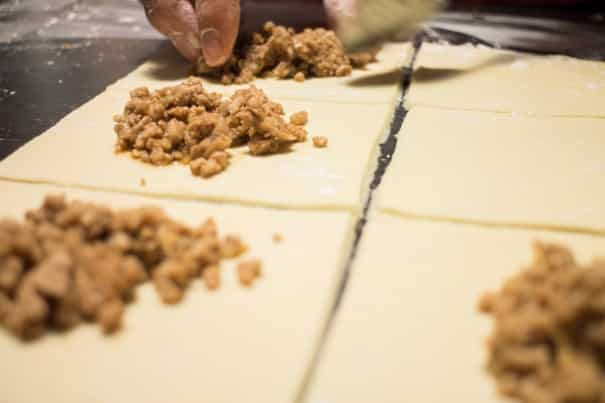 Then you’ll fold and close each wonton.  I asked Matthew for some tips and he told me “don’t freak out when the dough starts to rupture when folding, just be patient”. 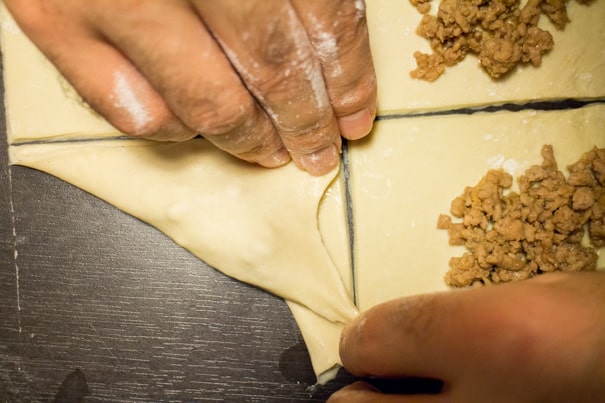 Now your wontons are ready to go!  You can throw them right in the soup to cook, or you can freeze them for dinner later on.  It’s up to you. 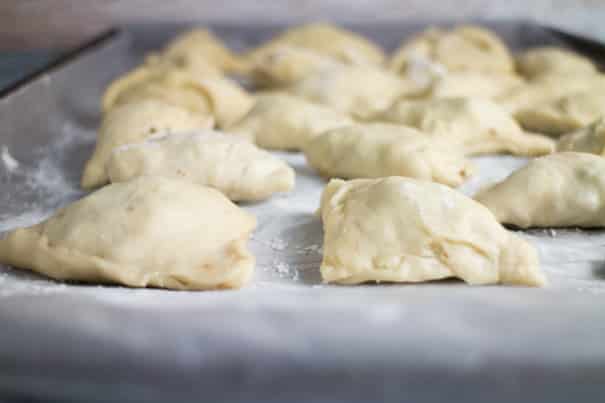 We always like to add vegetables whenever possible so we throw in some frozen peas and fresh scallions into the soup.  It’s just perfectly delicious! 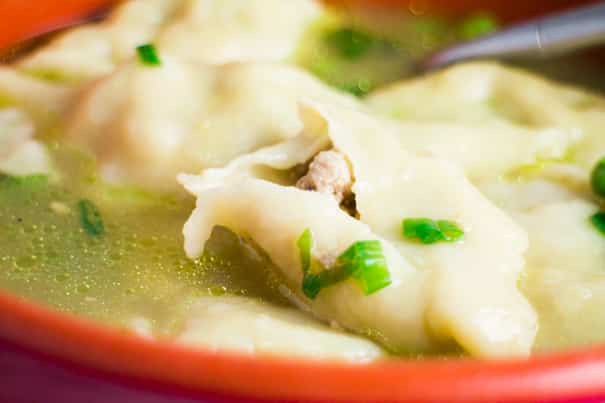 And when Dinner is ready… you will love this Homemade Chinese Wonton Soup recipe! 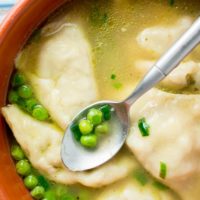 Print
Homemade Chinese Wonton Soup recipe that's authentic and easy to make! The wontons are made from scratch and the dumplings are filled with pork. It tastes just like your favorirte Chinese restaurant soup but much more healthy for you!
serves 4

Course:Main Course, Soup
Cuisine:Chinese
Did you make this?I love seeing what you’ve made! Tag me on Instagram at @BrooklynFarmGirl and don’t forget to leave a comment & rating below.