You know why I love having a garden? Because it’s January, feels like 22 degrees out and I can look in my freezer, grab some frozen soy beans I preserved a few months ago and have fresh edamame in a few minutes. It feels like summer now! Minus the 3 pairs of socks I have on and that I’m sitting in front of a heater. 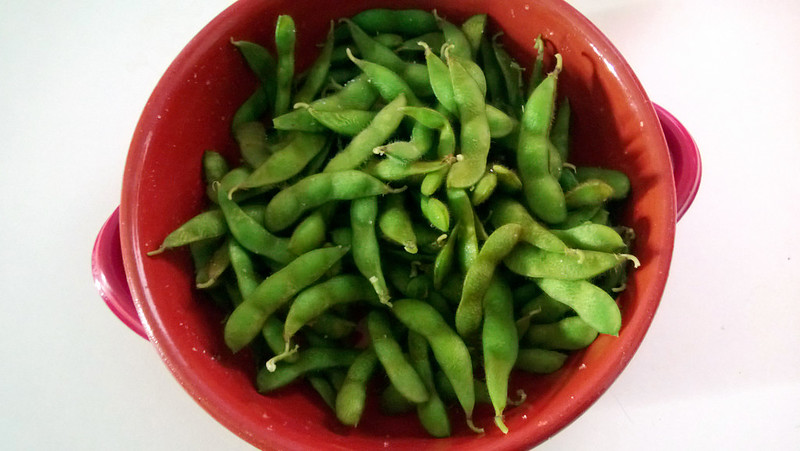 In just a few weeks the 2013 garden will be started.  We will start plotting the outline, and then seeds will be started inside.  This year we’re going to move some of the boxes around, try a few new vegetables, not grow some and continue to glare at the person who constantly shuts off our hose in the laundry room.

Here is a table on what we’re hoping to grow this year..
Yes Will Grow: The usuals, vegetables we have grown before.
New First Time: New vegetables we want to try growing.
No Won’t Grow: Grew them, but decided not to this year.

The yes column is pretty self explanatory.    These are the usual cast of characters and have grown successfully on the roof.
New this year we’d like to try Brussels Sprouts, lettuce and pickling cucumbers from seed.  Last year we had lettuce but it wasn’t from seed.  Also, we had success last year with regular cucumbers but I want pickling cukes so we will try Kirby cucumbers. I’m obsessed with Brussels Sprouts so that is understandable.
There are a few plants that we have grown but most likely won’t grow this year.  The red beans grew amazing and looked like tentacles, but we would rather green beans.  The spinach was successful as well but besides cupcakes we really don’t eat it.  Lastly, our luck with potatoes has been good and bad.  Some years they grow great, some years the heat kills them.  For the amount of soil they need, and how cheap they are to actually buy in the store (compared to the price of seed potatoes) it might be most economical to just not grow them this year (even though this breaks my heart).  Also this year I really don’t want to grow flowers unless they’re Rhododendrons or varieties like this.  Growing flowers just doesn’t excite me as much as growing a pumpkin.