I’ve been promising to start posting more of what I do outside of gardening and cooking, so here I am with a Behind The Scenes of a recent project we did.    If you guys dig this new feature, let me know  in the comments as I’d love to start documenting and sharing more of our work!

For this post here we’re going to look at a recent fashion shoot we did for V Magazine.    You can see the final project on our website as well as V Magazine’s website.

We’ve been working with V Magazine for years now and they were one of the first believers in showing moving images and videos for fashion content.  They really let us do our thing and be creative so it’s always fun working on a project for them.    For this shoot our goal was to do a project that focused on 3D scans.  We wanted to shoot the model as is on a regular background and then have her avatar, a 3D scan of herself, next to her.   After some testing on ourselves we figured out what was the best software to use along side the Microsoft Kinect which we’d be using for scanning.

Here’s some tests we made in the very beginning to test matching the motion.  One of the most difficult things you can do in 3D animation is to move the camera. Once you move the camera all the angles change and the eye can very quickly pick up if things are “off”. Match Motion is the process of tracking camera movement and solving the camera so that any CGI elements match your video footage.  In this test the video footage of me is shot handheld and then the robots are fake.  The test is to make all angles and motion match up.

This is a test in filling in 3D scans with distortion maps.

First up, let’s talk the set.  Most of our work is digitally created with 3D custom environments we make.  For this though, we wanted to go realistic and shoot the actual background which is what you’d see in the end project. We wanted a hand painted pink canvas and a graphic lined floor to contrast with the 3D scans of the model.

The hardest part about picking paint is comparing the shades, right?  There’s too many to choose from, it’s always so hard.  I think I went back and forth a million times but finally settled on Pink Innocence. 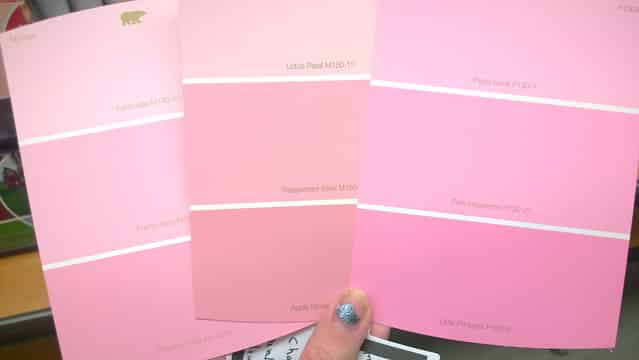 Then just 2 days prior to the shoot the canvas was painted.  We really wanted something that looked classic with the brush strokes still visible on the canvas.   This canvas sucked up the paint and it took quite a lot. 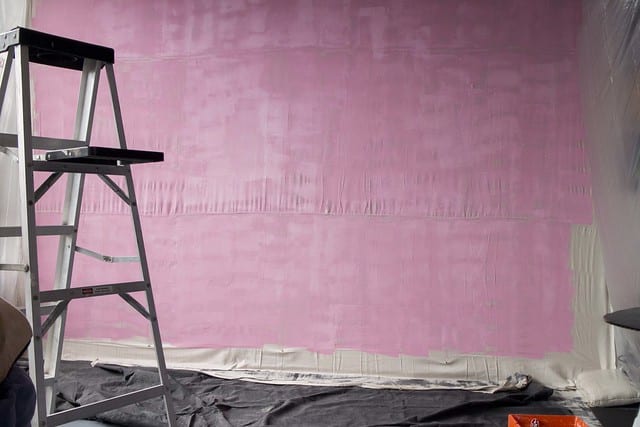 Here’s the backdrop on set along with the grid canvas floor that we made. 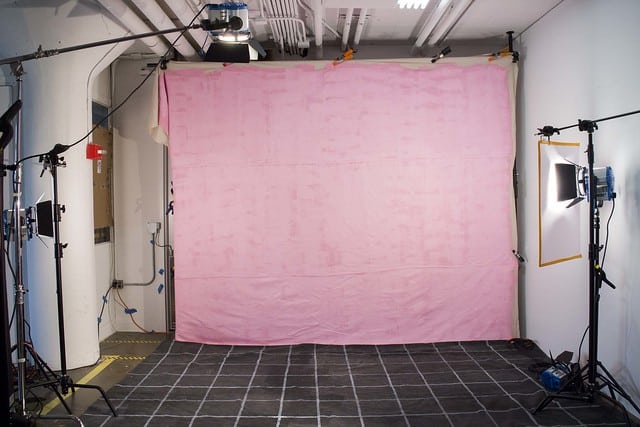 Our model for this project was Niki Hajdu from New York Models.    We worked with her previously the day before on another project and she’s just the bees knees in terms of a awesome girl.   When casting for this shoot we knew the model would have a wig on so you always have to use your imagination on how a model can look and transform.    It was kinda funny because the shoot prior to this was about extreme makeup and this shoot was a wig so the only time we really got to see Niki natural was before and after shoot days! 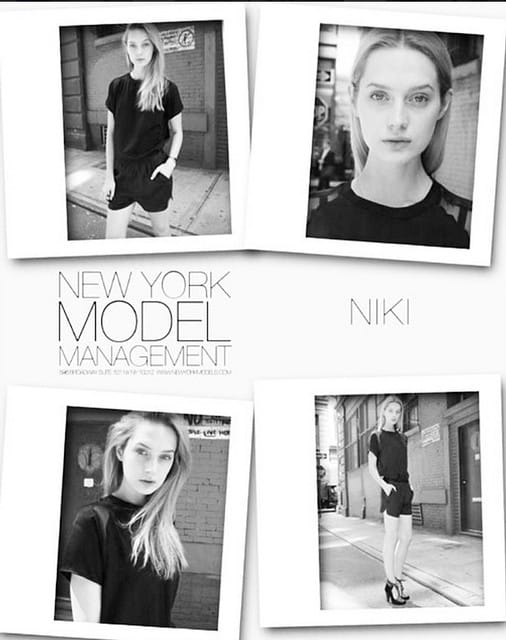 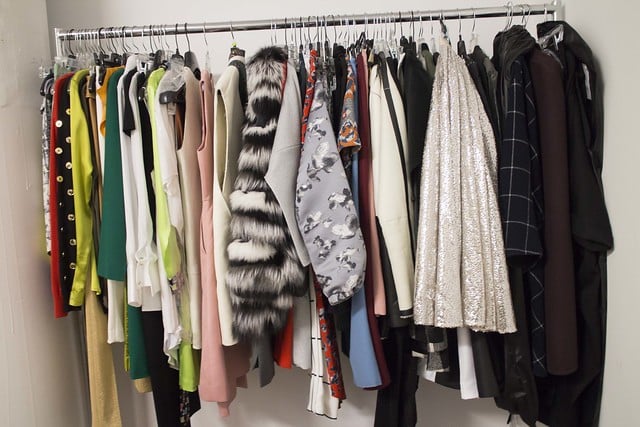 And here’s some of the shoes, there was a very long line of them.  The stylist decided she was going to keep the same shoes throughout this story so only one pair was used. 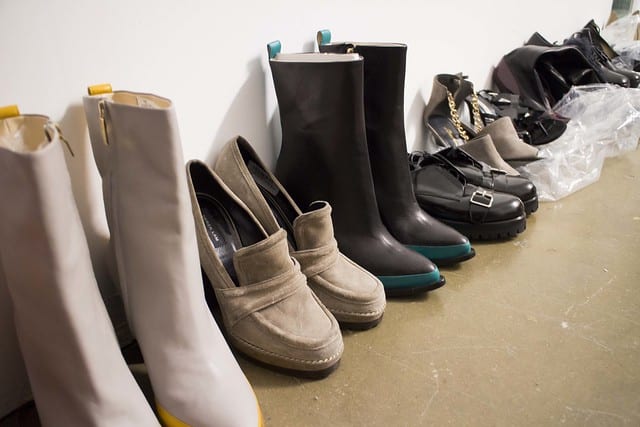 There is usually 2-3 hours from the time everyone arrives on set to the first shot.  This time is used for hair, makeup, styling and for us to set up and test lighting, equipment, etc.  Almost immediately after everyone arrived and the gear started to be placed on set Matthew whimpered over to me and said he hurt his back and couldn’t move.    He must have lifted something or outstretched because for a few minutes he pretty much couldn’t move at all.  Our assistant ran to Duane Reade for some heating pads and icy hot.  In about an hour Matthew was feeling better.   Boy, are we getting old or what?   Guess it looks like we’ll be bringing back braces on set from now on. 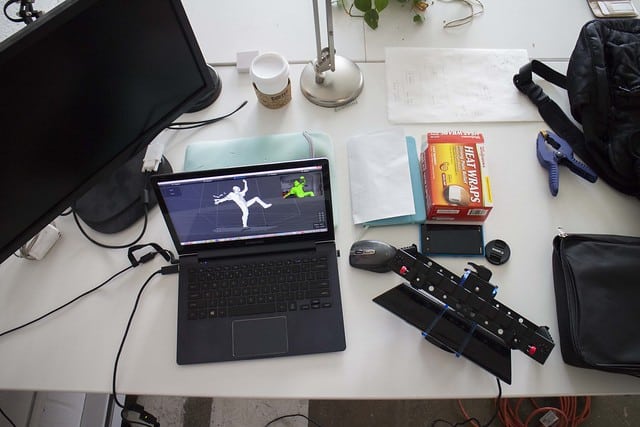 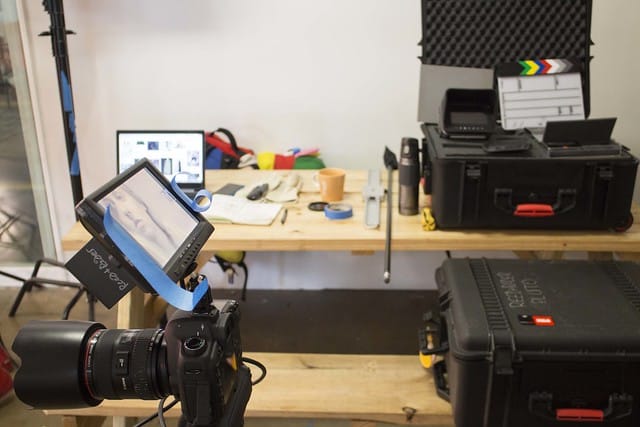 So then the shoot started.  This project here was 6 shots which means 6 different looks.    Because we wanted consistency the makeup and hair pretty much stayed the same throughout the day.  The focus was more on the styling changes and the 3D scans.    After we got the pose down for the regular shot, then we moved on to the 3D scan aspect of the image.  Here’s Matthew scanning Niki who is staying amazingly still. 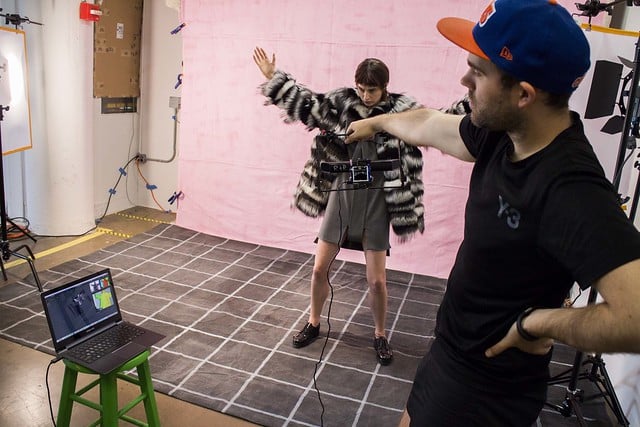 Here’s what we’re seeing on the screen while scanning. 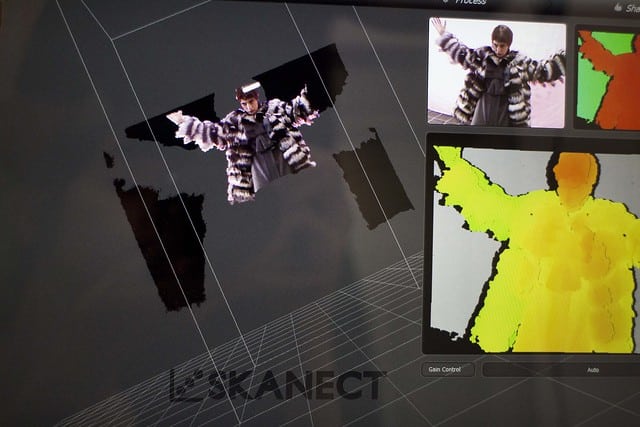 And here we are both scanning.    Some scans are better than others so it’s important to get it right and filled in as much as you can to prevent “holes” in the final 3D scan. 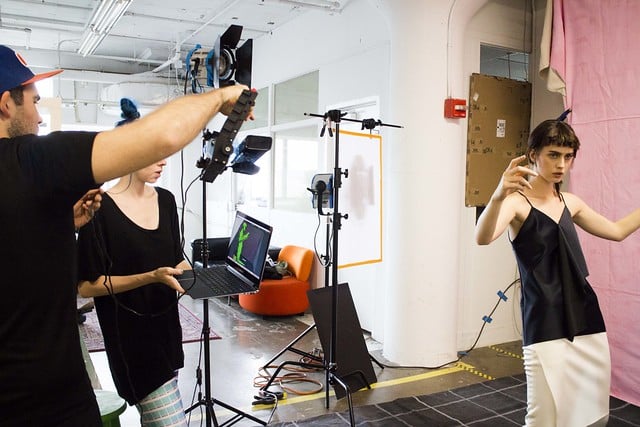 And because I love to dress up I had to try that Viktor & Rolf coat on!  Let’s just say it’s not made for the Summertime. 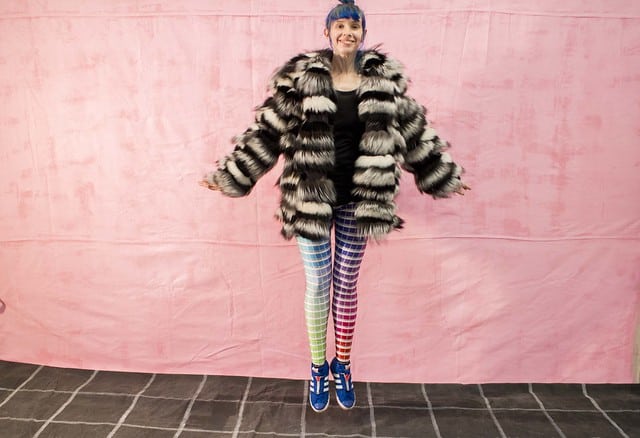 Shoot day in general is always the easiest part of the process.  We spend alot of time in meetings and emailing on pre-production with the team and then we spend a whole lot of time on post production.  Post production is pretty much us sitting on the computer for days, weeks, months putting the images together.  For this project the hardest part was figuring out what the 3D scan would be as we wanted them to move.  This just involved us sitting down, trying a ton of different movement ideas and then finding a happy medium between what works best for each.  During this part we usually come up with new shoot ideas as well.  For example some of the tweaking we did to the scans wasn’t right for this shoot but we loved so much that we have to write it down for future shoot ideas.  The top image below is something I really fell in love with and we’re planning to use on a future project. 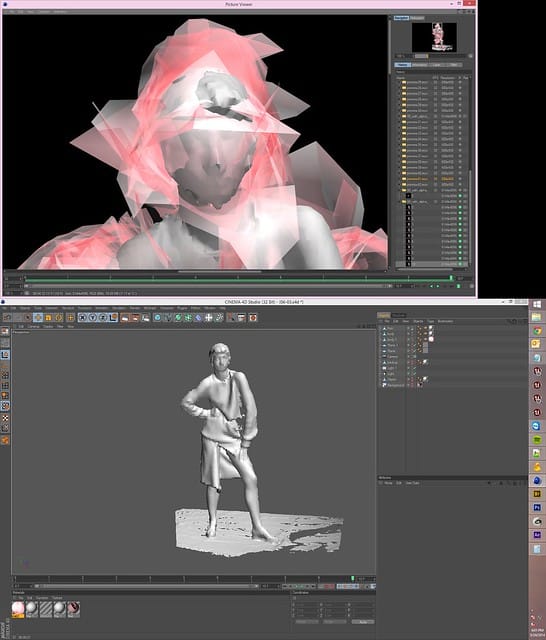 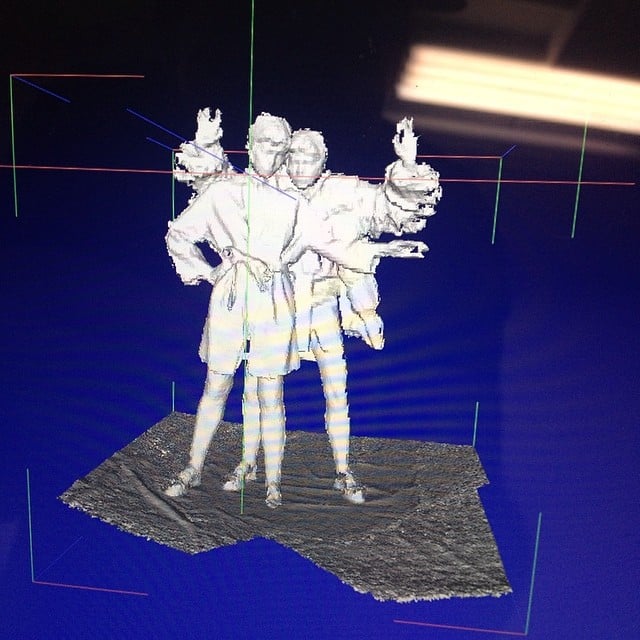 I hope you guys enjoyed this post and seeing the process behind a final project.

Team for this project: