We adopted Brother Bear, our beautiful Maine Coon boy! Watch as he transforms from a angry ringworm kitty to a majestic lap cat!

Can I tell you guys about our loving boy, Brother Bear?  He’s the best.

Almost 6 years ago to the day Matthew rode the subway to the last step in the Bronx.   It’s a long ride there, but there was a treasure there waiting to be brought home.  We were about to adopt Brother and give him a forever home.    We first saw Brother online on a adoption site and fell in love with him.  It didn’t take much persuading to quickly make this a 3 cat home  (at that time it was only Essy and Xanadu).  With vet papers in hand, pink carrier in the other (sorry Brother!), Matthew took the subway back home to Brooklyn where I was waiting for him at the door like the super excited cat lady you all would imagine. 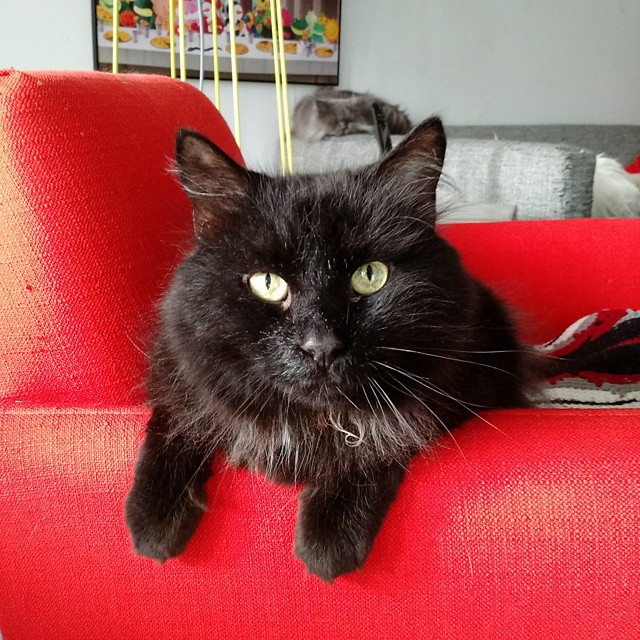 First funny story, the Vet papers called him MIKE.  Seriously, a cat named Mike.  That’s hilarious and horrifying at the same time.  Everytime I look at his papers I laugh.  Mike! Unbelievable.  Thankfully Brother agreed that his name was horrible so he happily approved of Brother (or Brother Bear for his Mom and Dad to call him).

This is the first photo I have of him when he came home.  We immediately took him into the bedroom and locked the door.  He came out of his pet carrier very timid at first and then ran under the bed.    I grabbed a fun jingle ball and started trying to persuade him.  Then I saw this. 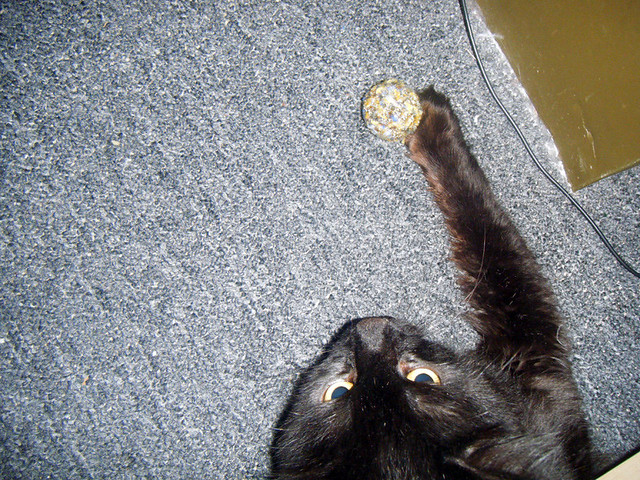 And then I immediately picked him and he did the unthinkable, he socked me right in the mouth.  A big ol punch.  Gosh I was devastated, I might have cried.  But that never happened again.  Brother didn’t grow up in a good home, he might have been out on the street where his timid nature didn’t do well,  as well as the adoption home wasn’t the best.  It was going to take time to turn this angry boy into a love machine.  When we first took him to the vet to get his nails clipped and to get his shots he literally threw the needled across the room, made the vet bleed and needed 3 nurses to hold him down. Eventually they couldn’t even clip his nails – 4 people! I heard them outside the room discussing Brother and they were all too scared of him.    So yeah, he wasn’t a love bug at first.  We needed to show him he was now in a safe home.  6 years later, I single-handedly pick Brother up, sit him on my lap with his feet up in the air, clip his nails, put Soft Paws on him and then give him a nice butt tap when he gets down to show him what a good boy he is.  When he came into the house he was scared and needed to fight to protect himself as he didn’t have our trust, now he’s a purring machine that lets me do anything to him (baths, still not preferred, but I no longer get socked in the jaw).

(Brother at the vet for the first time, before making people bleed, looking for a way out of there) 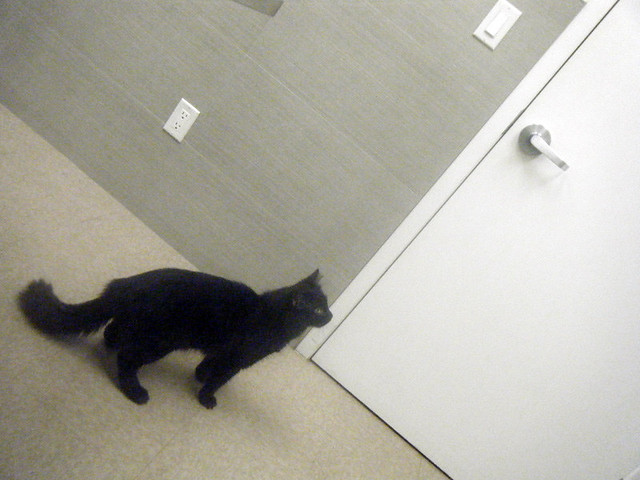 Then after we got him updated with shots, just a few days later we noticed he was getting sick.  His eyes were runny, his nose was starting to turn raw from dry skin and he started to lose his hair. 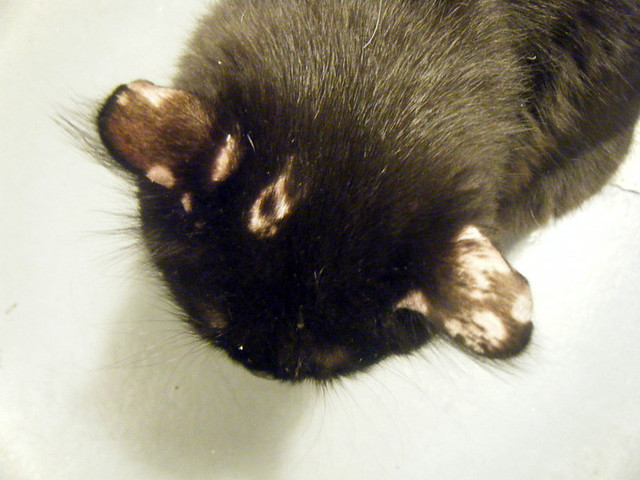 Even though we know what he had, we went to the vet again to get a dignosis.  Yup, Brother got ringworm at the adoption home and it decided to really hit once he came into our home.  If your cat never had ringworm, it’s a nightmare for both the cat and you. First of all, the cat has to be quarantined for months.  It was especially dangerous because Essy was a senior cat and her immune system wasn’t as strong.  So Brother lived in the bedroom for the next 3 months.  We had to tarp the bed when we weren’t sleeping on it.   Matthew slept with him every night in the bedroom, tarp on one side of the bed, Matthew on the other.  I would have slept in the bedroom but Xanadu, our lovable curious Siamese, never sleeps without her Mom. Never.  During night one where I was in the bedroom, Xanadu knocked on that door so hard nearly knocking it in. Finally I gave in and went out into the living room to sleep. No lie, I slept on the floor on the living room for the next 3 months.  Every single night I slept out there with my Xanadu. I’d like to give myself some Cat Mom credit right there.

So back to ringworm, you need to give them medicine orally, you need to rub lotions to their spots that lost hair. And this was just a few weeks after arriving in our home.  Now he was even angrier, scared of us and it was such a procedure to do this to him 2-3 times a day!  I would have to wear giant mitts to try to give him the medicine, he would bite, scratch and do everything he could.  Matthew had to chase him with drops and dive bomb them onto him, while missing him about 90% of the time. We had to buy alot of lotion drops during that time frame.  But eventually I got him into a habit of learning food meant his mom could rub him which meant I could start rubbing lotion on him with my hands.  I ended up getting ringworm on two spots, my belly (no clue how) and my arm.  Matthew got it on his arm too.    Thankfully none of the cats got it because we scrubbed that place down and cleared the air daily.    Now finally the ringworm was gone, Brother was back to being released into the wild in the loft.

And then 3 months later, Brother started to get vocal, he started to spray and he still had a bit anger left in him.  So back to the Vet we went. Guess what now?  Brother was capable of being a Dad and goodness, he was looking for ladies.  That’s right, the vet papers we received when we adopted him were wrong.  He was never neutered!  So that happened next, with a little complication that needed his belly completely shaven. Poor guy, he dealt with so much in a short amount of time but we loved the heck out of him.   Suddenly he started to turn into our little love machine, our little bear.  He started to kiss us, rub against our legs, purr and presenting his belly to us. He finally felt safe. He finally knew we loved him. He finally realized this was his home. 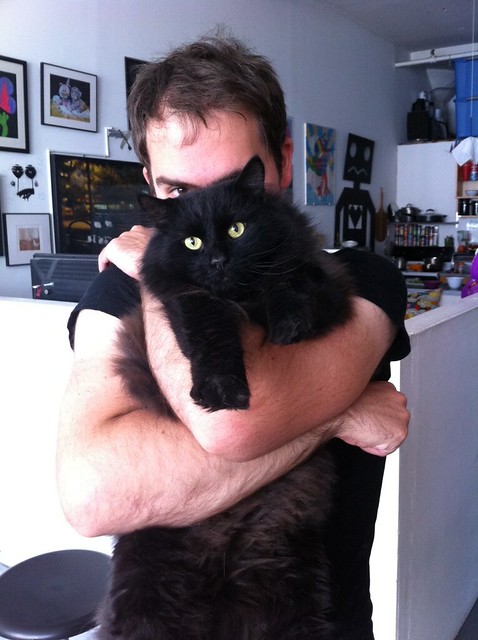 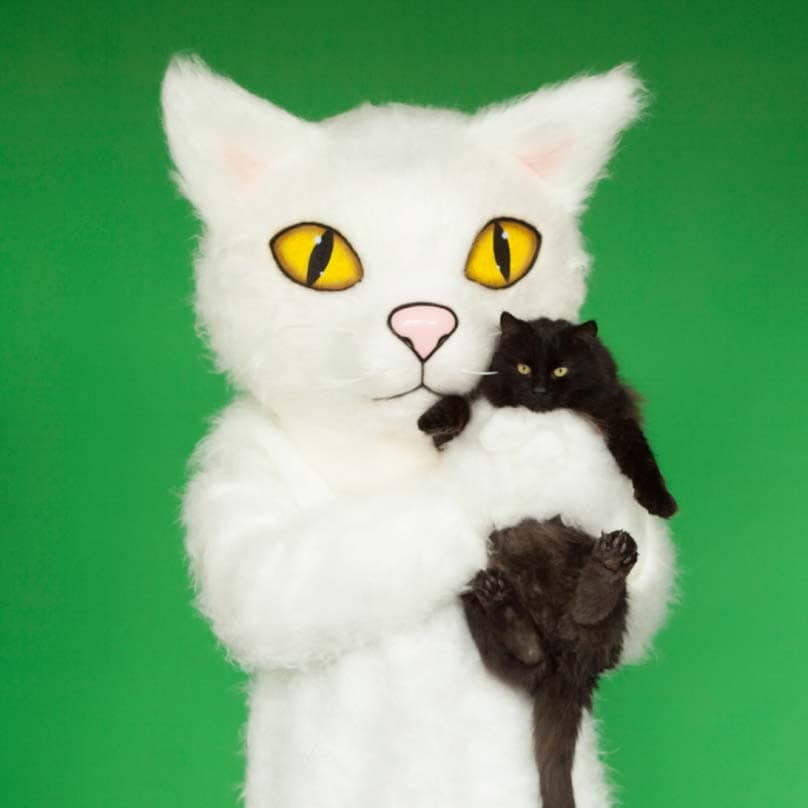 6 years later, Brother is the best boy in the world (I know, you might think yours is, and that’s totally ok, but Brother really is, hehehe).  He kisses, he lets me hug him, he lets me clip his nails, he lets me give him a dry bath with shampoo and towels (no way he’s getting in the sink – real talk).  He’s our little cuddle buddy.  He jumps on the bed, he loves when you rub his belly, he follows me around and he loves Goblin his brother so much.  The sweetest part of Brother is that he went from being a boy that wasn’t too nice to such a softy boy. He’s scared of the rain, thunder, fireworks.  One drop of rain and Brother bear is running for the bedroom.  He’s a sweet gentle boy. 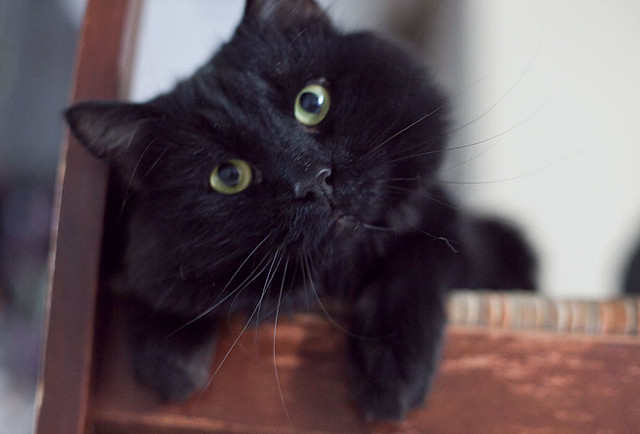 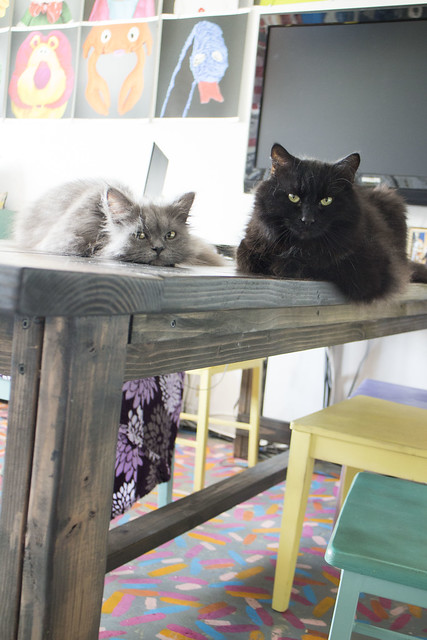 What a ride it’s been to see him changed so much.  I know he loves his home, he feels safe and we couldn’t be more in love with him. 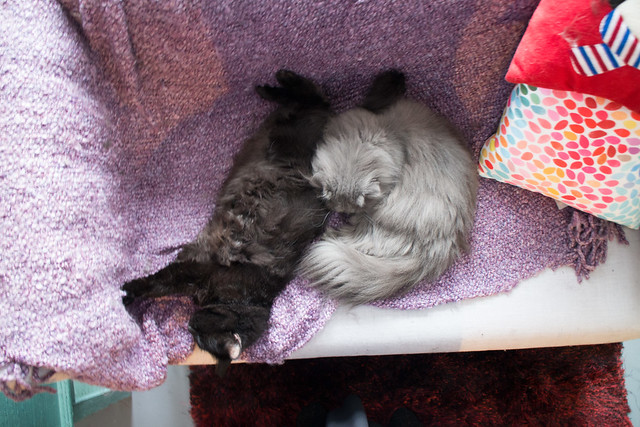 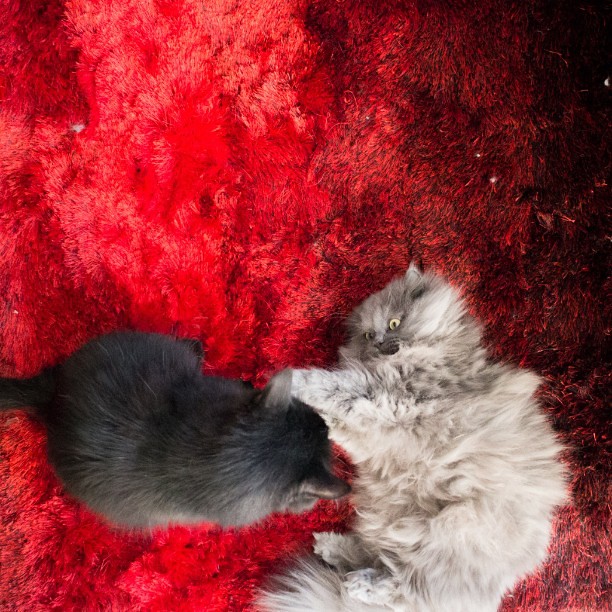 I hope you enjoyed watching the transformation of Brother Bear to our loving home.  We couldn’t imagine our lives without him.  Plus who would Goblin wrestle with? 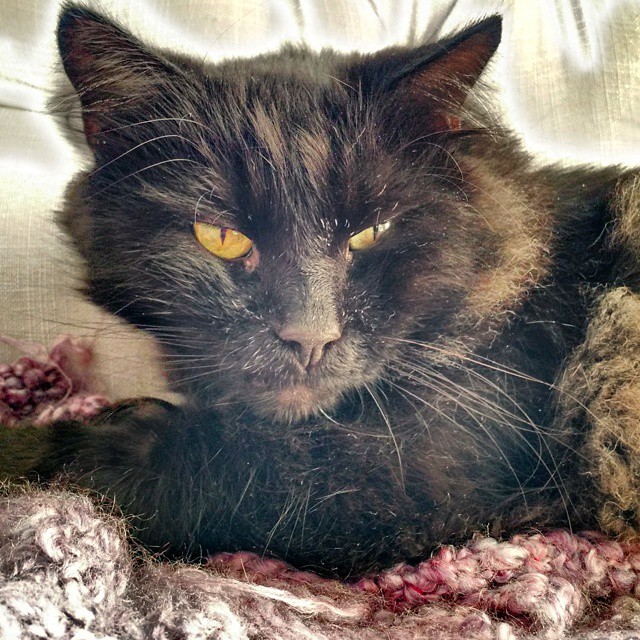 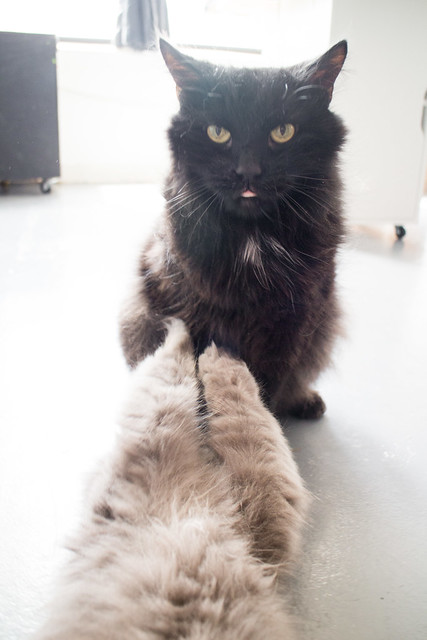