Have you found yourself recently shouting at a man you didn’t know “KILL HIM” or “DIE!”?  No?  Oh.  Well let’s change that.

A few weeks ago we found ourselves in a Medieval Castle wearing crowns enjoying jousting while eating meat with our bare hands.  If this doesn’t sound like the most fun ever, then I think you should change your definition of fun.

Medieval Times is a 11th century dinner theater restaurant.  Their motto is “Step back in time with epic battles, jousting tournaments, royal feasts, knights and romance.”.    There’s 9 of them located across the United States and Canada, and we happen to have one nearby in New Jersey.  Matthew and I have never been to a Medieval Times before so we were both pretty pumped.  Actually I should say we were never inside of a Medieval Times Castle but once Matthew in his teenage years stopped at this same one (!) when he drove from Ohio to New York City and took a picture of the castle in the parking lot.   So you can say we have been excited for over a decade.    Originally I planned on taking us to this for our anniversary (what doesn’t say I love you more than a royal feast?), but unfortunately a snow storm happened and a knight from the castle called me to tell me the castle would be closed that night. Bummer. So once the snow storm was gone, we made our way there the following week.

You will spot the Medieval castle a few roads away. At that time, no matter what your age, you will shout “I SEE THE CASTLE”. 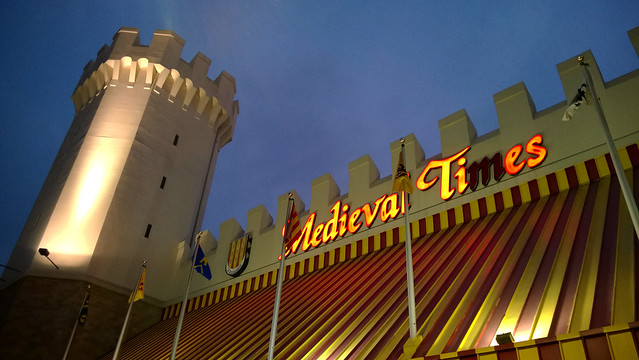 Speaking of age, there’s people who visit Medieval Times from all ages.  There’s plenty of young kids there, yes, but there’s also plenty of adults and couples there on date night. In fact I know some adults who rented party buses to Medieval Times.  These are the types of friends we all need.  I would say there’s equal adults to kids ratio, but I might even lean to say there was more adults than kids there on that night. It doesn’t really matter, we all want to see knights joust. 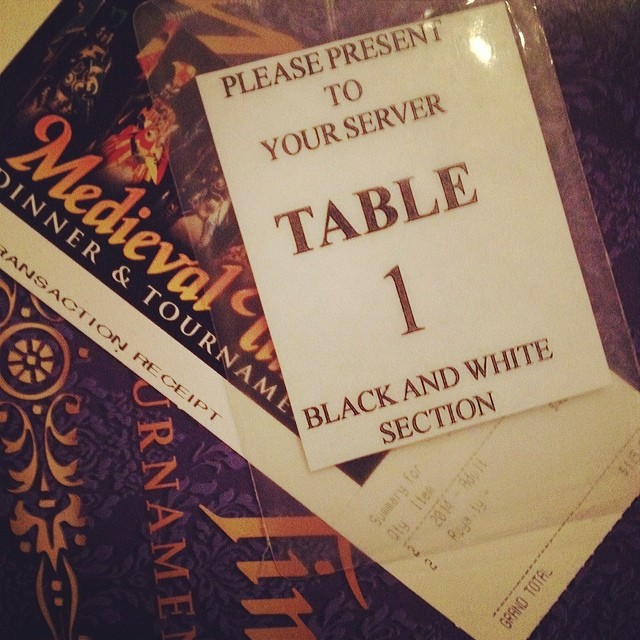 When you arrive you receive your table row which is where you will sit.   I upgraded us to a Royalty package so we sat in the first row.  Honestly though, there is no bad seat in the castle.  Also you’ll see it says “black and white section”.  That means we will be rooting for the black and white knight!  *CHEERS*. 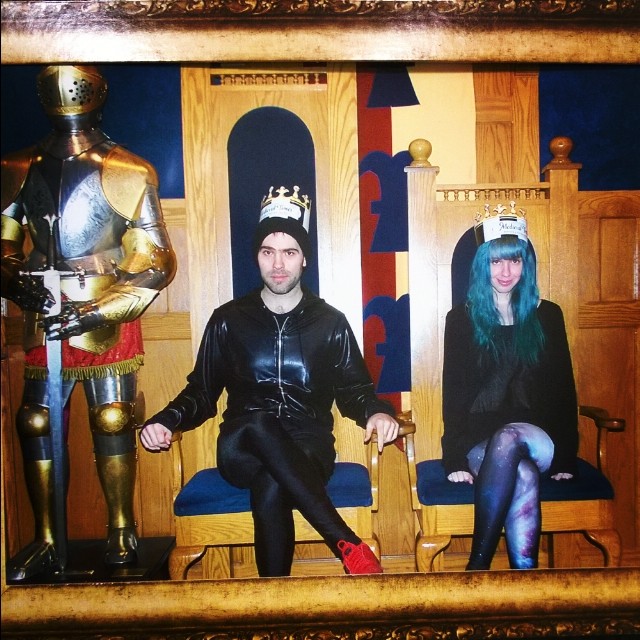 Then of course we had to have our picture taken immediately as king and queen.  There’s a option to spend a few bucks and dress up in costumes if you’d like to. I wonder if they would let us bring our own costumes next time because we have plenty of knight helmets and cloaks at home. 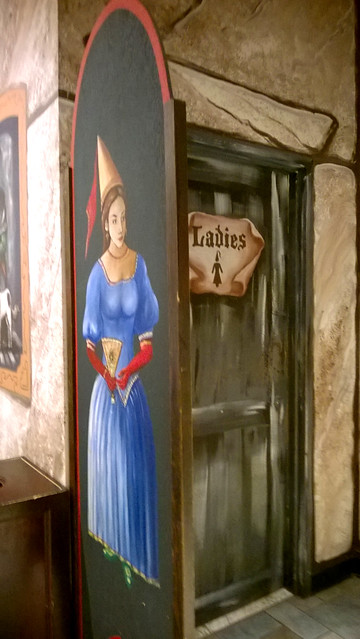 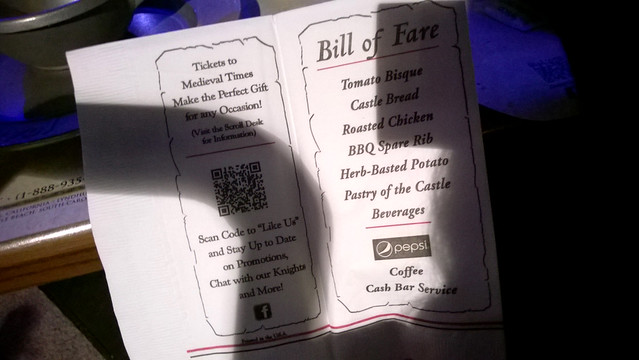 So once you’re in the castle, you’ll be seated by your waiter, either a Wench or a Serf.    Ours was a young guy and he was just the nicest.    Then you’ll be told your Bill of Fare. You will receive EVERYTHING off to the right.  I have to say, I was kind of blown away by how good the food was.  I was unsure of how it would be, but it was so delicious!    I can see why people come here a few times, because if I could I would just order that Tomato Bisque soup over and over and over again.  Also want to note that if you are a vegetarian, you’re ok.  Your Serf will ask you, so just tell them and you’re good to go.. but it’s not as much fun.. more about that later. 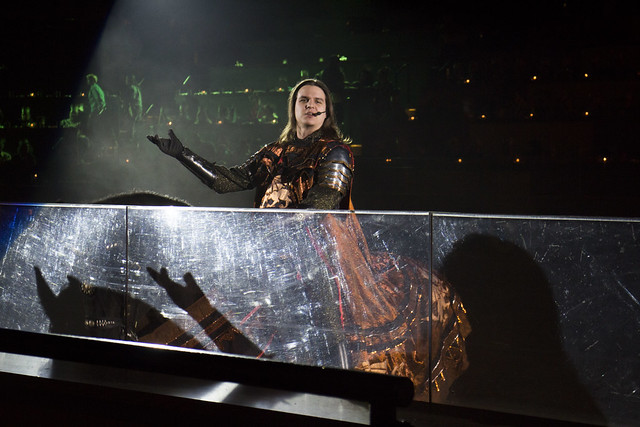 This guy was the host through the night, of course he had fabulous long hair.   The majority of everyone had amazing long beautiful hair in Medieval Times.  He will introduce the King and Princess and walk us through the medieval tournament, featuring horse dressage, a variety of skill games, and jousting. 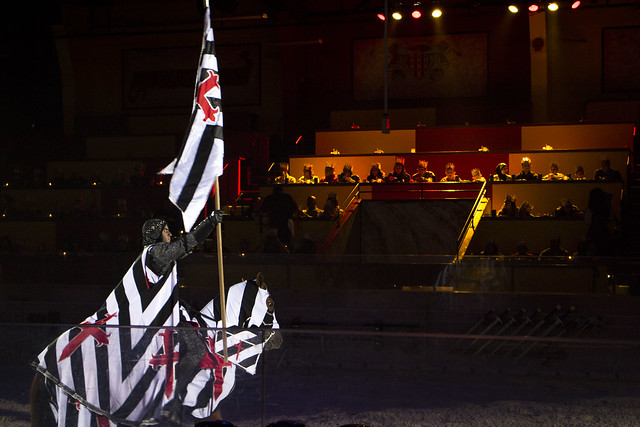 When the show begins each knight for each section will be introduced.  You will cheer your knight like he is your brother and heckle all the others like they are a enemy.  I have to say right up front, our knight didn’t have long hair.  I should have known this was a bad omen from the beginning. 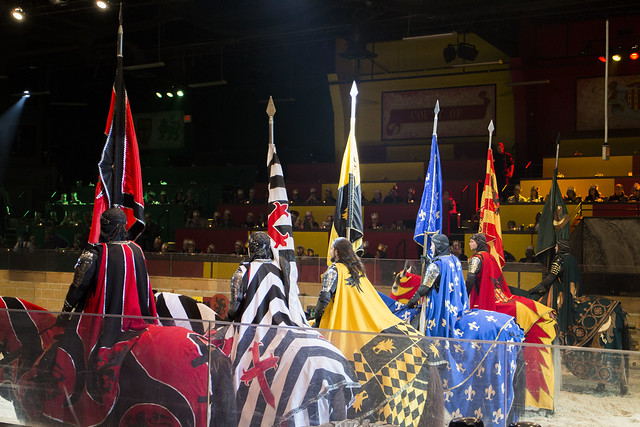 Here are all the knights lined up, receiving applause from the audience while being told about the tournament. 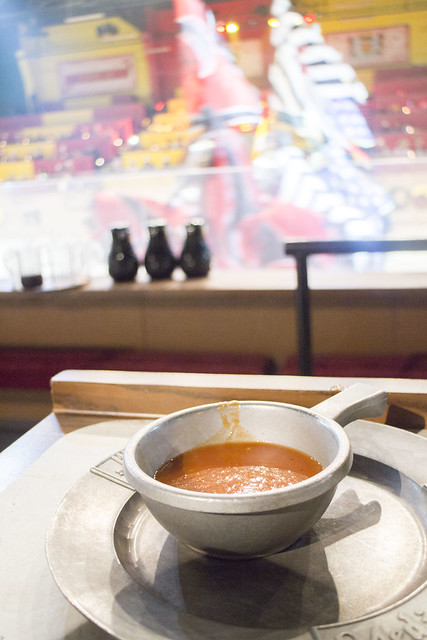 At this time your soup will arrive to start the feast.  Here’s the best part, there are no utensils here; everyone eats with their bare hands! I have to just tell you how much fun this is for a night.  Don’t think about  it, just dive in. All the food is pretty finger friendly, and things like soup have a handle, but it’s really fun!  If you are vegetarian I believe they give you lasagna for your main course instead of meat, but with that comes A FORK! The horror.  I say be brave and make them take your fork away and eat it with your hands!  Now about this Tomato Bisque soup, it was amazing.  Nothing else to say, but I wanted 10x the amount.  Matthew doesn’t like tomato soup and afterwards he asked me if I could make this tomato bisque soup.. so it’s that good. 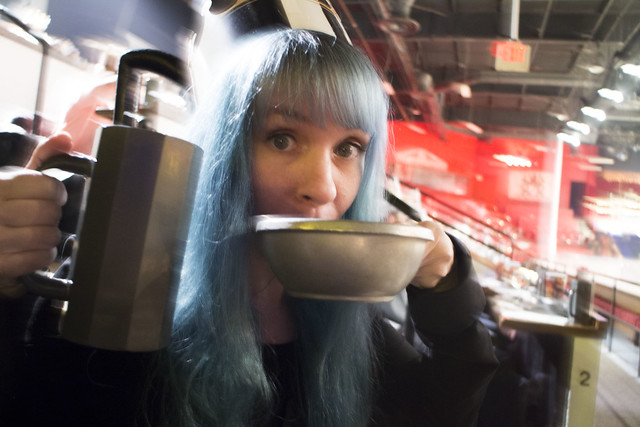 I’m having lots of fun!   They give you a crown to wear and a flag to wave.  Often I found myself with roasted chicken in one hand, flag in another, yelling things like “KILL HIM!” or “MAKE HIM DIE!”.    Just have fun, this is a adventure, yell things that you never would.  Get out all your frustrations.  You will find that everyone is yelling ridiculous things.  I had a man a few rows behind me who kept yelling “YOU SUCK KNIGHT!”.  It was beautiful.  Be proud of your knight, root for him! 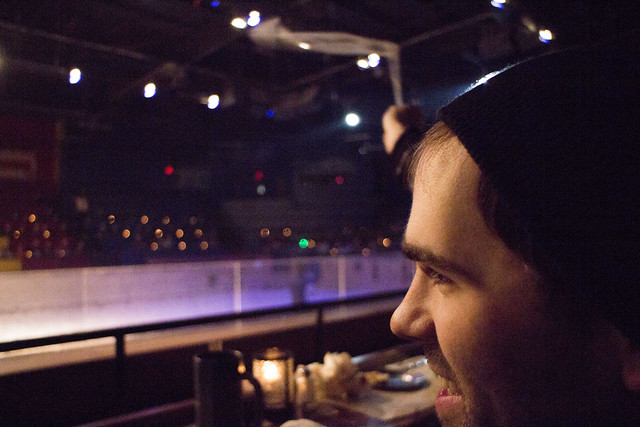 This is the face of fun. 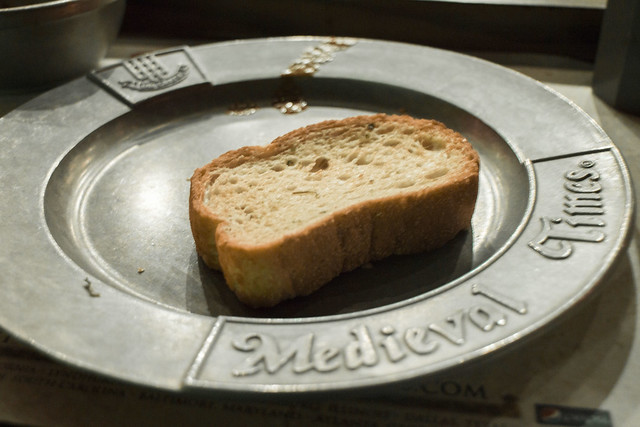 Then your castle bread will come which is just Texas Toast really.  It’s delicious because when isn’t garlic bread?  Just gobble it up. 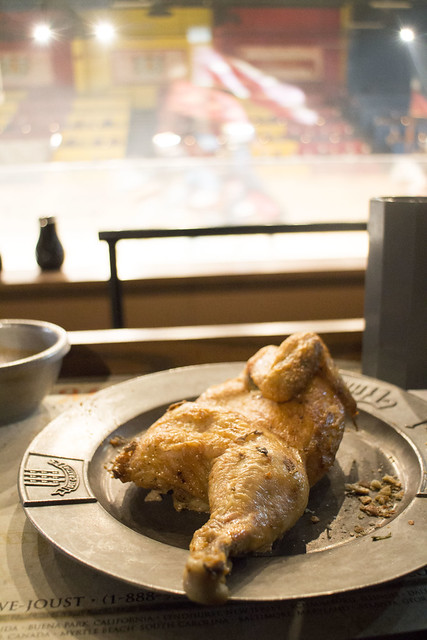 Here’s your roasted chicken and oh boy this was good!  Just pick it up and start biting away. 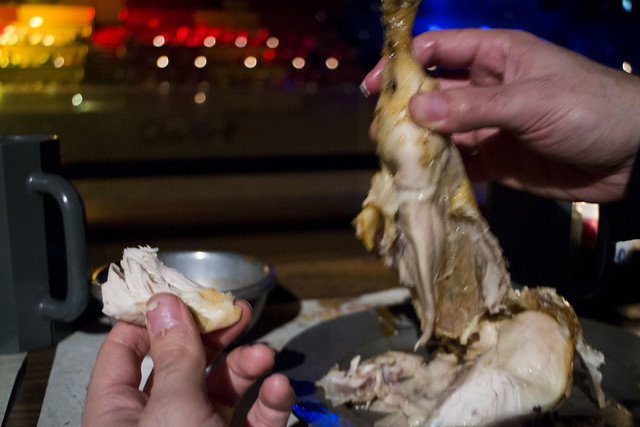 It’s so moist and juicy, you will love every minute of it.  (For those really scared, they do give you warm wet napkins after the show). 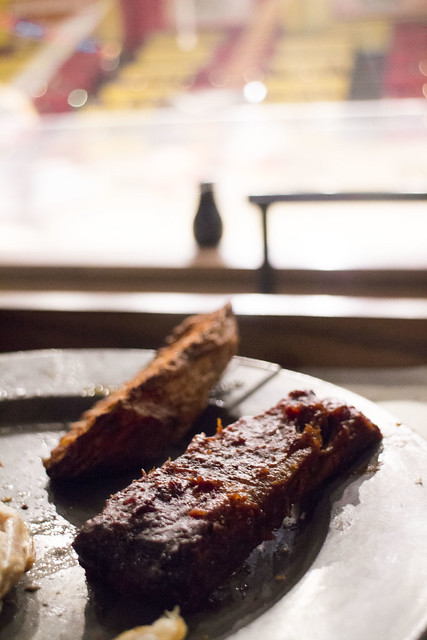 Then comes your BBQ Square Rib, delicious too.  By the end of the show, you will only want to eat with your hands for the rest of your life. 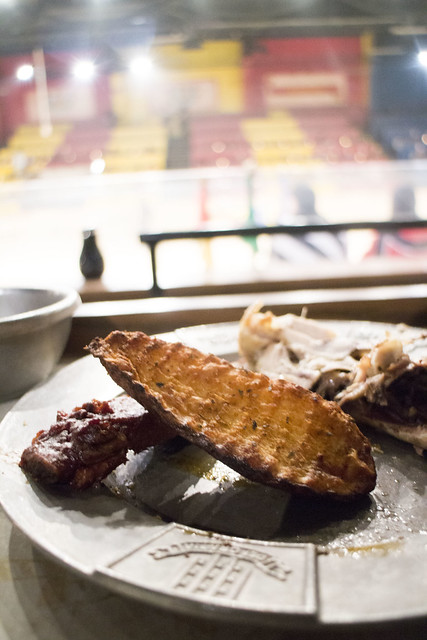 And your herb roasted potato is next.  The way they serve the food s is your serf/wench will just go row by row with a big container, throwing each person one item on their plate.   They are pretty good on timing to know when the next food item should come out, everything is warm too. 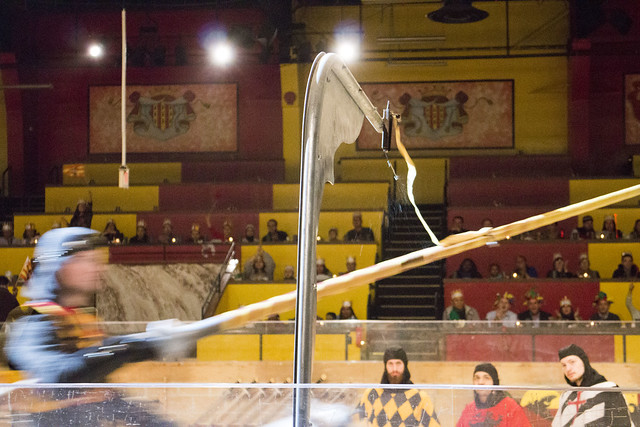 While I was feasting, knights were going through different events in front of me.   For a large section of the tournament they do roll down nets in front of the audience to both prevent dirt to be kicked up by the horses onto your food, and also to prevent a sword from cutting off your arm.  The swords are real, you will see sparks fly off them.   To be a knight, you actually need to train, first starting off as a squire and then working your way up.  I read a article that discussed that if a knight becomes sick, they will find another in the country and fly them out for the show, so it’s a select group of trained knights. 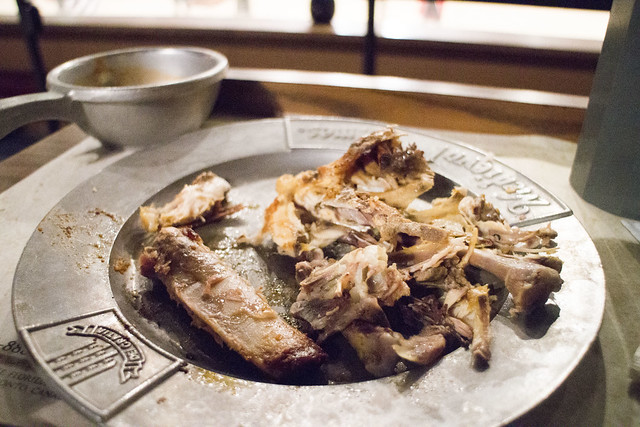 Watching knights joust while eating my chicken to the bone?  It doesn’t get more romantic than this on date night! 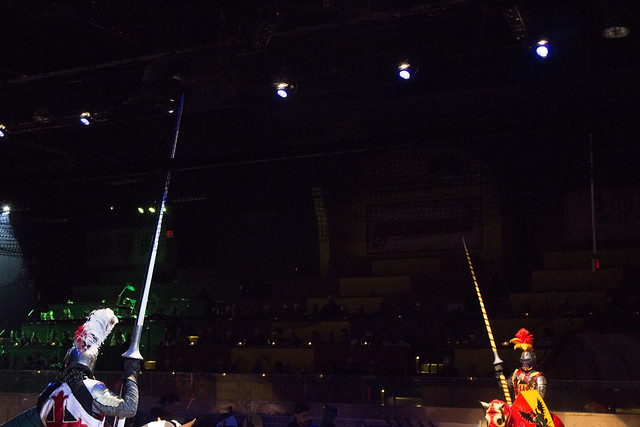 Then the jousting will turn serious! Helmets will be put on!  Men will be dramatically thrown off horses! 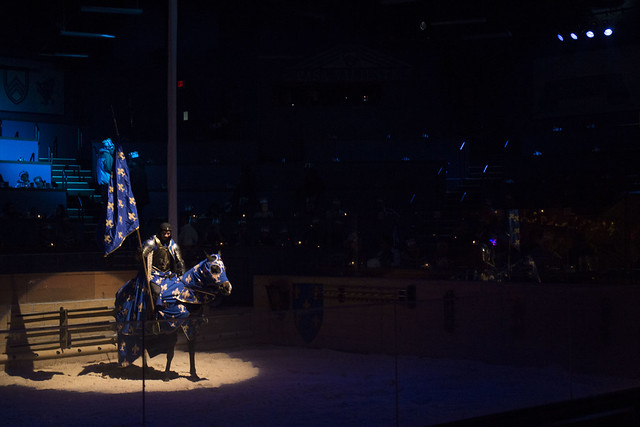 It will turn dark and dangerous, where only one knight will win.  I think by this time in the picture my knight was already defeated (possibly first, I blocked it out in my mind as I was so distraught) so I decided to root for the blue knight because look at how amazing him and the horse looks?   Nearly all their 400 horses are raised at their 241 acre Medieval Times’ Chapel Creek Ranch in Sanger, Texas. Per their website: “Training begins early. As weanlings, Medieval Times horses are introduced to lead ropes and halters. Saddles come at age 2. Long reins and simple exercises such as lunging follow. At age 3, the horses move to their new homes — one of our nine North American Castles — where they learn advanced-level dressage from a master horse trainer. Then life as a pampered performer begins. After a few years in the spotlight, the Medieval Times horses move back to the Chapel Creek Ranch. In the serene setting, we make sure our horses live out their lives in royal treatment.” From what I read online from multiple articles it seems like the horses are taken care of with utmost priority, so just want to throw that in there as a animal lover. 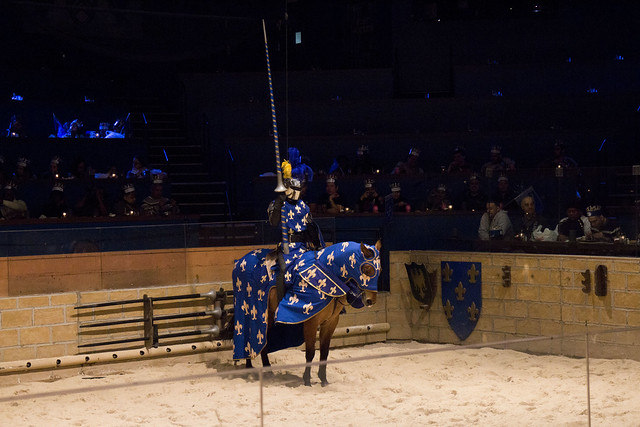 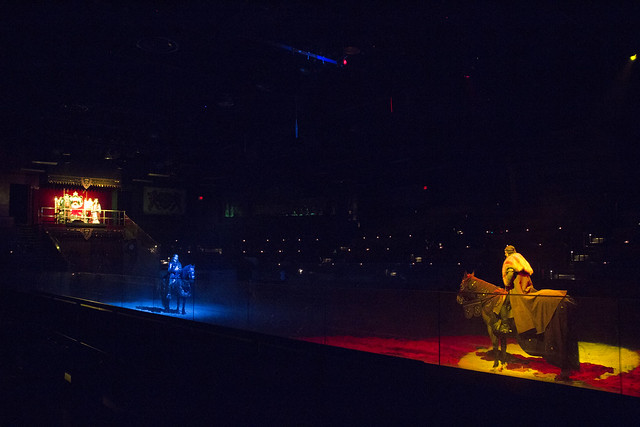 I don’t want to spoil the plot, but this will happen too.  You just have to go and find out why. 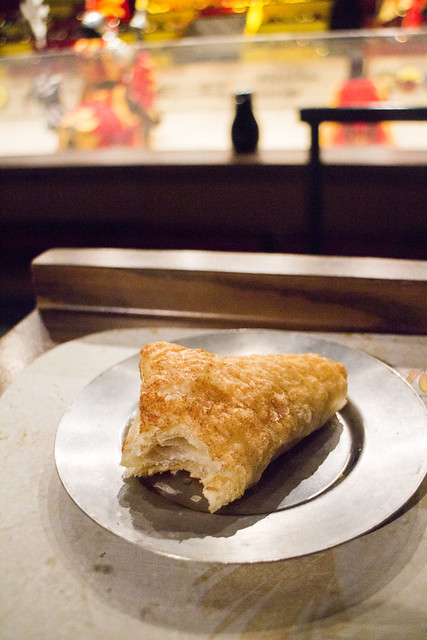 Before it ends you will be treated to dessert, a apple pastry, which like everything else, was delicious. 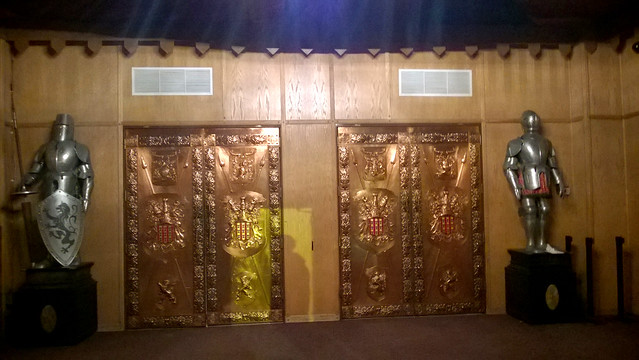 This was really fun and I recommend that if you are near one, or ever visit a city that has a Medieval Times, you should go too!

Have you ever been to a Medieval Times? Tell me about it!